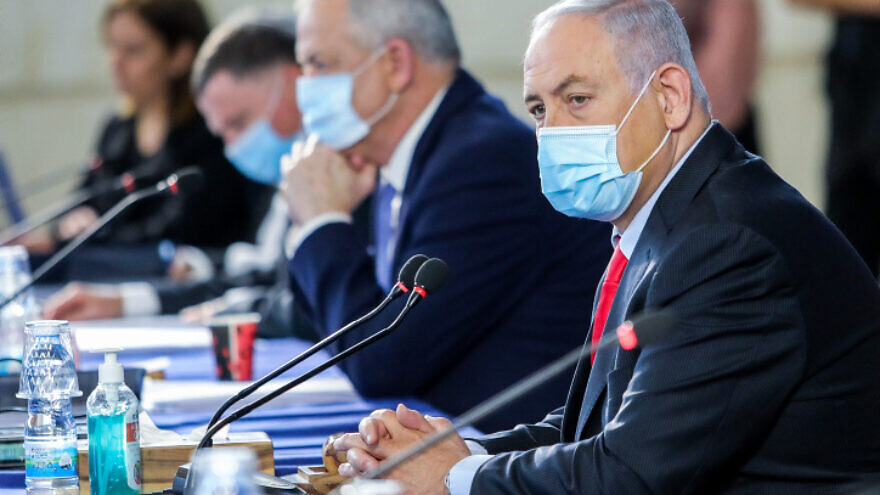 (June 23, 2020 / JNS) Israel on Monday approved a series of steps regarding the country’s handling of the coronavirus pandemic, including beefing up enforcement measures and authorizing the creation of a new national enforcement authority.

Among the steps approved following a meeting on Monday of the country’s so-called “coronavirus Cabinet” were an increase in the fine for not wearing a mask, from NIS 200 ($58) to NIS 500 ($145), stepped up enforcement by municipal inspectors and the creation of a new national enforcement body under the aegis of the Public Security Ministry.

In addition, testing and protective measures for at-risk populations, especially the elderly, will be increased, and the government will also evaluate, in coordination with the Civil Service Commissioner, the possibility of employees returning to work in “capsules,” meaning restricting the numbers of workers in any particular workplace.

School activity and private camps during the summer months were also approved.

In addition to the stepped-up enforcement measures, the Cabinet unanimously approved the setting of an “outbreak scenario,” according to which the health system will be instructed to prepare for an additional 2,000 intubated COVID-19 patients, as well as an additional 2,000 patients requiring intubation for other illnesses.

According to a statement put out by the Prime Minister’s Office, this scenario’s purpose is to guide preparations and procurement by the health establishment and does not constitute a forecast. Israeli Prime Minister Netanyahu, who chaired Monday’s meeting, stressed that all preventive measures must be taken to avoid reaching the outbreak scenario.

At the opening of Monday’s meeting, the Israeli prime minister said, “We are facing a systematic increase in morbidity. We see this not only here, but I regret that we also see it around the world. Various countries have already been forced to deal with this, and we here in Israel as well.”

The number of active COVID-19 cases in Israel has surged in recent days to more than 4,940, with 45 people in serious condition and 29 patients requiring intubation as of Tuesday morning. To date, 309 Israelis have died of the disease.

The number of cases has risen over the past two weeks as the country has reopened its economy, and the daily figure has now reached between 200 and 300, up from a single-digit low in mid-May.