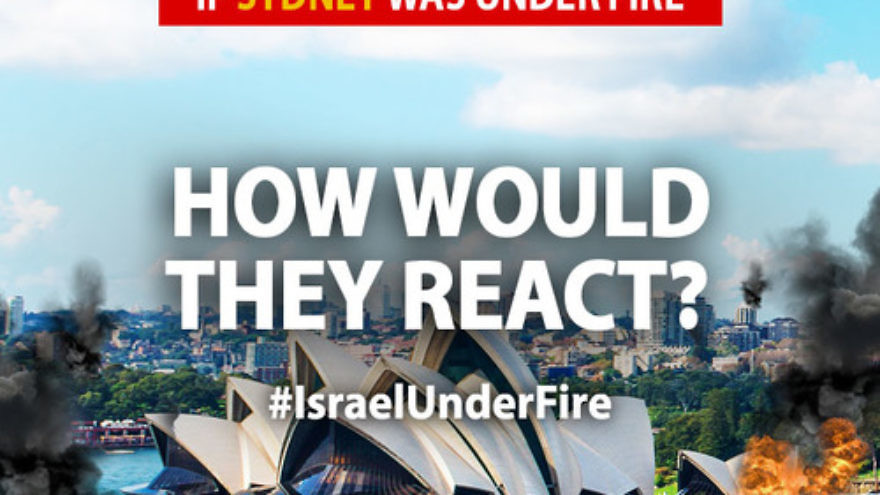 Click photo to download. Caption: One of the images posted by the "Israel Under Fire" student initiative of the Interdisciplinary Center Herzliya (IDC) college and graduate school. Credit: Israel Under Fire.
Republish this article
1071 WORDS
Spread the word.
Help JNS grow!
Share now:

Australia’s Sydney Harbor is up in flames. Large letters superimposed on the scene ask, “How would they react?”

That image and many others like it have been distributed by an Israeli student initiative called “Israel Under Fire,” which now boasts more than 57,000 followers on its Facebook page. While rocket attacks continue from Gaza after Palestinian terrorists’ rejection of a cease-fire brokered by Egypt and accepted by Israel, more than 400 student volunteers are working together from a computer room at the Interdisciplinary Center Herzliya (IDC) college and graduate school to present the world with Israel’s position on the ongoing conflict with Hamas.

“We really believe that today the real war takes place on the Internet,” Israel Zari, the student union spokesman at IDC, told JNS.org.

The first Israel Under Fire student operation at IDC was held during Israel’s November 2012 conflict with Hamas, which saw the Israel Defense Forces (IDF) conduct Operation Pillar of Defense in Gaza. The student initiative was reopened as soon as the IDF launched its current operation, Protective Edge. This time the campaign has its own website, Israelunderfire.com, where the students accumulate all of their information via text, videos, and memes.

Despite their initiative being a private one, Israel Under Fire’s students work in conjunction with guidelines and rules from the Israeli Prime Minister’s Office and Ministry of Foreign Affairs, as well as the IDF Spokesperson’s Unit.

“This is the largest private [media] operations room in Israel,” Zari said. “Our goal is… to present a unified front.”

The students work around the clock in groups. Each group is dedicated to a different skill, such as graphic design and research. There are also many international students who translate the content into various languages.

Given the current situation, the students are currently focusing on promoting the message that Israel “would welcome a cease-fire” and would like “to finish the military operation,” Zari said.

They also want to show that Israel froze its weapons and strikes, “but on the side of Hamas this did not happen, despite all the mediation efforts,” he said.

The students’ posts have included images of the warnings that the IDF sends to Gaza citizens before airstrikes and examples of Israel’s humanitarian efforts, in order to show to the world that Israel’s goal is not to hurt citizens.

On the other side of the media war, Palestinian groups and activists are promoting the opposite perspective. According to Itamar Marcus, director of Palestinian Media Watch, Palestinian Authority President Mahmoud Abbas is not personally supporting Hamas rocket attacks on Israel, but Fatah—the movement he heads—is spreading a violent anti-Israel message on Facebook.

In a Tuesday post on the official Fatah Facebook page, “a poster claiming to be from the Al Aqsa Martyrs Brigades, the military wing of Fatah, called for renewing suicide terror attacks against Israel,” Marcus said.

The post stated, “Today Palestine is waiting for its men… our promise of the [Al-Aqsa Martyrs] Brigades is to cause the enemy to tremble, who only understands the language of blood, bullets, explosive belts and Martyrdom seeking [suicide] actions… We call to perform Martyrdom-seeking actions [suicide attacks].”

Earlier in July, Fatah announced in a Facebook post that Hamas, Fatah, and Palestinian Islamic Jihad are “brothers-in-arms,” united by “one God, one homeland, one enemy, one goal,” through an image showing three fighters from the three organizations’ military wings.

Additionally, in a recent video produced by Fatah’s military wing the Al-Aqsa Martyrs Brigades and posted on Facebook, Abbas’s movement warns the Israeli government and the Israeli people, “Death will reach you from the south to the north. Flee our country and you won’t die. The KN-103 rocket is on its way toward you.”

Meanwhile, independent Palestinian activists are continuing to wage their own battles on social media. For instance, the Facebook page “Stand Up for Palestine” uses “Israel is a war criminal” as its tagline and posts memes such as an image of screaming children being threatened by a knife, with the headline “Gaza Holocaust.”

At IDC, some of the students are specifically responsible for monitoring and exposing false information distributed by pro-Palestinian activists.

Zari points to just one example of many, a video that gained popularity on the Internet with “a horrible picture of a woman with an exploded head” and an accusation by a Palestinian activist that the IDF is murdering innocent people. In their research, the students realized that the photo is actually taken from a Hollywood movie.

When the students first launched the media operation during Operation Pillar of Defense, they worked hard to build a reputation for the initiative in Israeli society, primarily via word of mouth exposure and coverage by Israeli news outlets.

Now that the media operation is taking place for the second time, “there’s a lot more public faith in what we’re doing,” and many people actually forward materials to the group for broader dissemination, Zari said.

Although the students initially intended to open the media operation only during violent escalations in the Israeli-Palestinian conflict and IDF operations, there are discussions on trying to maintain the operation over the long run. Israel really needs to promote its message with publicity “because it is being presented many times in a very problematic way in media outlets,” said Zari.

The success of the student initiative is also being closely measured through website analytics on the number of visitors, their frequency, and where they are coming from.

“We see there’s growth [in Web traffic] from all over the world,” Zari said. For instance,  there was a recent 400-percent growth in visitors entering the website from Russia, leading to a decision to add more Russian-language content.

The students also see a growth in volunteers for and media coverage of their cause, which Zari said “proves to us the website is doing its job and the operation is fulfilling its goals.”