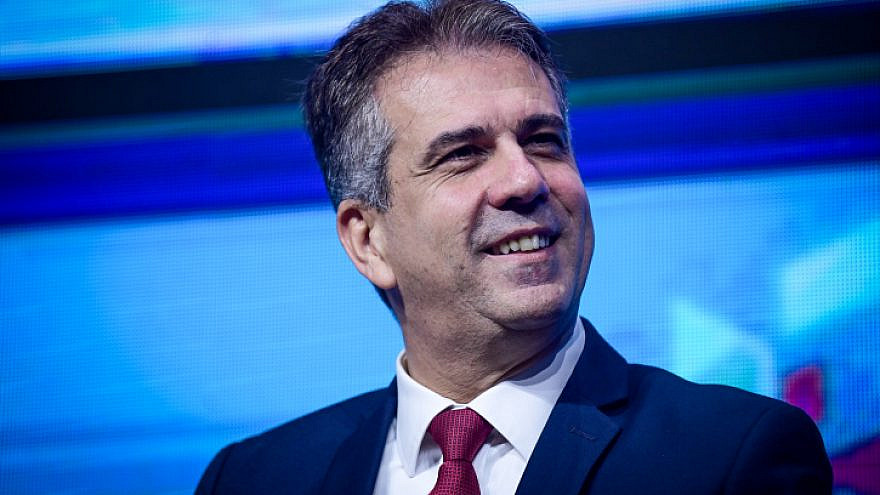 (January 19, 2023 / JNS) Israeli Foreign Minister Eli Cohen accepted an invitation to visit Ukraine during a conversation on Thursday with his counterpart in Kyiv.

Cohen would be the most senior Israeli government official to visit Ukraine since the country was invaded by Russia last February.

It remains unclear when the trip will take place.

During the call with Ukrainian Foreign Minister Dmytro Kuleba, Cohen also pledged to permanently reopen Israel’s Embassy in Kyiv within 60 days, said the report. The embassy has been open only intermittently, with staff sometimes working from Poland.

Cohen also urged Ukraine to up its efforts to confront Iran, which has been providing drones and other weapons to Moscow, and in particular to encourage European nations to designate the Islamic Revolutionary Guard Corps a terrorist organization.

The European Parliament on Wednesday voted 598-9 in favor of requesting the European Union blacklist the IRGC.

That came after Cohen in his inaugural speech said that officials in Israel’s new government would talk less in public about the war in Ukraine.

Israel has shied away from arming Ukraine over fears of upsetting Russia, the leading player in Syria, where the IDF has in recent years conducted hundreds of strikes aimed at curbing Iran’s military entrenchment and the transfer of weapons to Hezbollah there and in Lebanon.

For his part, Lavrov sparked outrage on Wednesday by accusing the West of using Ukraine as a “proxy” in the pursuit of a Nazi-like genocide.

“Just as Napoleon mobilized practically all of Europe against the Russian Empire, just as Hitler mobilized and captured…the majority of European countries and sent them against the Soviet Union, now the United States has organized a coalition,” Lavrov said. “Through Ukraine as a proxy, they lead the war against our country with the exact same goal, the goal of the final solution to the Russian question. Just as Hitler wanted to finally solve the Jewish question.”