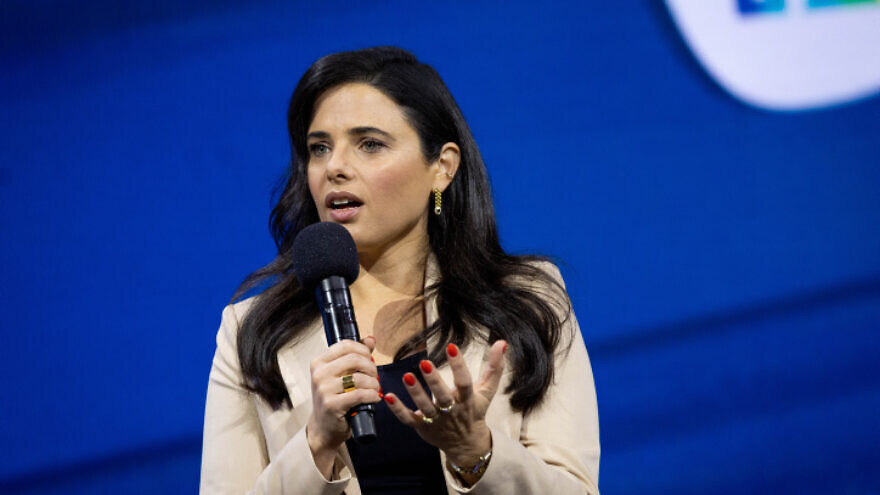 (March 7, 2022 / JNS) Some 15,000 Ukrainian refugees could enter Israel by the end of the month if the current pace of immigration continues, according to Israeli Interior Minister Ayelet Shaked, who vowed on Monday to reevaluate the country’s policy on the issue.

“Israel is the Western country without a land border with Ukraine that has absorbed the most Ukrainians per capita since the outbreak of fighting,” she said on Sunday at the weekly Cabinet meeting.

Shaked stressed on Monday morning in interviews with Israeli media that the country would need to reevaluate its refugee policy in order to be able to handle the number of people trying to escape war-torn Ukraine by coming to Israel.

“There is no country that can open its gates to anyone who wants without any restrictions, certainly not a country as small as Israel,” Shaked told KAN News.

So far, more than 2,000 Ukrainian nationals have entered Israel, according to Shaked. During a single day during the weekend, she said, 605 entered.

“According to this data and the rate of increase, we are en route to 15,000 Ukrainians by the end of the month, 90% of whom are not eligible to be included under the Law of Return,” she said.

Israel is already planning and prepared to take in as many 100,000 Jews and their extended families from Russia and Ukraine who are eligible for citizenship under the Law of Return, which, she said, was already going to prove a “very great challenge.”

“Contrary to what is being said in the media, the State of Israel has a broader policy than almost any Western country that does not share a land border with Ukraine,” Shaked added. “No country in the world that doesn’t have a visa exemption has as broad a policy as Israel. … We need to focus and be prepared accordingly and deal with the number of humanitarian cases that we will decide on in the coming days.”

Other countries, including the United States and Canada, do not allow people from most other places to board a plane to them without a visa.

He said that the country’s “internal bureaucracy cannot create obstacles” and that worlds must be overturned in order to enable smooth entry for Jews looking to resettle.

Bennett said that two things must be assured: Jews in distress are reached and that, when they do arrive, they are integrated into Israel in the best way possible.

The decision to let in refugees has sparked a public debate, including in the upper echelons of the government, with some ministers saying it is Israel’s responsibility to take in the refugees—no matter how many—and others believing that the number must be capped to preserve Israel’s Jewish character.

“We need to stop breast-beating and shouting, ‘We are guilty; we have been wronged; we have sinned,” said Justice Minister Gideon Sa’ar on Sunday. “We did not blame. We have not sinned. We were not wronged. We are fine.”

He highlighted Israel’s strong humanitarian response to the situation, including sending tens of thousands of dollars in aid and medical teams to the borders, in addition to absorbing Jewish refugees.

“The role of the State of Israel is to absorb those entitled by the Law of Return,” Sa’ar stressed. “There is no reason for the national masochism reflected in the discourse.”

In contrast, Transportation Minister Merav Michaeli said that Israel must do all it can to make entry into the country as easy as possible for all refugees, including removing a required 10,000-shekel ($3,040) entrance fee for Ukrainian refugees who are able to enter the country through the Law of Return.

“The awful sights of those who are waiting for the process to be completed cannot be how the State of Israel looks and we must find an immediate solution,” Michaeli said.

Diaspora Minister Nachman Shai, who left on Monday for a visit with his Polish counterpart, also called on the country to “cancel the inhuman and immoral 10,000-shekel deposit demand from Ukrainian refugees.”

He said that “it automatically restricts the entry of refugees to Israel who do not have relatives and do not have the means to meet this demand.”

In addition, Michaeli said that people whose status is being reviewed for remaining in Israel should be provided with accommodation “that was used for coronavirus patients so that all … receive decent shelter until the process is complete.”