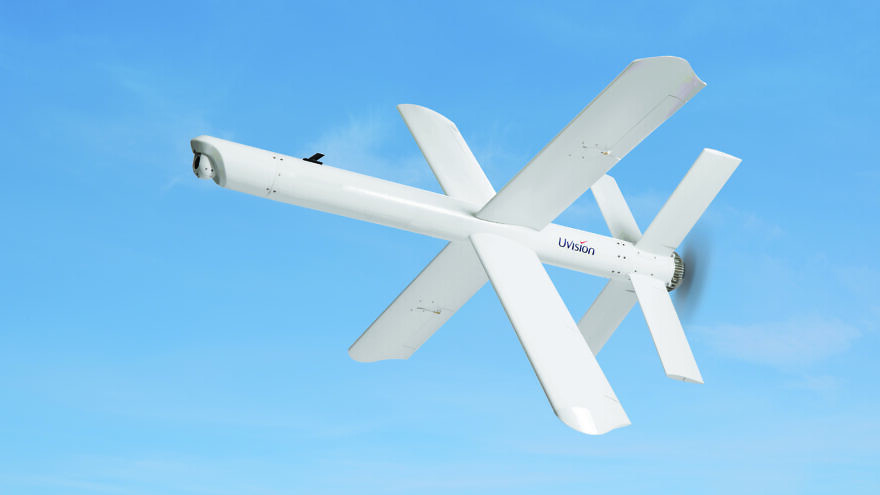 (November 12, 2021 / JNS) The Israeli defense company UVision Air Ltd., which supplies its high-tech loitering munitions to the Israel Defense Forces, the U.S. Marines and the Indian military, is eying new markets as the world wakes up to this relatively new type of weapon.

Up until the 2020 war between Armenia and Azerbaijan over Nagorno-Karabakh, only large, modern and flexible militaries had been evaluating loitering munitions. But the widespread use of loitering munitions during that conflict made it clear to the world’s militaries that this type of weapon will soon become inseparable from the modern battlefield.

“Everyone who observed this war understood the significance of loitering munitions,” Dagan Lev-Ari, sales and marketing director at UVision, told JNS. “Today, there is interest in it all over the world.”

This is true not just for Western militaries; Iran has begun using this type of technology, and Russian defense companies have begun producing them as well.

According to Lev-Ari, loitering munitions are specifically designed to engage small time-sensitive targets that appear and vanish quickly, often in civilian settings—just the type of targets that characterize the contemporary battlefield.

‘It lets you deal with modern battlefield challenges’

Guided missiles can offer precision firepower, but if reality changes while the missile is in the air—such as the targets going behind a wall or civilians suddenly emerging on the scene—the most that can be done is to divert the missile sideways to deliberately miss, explained Lev-Ari.

An alternative option is to rely on armed large unmanned aerial vehicles (UAVs), though these require their own expensive infrastructure, an airfield, trained personnel and money for maintenance.

Soldiers in the field must request UAV back-up, wait until the UAV reaches them and communicate with it “to make sure it doesn’t fire on them and that it sees the same target,” he added.

Loitering munitions, said Ben-Ari, combines these two capabilities together. Smaller models can fit on soldiers’ backs. Field units using them no longer need to request UAV support or depend on others for aerial firepower.

“You can place it on the ground, launch it towards the sector and not know exactly where the target location is. You can just know that it’s generally ‘there,’ ” he explained. “The loitering munition will then start circling around the target area. Now it flies like a UAV, and the operator can use its camera and infrared sensor to zoom in and out—to do what is necessary to find the target.”

This provides enough time to decide how and when to strike the target. If civilians are in the area, the strike can be postponed. “Once you decide you want to attack and something happens last minute—like a child entering the area—you can still abort, fly up to the sky and become a UAV again,” said Ben-Ari. “This combination is what turns the system from UAV to missile, back to UAV and then back to missile again. It lets you deal with all of the modern battlefield challenges, and is much more affordable and easier to operate than heavier systems. And the field unit has full independence,” he added.

Some of UVision’s loitering munitions, known as the Hero series, come with parachutes enabling them to be retrieved from the battlefield intact if they are not used to strike.

The Hero family has an array of explosive sizes and ranges with some fired from the field, some from vehicles and others from ships.

“The same soldier with the same control equipment can operate the smallest and largest loitering munition,” said Ben-Ari. “Additionally, someone else can send a soldier in the field a loitering munition, and the soldier can take responsibility for it in the air.”

This quality holds special significance for special forces that especially need to travel light. For example, Marines making a beach landing, where they are at their most vulnerable, and with plenty of equipment on their back, can be sent a loitering munition from a ship further back at sea, and assume control over it at it hovers above.

Ranges are determined by antenna sizes and communications systems. The smallest systems have a range of 10 kilometers; others launched from vehicles or ships have a 40-kilometer range; and the largest ranges, for ship-launched systems, reach 150 kilometers.

“An individual soldier can use this to destroy a tank from 10 kilometers away,” said Ben-Air.

In June, UVision and its American business development partner, Mistral, announced that they had been chosen to supply the Hero-120 loitering munition for the U.S. Marine Corps Organic Precision Fire Mounted (OPF-M) System.

The system will be integrated with American vehicles that serve the Marines—amphibious armored reconnaissance vehicles and the Joint Light Tactical Vehicle—as well as with an unmanned sea vehicle.

“Due to the large quantities of systems that we will supply, we will shortly begin production in the U.S.,” said Lev-Ari. Meanwhile, the company has reached an agreement to supply the Indian military as well; here, too, the Israeli company will partner with an Indian company to begin production in India.

According to a joint statement, the agreement “leverages both companies’ capabilities to provide the European market with precise, combat-proven weapon systems. The Hero family of loitering munitions will be available to European customers to satisfy contemporary and emerging operational requirements.”

Lev-Ari said, “In Europe, our agreement with Rheinmetall allows us to better enter the European market. Rheinmetall is a big defense producer in Europe. Once it takes our products into its portfolio, this provides us with a big advantage.”

Under the vision underlying the agreement, armored personnel carriers made by Rheinmetall will fire Hero type loitering munitions, and the German company will be able to provide professional and technical instruction to European clients.