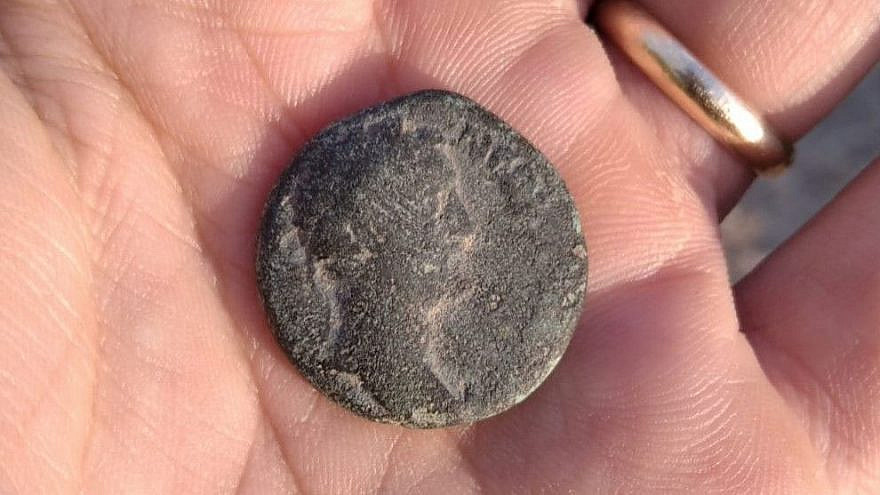 The rare coin, bearing the head of the Roman Emperor Antonius Pius and dating from 158–159 C.E., which was found during a training exercise by an Israel Defense Forces soldier. Feb. 9, 2021. Credit: Israel Antiquities Authority.
Spread the word.
Help JNS grow!
Share now:

(February 9, 2021 / JNS) A rare coin bearing the head of the Roman Emperor Antonius Pius and dating from 158–159 C.E. was found during a training exercise by an Israel Defense Forces soldier on the southern end of Mount Carmel, the Israel Antiquities Authority (IAA) reported on Tuesday.

The well-preserved coin, found by Ido Gardi, is one of very few such objects that have been discovered in Israel, according to the IAA.

“This coin joins only 11 such coins from known locations in the National Treasures Department collection. All the coins were found in northern Israel, from Megiddo and Zippori to Tiberias and Arbel,” said Dr. Donald Tzvi Ariel, head of the Numismatics Department of the IAA.

The reverse side of the coin shows the Syrian moon god “Men” with a legend stating “of the people of Geva Phillipi, and is also marked with the year 217, which corresponds to 158–159 C.E. 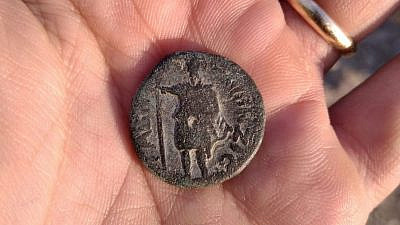 The reverse side of the coin shows the Syrian moon god “Men” with a legend stating “of the people of Geva Phillipi” and is marked with the year 217 (158–159 C.E.). Credit: Israel Antiquities Authority. 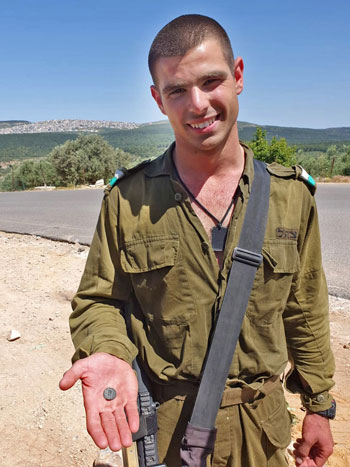 IDF soldier Ido Gardi with the rare Roman coin that he found during a training exercise. Credit: Israel Antiquities Authority.

“The coin discovered is one of the municipal coins minted in the city of Geva Philippi, also known as Geva Parashim,” said Avner Ecker, a lecturer in classical archaeology at Bar-Ilan University’s Department of Land of Israel Studies and Archaeology. “In the Roman period, cities (poleis) were granted the right to mint their own coins. The year marked on the coin is the year when the municipal council was evidently established and its citizens were allowed self-government under the Roman Empire.”

Ecker explained that Geva was an ancient settlement that was mentioned by the Roman-Jewish first-century historian Josephus as a town located on the foothills at the edge of the Jezreel Valley.

“Herod [the first-century BCE Roman ruler of Judea] settled his cavalry forces there; hence the name Geva Parashim, ‘City of Horsemen,’ ” said Ecker, “and in the Great Revolt, in 66–70 C.E., local and Roman forces set out from there to fight Jewish rebels near Bet Shearim.”

Ecker said that some believe that Geva is located near Sha’ar HaAmakim, but most scholars identify the site as Tel Abu Shusha, near Kibbutz Mishmar HaEmek, adding, “Excavations conducted by Bar-Ilan University on the tel last summer unearthed remains of fortifications and buildings dating from the Hellenistic to the Byzantine period.”

Nir Distelfeld, an inspector for the IAA Northern District’s robbery prevention unit, thinks that the coin was most likely lost by its owner on one of the roads that cross the area until it was found by Gardi almost 2,000 years later.

Distelfeld said that reporting such finds adds invaluable data for scholarly research and hoped that others would follow Gardi’s example in turning over ancient relics to the IAA.

Gardi received a certificate of appreciation for the find from the IAA’s National Treasures Department.