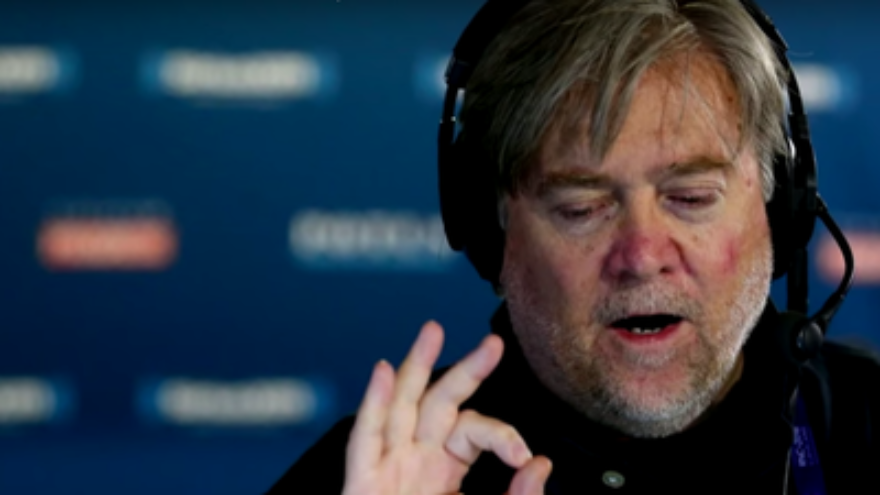 Going on the offensive against Bannon, the former executive chairman of Breitbart News, Anti-Defamation League (ADL) CEO Jonathan Greenblatt had said earlier this week that it is “a sad day when a man who presided over the premier website of the ‘alt-right’—a loose-knit group of white nationalists and unabashed anti-Semites and racists—is slated to be a senior staff member in the ‘people’s house.’”

But Thursday, the ADL issued a new backgrounder on Bannon that states, “We are not aware of any anti-Semitic statements made by Bannon. In fact, Jewish employees of Breitbart have challenged the characterizations of him and defended him from charges of anti-Semitism. Some have pointed out that Breitbart Jerusalem was launched during his tenure.”

Nevertheless, the ADL backgrounder continued to target Bannon by association, calling him the “chief curator for the alt right. Under his stewardship, Breitbart has emerged as the leading source for the extreme views of a vocal minority who peddle bigotry and promote hate.”

The ADL, the National Council of Jewish Women (NCJW), and other Jewish groups opposed Bannon’s appointment, charging him with anti-Semitism based on a claim by Bannon’s ex-wife in divorce papers that the incoming White House official didn’t want to send his children to a school with Jewish kids—a statement Bannon denies making. Jewish groups also cited alleged anti-Semitic overtones in a controversial Breitbart.com headline for a story written earlier this year by David Horowitz, the Jewish founder of the conservative-leaning David Horowitz Freedom Center foundation.

Nancy Kaufman, NCJW’s CEO, told JNS.org that her organization initially called out Bannon based on “a great deal of research on Breitbart” and information from the ADL, which proceeded to back down from the anti-Semitism charge Thursday.

“We know of the ties to the white nationalist movement, they’ve been well-documented, and we’re very aware of the comments that have been made by Mr. Bannon that promote xenophobia, racism, and homophobia. [Breitbart is] a platform for the alt-right, [Bannon] has called it that,” Kaufman said.

Yet Kaufman told JNS.org Thursday that following the ADL’s clarification, she “will be hesitant to use the word anti-Semite going forward” when commenting on Bannon.

“We trust the research of the ADL and we relied on this as well. We will be much more careful not to use that word, but I will use the other words to describe him,” said Kaufman.

Kaufman cited May’s episode in which Breitbart came under fire over Horowitz’s non-commissioned piece that carried the headline, “Bill Kristol: Republican Spoiler, Renegade Jew.” The article criticized Kristol, a neoconservative political analyst, for being among the Republican activists who vocally opposed Trump’s presidential candidacy. Horowitz wrote Nov. 14 that he had penned May’s piece because “Kristol and his friends betrayed the Republican Party, betrayed the American people, and betrayed the Jews when he set out to undermine Trump and elect the criminal Hillary Clinton.”

Harvard University emeritus law professor and pro-Israel advocate Alan Dershowitz, who is a Democrat, said the “Renegade Jew” headline—which Horowitz claimed as his own—was “ill-advised.” But the headline, Dershowitz told Breibart this week, “doesn’t suggest to me anti-Semitism. It suggests to me a degree of carelessness.”

Matt Brooks, the Republican Jewish Coalition’s executive director, said that while he hasn’t met Bannon, “The people who have worked with Bannon…said there’s absolutely not an inch of an anti-Semitic bone in Steve Bannon’s body.”

Brooks’s comments came during a panel discussion Monday at the General Assembly of the Jewish Federations of North America in Washington, D.C.

“We know that Breitbart has been unabashedly pro-Israel in their writings,” Brooks said. “They have been against the Iran deal…under Bannon’s leadership, Breitbart opened a Jerusalem office…There’s a lot of stuff out there…we really need to take a step back and see how this issue works out.”

Dershowitz said it is “not legitimate to call somebody an anti-Semite because you might disagree with their policies,” Breitbart reported. He added that he “hasn’t seen any evidence of personal anti-Semitism on the part of Bannon.”

On the contrary, Dershowitz said his former researcher—an Orthodox Jew and a committed Zionist—has worked closely with Bannon, who “has been supportive of Israel.” The respected lawyer also said, “I don’t think anybody should be called or accused of being anti-Semitic unless the evidence is overwhelming.”