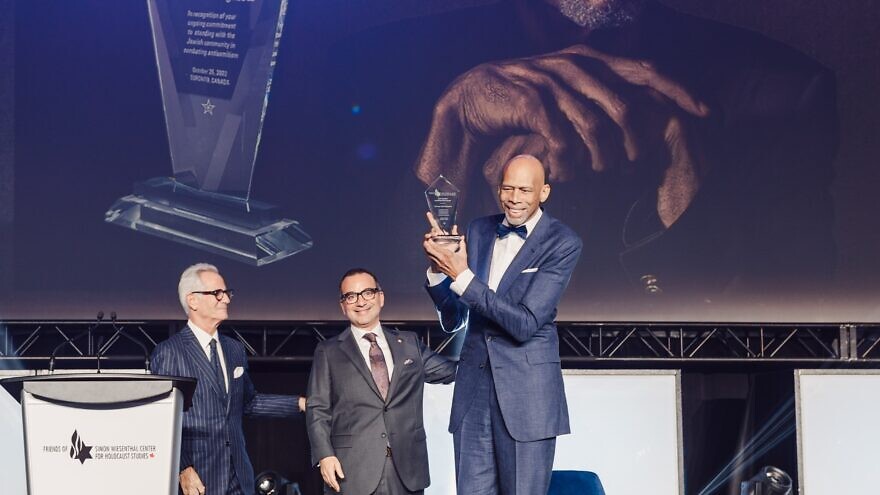 (October 31, 2022 / JNS) National Basketball Association legend Kareem Abdul-Jabbar received the first annual Ally Against Antisemitism Award from Friends of Simon Wiesenthal Center for what the organization described as “being a steadfast ally in the fight against antisemitism and building bridges between communities.”

Upon receiving the award on Oct. 25 at a fundraiser in Toronto, Abdul-Jabbar addressed the ongoing anti-Semitism scandal surrounding the rapper Ye by saying, “I get condemnation from people who don’t want to see any progress, and I get support from people who understand that what people like Kanye West have to say is intolerable. We can’t have our people who set standards and who everybody wants to emulate…talking like that. That’s not what we’re supposed to be about, especially in America where we say that all men are created equal.”

He continued, “Look what happened in the time it took for all the people who ended up condemning Kanye, look how long it took for them to get around to saying what they had to say. In the meantime, Jewish kids were intimidated and bullied and had to deal with a whole lot of violence or violent thoughts directed at them because someone like Kanye West says it’s okay. It’s not okay.”

Abdul-Jabbar’s award and vocal stance against anti-Semitism comes as another prominent figure in the NBA, Brooklyn Nets point guard Kyrie Irving, has come under fire for linking an anti-Semitic movie on his Twitter page. Irving has been criticized for his actions, including by the owner of the Nets, Joe Tsai, who tweeted, “I’m disappointed that Kyrie appears to support a film based on a book full of anti-Semitic disinformation. I want to sit down and make sure he understands this is hurtful to all of us, and as a man of faith, it is wrong to promote hate based on race, ethnicity or religion.”

Tsai also tweeted, “This is bigger than basketball.”