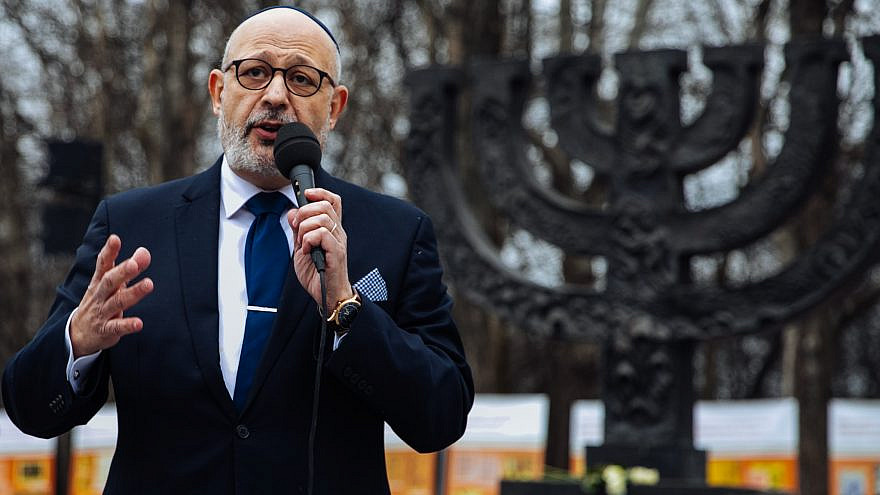 (January 27, 2021 / JNS) Representatives of the Jewish community in Kyiv, Ukraine—led by Rabbi Jonathan Benyamin, director of Chabad-Lubavitch of Kyiv—planted seven trees on Wednesday at the Babi Yar memorial in commemoration of the 6 million Jewish lives taken by the Nazis and their collaborators.

The ceremony, dedicated to International Holocaust Remembrance Day, was attended by Israeli Ambassador to Ukraine Joel Lyon; head of the department of culture, education and national minorities of the German Embassy in Ukraine Katarina Schaupp-Karmann; Israeli honorary consul to Ukraine Oleg Vishnyakov; vice chairman of the United States diplomatic mission Joseph Pennington;  chairman of the Israel-Ukraine parliamentary committee and people’s deputy Alexander Kunitskiy; U.N. program coordinator in Ukraine Osnat Lubrani; ambassadors of Lithuania, Poland, Morocco and Croatia; as well as other international diplomats and members of the Ukrainian parliament.

The ceremony was held in an abbreviated format due to coronavirus-related restrictions. The event was broadcast on the Facebook pages of the Kyiv Jewish community, the U.N. Mission to Ukraine and the European Union delegation.

“Jews all over the world are celebrating Tu B’Shevat,” said Markovitch. “On this day, we have a custom of planting trees that will shoot upward and will bear their fruit. Today, we are planting the trees in order to commemorate the Jews of Kyiv massacred at Babi Yar. These saplings will grow tall to memorialize the lives lost, yet we won’t be able to enjoy their fruits when they ripen.” 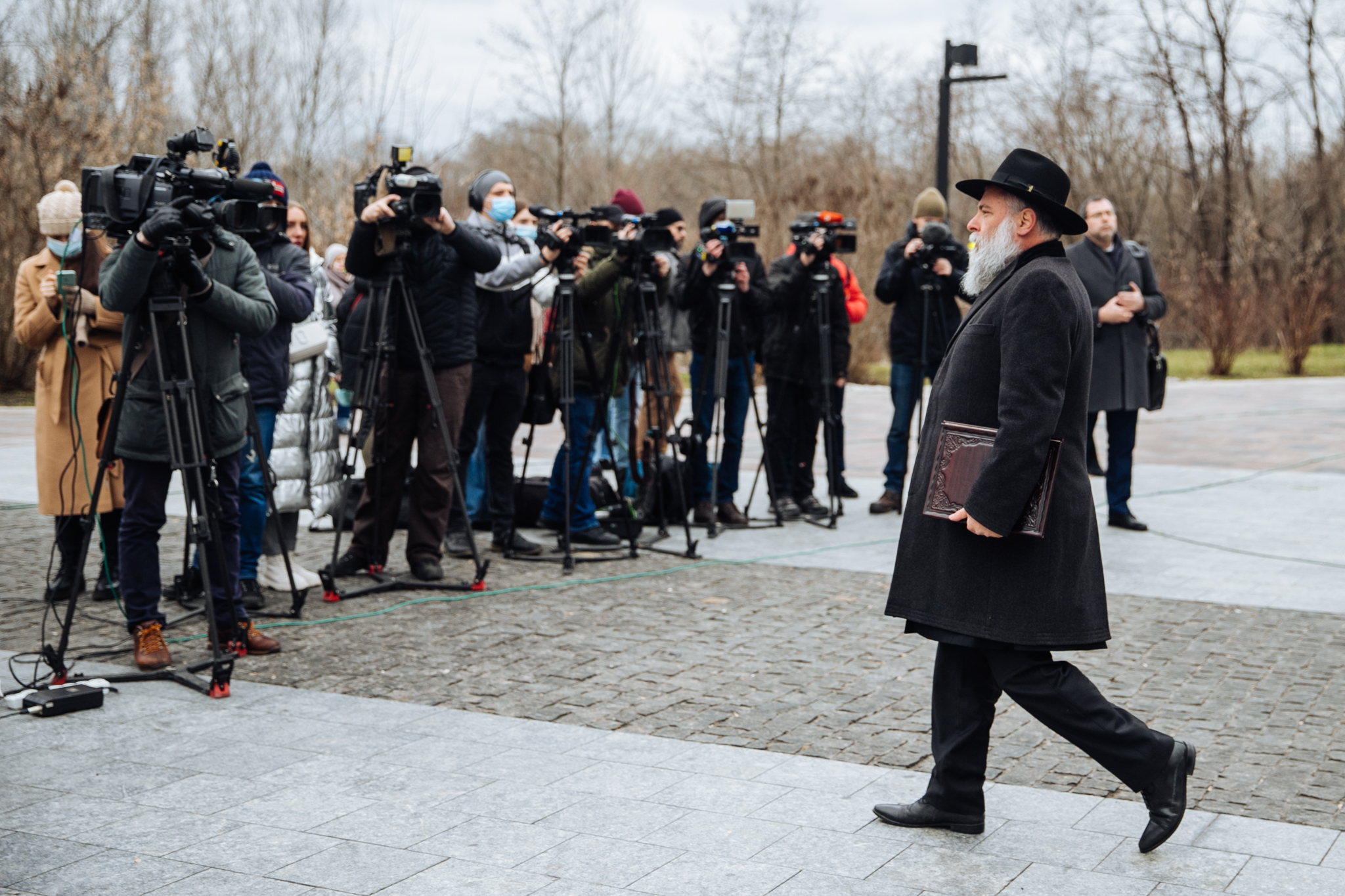 The rabbi continued, noting that “the Jewish community of Ukraine is growing and thriving, despite all the hardships and trials brought about by the coronavirus pandemic. This will continue for years to come, as we cherish the memory of our fellow Jews killed in this land.”

In September 1941, German troops captured the city of Kyiv. A few days later, the Nazis ordered that all Jews report to a designated located in the vicinity of a cemetery in Babi Yar. “Those who defy the orders will be killed,” read the flyers posted all over the city.

The next day, Jews who reported to the site were ordered to strip, after which they were all executed by fire over a ravine.

An astounding 33,771 of the Kyiv Jews were massacred over the span of two days between Sept. 29 and Sept. 30. Another 15,000 Jews were executed by the Nazis in the following days.

A total of more than 100,000 people were killed at Babi Yar over the course of two years, half of whom were Jews. 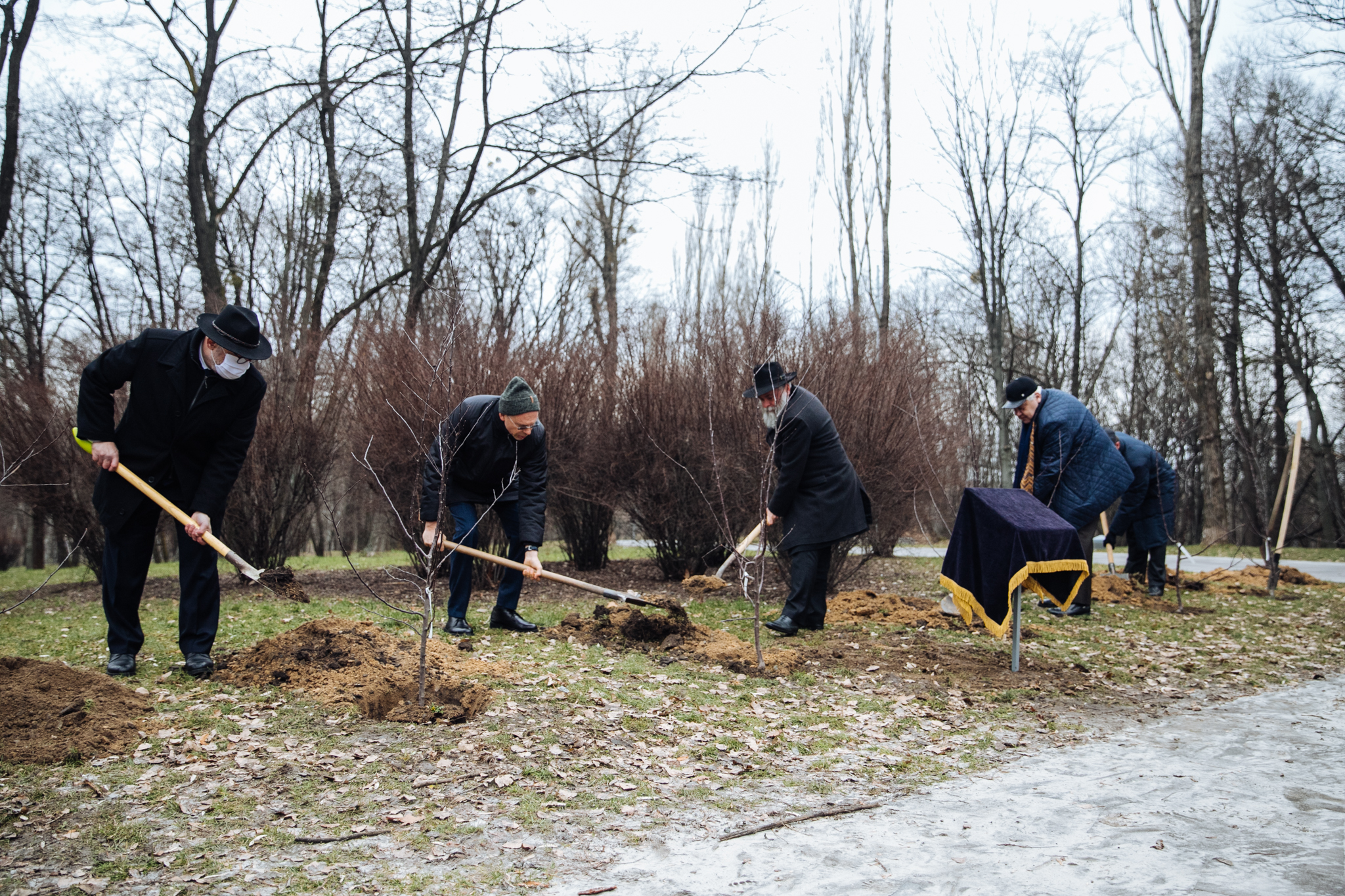 Planting trees at the Babi Yar memorial in Kyiv, Ukraine, for Tu B’Shevat and International Holocaust Remembrance Day, Jan. 27, 2021. Photo by Olga Zakrevskaya.
Republish this article in your newspaper or website