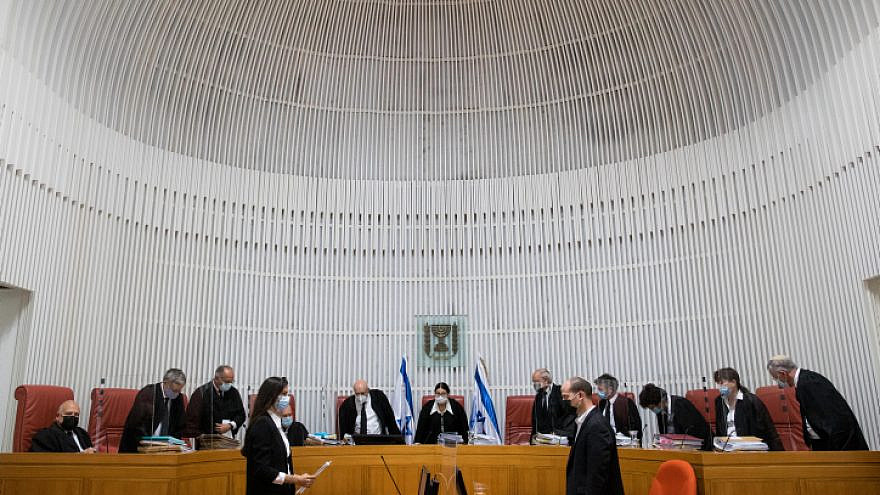 (March 2, 2021 / JNS) Israel’s Supreme Court handed down a bombshell decision on Monday recognizing Reform and Conservative conversions for those seeking to obtain citizenship. The result has caused an uproar in Israel and within the Jewish Diaspora, with some saying it crossed a red line while others affirming that it is a decision that is long overdue.

The decision touches on some hot-button issues in Israel, including tensions between Orthodox and secular communities, which have reached a fever pitch during the pandemic, as well as the role of the Supreme Court and calls on the Israeli right to reign on its powers. More so, coming just weeks before Israelis head to the polls, adds yet another contentious issue into the political arena.

Indeed, politicians on the religious right quickly condemned the decision by the court and vowed to introduce legislation to overturn the decision.

Aryeh Deri, head of the Sephardi ultra-Orthodox party Shas, lambasted the ruling as “a fatal blow to Israel’s Jewish character and a complete destruction of the status quo in matter of religion and state that have existed for more than 70 years.”

Likud condemned the ruling, saying that “the High Court made a decision that endangers the Law of Return, which is a cornerstone of Israel as a Jewish and democratic state. Only a vote for Likud will ensure a stable right-wing government that will return sovereignty to the people and the Knesset.”

However, on the other side, secular parties, including those in the center, left and even right, praised the decision.

“Israel must have complete equality of rights for all streams of Judaism—Orthodox, Reform, Conservative,” Opposition leader Yair Lapid said. “We all need to live here together with tolerance and mutual respect.”

Similarly, Avigdor Lieberman of Yisrael Beitenu, a right-wing nationalist party, hailed it as a “historic” decision and promised that his party will “continue to battle religious coercion and to preserve the State of Israel’s characters as Jewish, Zionist and liberal state.”

‘The decision is almost negligible’

Previously, Israel recognized Reform and Conservative conversions as part of the citizenship process and only if they were performed overseas. Now, this decision allows such conversions even if performed in Israel.

Israel’s highest court claims that it was compelled to make this decision, rather than the Knesset, since the issue had been debated for years with a pronouncement never forthcoming.

A 2005 petition put before the court demanded citizenship for several non-Israeli nationals who converted in Israel and wished to claim citizenship under Israel’s “Law of Return.” The Knesset could not arrive at a conclusion due to disagreements between ultra-Orthodox and non-ultra-Orthodox lawmakers.

Nevertheless, while the political and social ramifications of the decision are significant, the Reform and Conservative movements in Israel, unlike in the Diaspora, are relatively small.

Yedidia Stern, president and CEO of the Jewish People Policy Institute (JPPI) and member of the Faculty of Law at Israel’s Bar-Ilan University, told JNS that “from a practical point of view, this decision is almost negligible because we are talking about 30 to 40 people a year. It’s not a big deal.”

The Union for Reform Judaism welcomed the decision, saying it “reflects the diversity and vibrancy of Jewish life in Israel and around the world.”

“We hope this ruling establishes a precedent that will lead to further recognition of the Reform and Conservative movements in Israel,” it said in a statement on its website.

Similarly, Masorti Movement head Rakefet Ginsberg praised the court’s decision, describing it as “just, understandable and clear. There is more than one way to be a Jew in Israel.”

Yet there are concerns that the decision could lead to an increase in non-Jews seeking conversion to Judaism as a means to gain citizenship in Israel.

‘Seriously undermines the integrity of Israel’

The decision has caused a furor among Israel’s haredim, who maintain that only their representatives in the religious courts who abide by their stringent approach to Judaism should be allowed to perform conversions.

Israel’s Ashkenazi Chief Rabbi David Lau said that those who converted to Judaism in a Reform conversion and the like “are not Jews. No High Court decision of any kind will change this fact. It is unfortunate that the court in its decision approves the flooding of the State of Israel with immigrants who have nothing to do with Judaism.”

It remains unclear what he meant by that, as Israel’s 9 million citizens are widely diverse and many are not Jewish.

“What the Reform and Conservative call ‘conversion’ is nothing but a falsification of Judaism,” he said, warning that this decision could lead to thousands of non-Jews considering themselves Jews when according to Jewish law, they would not be.

For Haredi Jews in Israel, the decision is problematic since they believe that converts and their descendants would not be considered Jewish; as such, it could cause future problems if they want to marry a Jewish person who, according to halachah (Jewish law), can only marry another Jew.

Stern, who said that the decision was a “necessary and obvious ruling for Israel as well as for the Jewish people,” also told JNS that “the important thing is the Supreme Court made a decision symbolically recognizing the authority of non-Orthodox rabbis to decide who is a Jew for the purpose of the law of return. Symbolically, it is important. Practically, it is not a big deal.”

“As the nation-state of the Jewish people,” continued Stern, “anyone who is willing to become a Jew and convert by any recognized stream—Reform, Conservative or Orthodox—must be allowed to gain citizenship.”

“The Supreme Court has already accepted conversion by private Orthodox courts,” he noted. “Once the state accepted the legitimacy of one private court, it must accept the rulings of the private courts of other streams. If Israel, as a liberal state, takes equality as a value seriously, it must give equal weight to different streams of Judaism.”

Rabbi David Stav, co-founder and the chairman of the Tzohar Rabbinical Organization, seemed to agree with Stern, telling JNS the decision “is not dramatic,” and only applies to those who are already married and living in Israel.

“We are talking about maybe 30 to 40 people [per year],” he said. “Nothing much is going to change as a consequence of the decision.”

“What will change is the direction,” he said. “The Supreme Court is telling the state it has lost patience and is not waiting for it to make a decision.”

The court has signaled that because lawmakers have failed to act for 15 years on a law regarding non-Orthodox conversions.

The problem, according to Stav, is that the haredi parties “want the authority for conversion given to very few people who belong to [their] fold and do not accept any diversity among the rabbis carrying out conversions.”

Tzohar blamed the haredim for their refusal to relinquish their monopoly on conversions, saying “we will have no one else to blame but those who were opposed to dialogue for allowing this to occur.”

“Those very power-brokers who seek control over Israeli conversions completely based on their limited worldviews without any desire for dialogue are the ones completely responsible for this decision,” the rabbinical organization said in a statement, adding “this process must be open to accepting the wider approaches to conversion that are wholly possible within the norms of” Jewish law.

Stav suggested opening conversion to different types of rabbis with local city rabbis and rabbinical councils being given the ability to carry out conversions.

He also noted that this would alleviate a bigger problem in Israel.

“Instead of talking about these 40 people,” said Stav, “we should talk about the 400,000 Russian immigrants who are still waiting for their conversion since most do not want to convert under the current situation.”