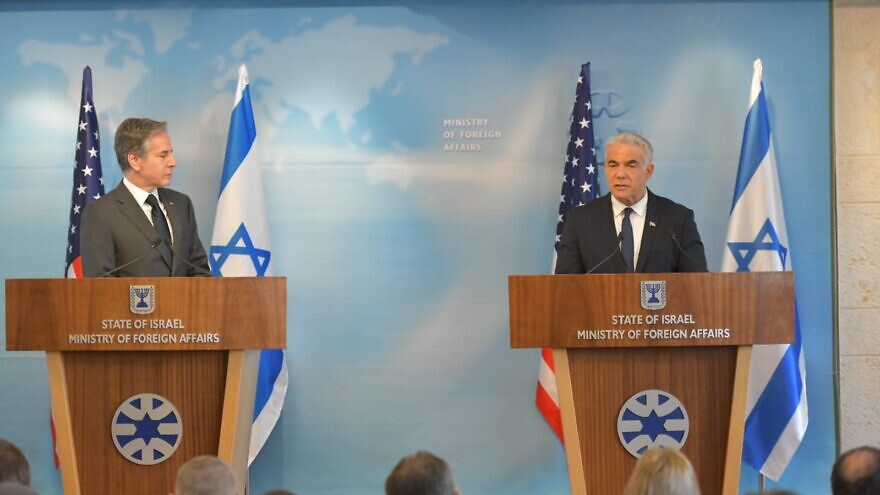 (March 27, 2022 / JNS) Israeli Foreign Minister Yair Lapid and U.S. Secretary of State Antony Blinken held a joint press conference on Sunday in Jerusalem, during which they discussed the Russian invasion of Ukraine and a possible nuclear deal with Iran.

“When it comes to the most important element,” said Blinken, “we [the U.S. and Israel] see eye to eye. We are both committed, both determined that Iran will never acquire a nuclear weapon.”

The United States believes that “a return to full implementation of the Joint Comprehensive Plan of Action is the best way to put Iran’s nuclear program back in the box that it was in,” he said, and reaffirmed that “our commitment to the core principle of Iran never acquiring a nuclear weapon is unwavering.”

Lapid said that Israel and the United States “have disagreements” with regard to Iran, but noted that “open and honest dialogue is part of the strength of our friendship.”

Iran, he emphasized, was not just an Israeli problem.

Israel and the United States “will continue to work together to prevent a nuclear Iran,” he said, adding that Israel “will do anything” it considers necessary to stop Iran’s nuclear program.

“From our point of view, the Iranian threat is not theoretical. The Iranians want to destroy Israel. They will not succeed. We will not let them,” he said.

Lapid also thanked the administration and both parties in Congress “for their support for the Iron Dome missile defense system and for the approval of security assistance for Israel.”

In answer to a question from a reporter about why Israel might be “standing in the way” of the U.S. desire to reopen the American consulate for Palestinian affairs in Jerusalem, Lapid replied, “We have no problem, of course, and it’s not even our place to say anything if the United States wants to open an office to deal with the day-to-day or cultural problems of Palestinians. We just don’t think Jerusalem is the right place for this because Jerusalem is the capital of Israel, and Israel alone.”

The Biden administration has been pushing for the reopening of the U.S. consulate for Palestinian affairs on Agron Street, which was closed and merged with the U.S. embassy in 2018 by the Trump administration.

Last May, Blinken reaffirmed America’s commitment to reopen the consulate during a meeting with Palestinian Authority leader Mahmoud Abbas in Ramallah.

Sunday’s press conference took place ahead of a historic summit to be held on Sunday evening in the Negev, with the foreign ministers of the United Arab Emirates, Morocco and Bahrain. The summit will deal mainly with the Iranian threat to the region as well as how to further advance the success of the Abraham Accords, a series of agreements normalizing diplomatic relations between Israel, the UAE, Bahrain, Sudan and Morocco, facilitated by the Trump administration between August and December 2020.