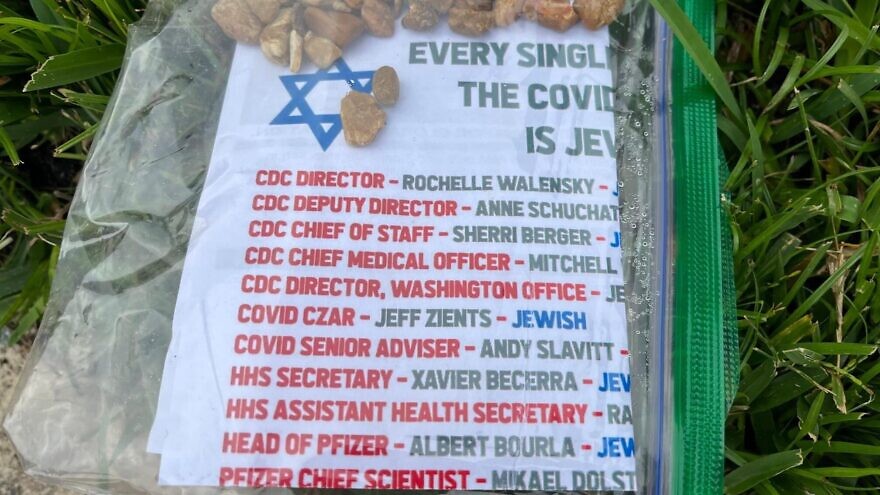 (February 22, 2022 / JNS) Students at the University of Illinois Urbana-Champaign are the latest to report finding anti-Semitic fliers seeking to tie the Jewish community to the coronavirus pandemic. The papers were found around campus on Sunday.

“This weekend has brought multiple reports of anti-Semitic and hateful fliers being dropped in different locations on and around campus inside plastic bags filled with small rocks. These messages are offensive, outrageous and they represent unacceptable attacks on members of our Jewish community,” the university’s chancellor, Robert Jones, wrote in a statement to students, faculty and staff.

He went on to say the fliers are “antithetical to our university values of inclusion and tolerance, and they are another disheartening example of the kind of anti-Semitic acts and expressions that are too common in our nation and right here in the community where we all live, learn and work. Sneaking around and delivering hateful, hurtful and racist messages in little plastic sandwich bags filled with gravel is a cowardly and craven way to spew hate and division in our community.”

Rabbi Dovid Teichtel, director of Chabad Illini, Chabad Jewish Center for Jewish Life at the university, said in a letter to his community that was posted on Facebook: “I prefer to only discuss positive subjects, and it’s with deep sadness that I write this post, but over the past 24 hours, tens of students have reached out to Illini Chabad for support and asked us to speak out, and I cannot ignore that request.”

He continued, saying “fliers were strewn around … campus with hateful conspiracies blaming the Jewish community for COVID. This shallow and foolish theory is a product of the dark ages when such accusations were used to blame the Jewish community for the plague. We regret that such backward ideas have not been left on the ash-heap of history. … Such actions and displays of hate are not a reflection of our university or our campus culture.

“The Illini community is one of love, support and mutual respect for one another,” he wrote.

Also responding to the fliers was the Illini Hillel at Cohen Center for Jewish Life, which wrote on Facebook: “The fliers played on both centuries-old anti-Semitic tropes about Jewish power as well as modern manifestations of anti-Semitism in the form of conflation between Jewish and Israeli identity. It is outrageous to use the pandemic to spread the virus of hate.”

“This latest attack only amplifies the need for increased awareness, education and strong condemnation of antisemitism in all its forms,” they continued.

Fliers blaming Jews for the coronavirus have been left in front of homes in Texas, Florida, California, Colorado and elsewhere in recent months. Most recently, they were found in Colleyville, Texas, just weeks after a gunman held a rabbi and three congregants hostage there for nearly 11 hours on Jan. 15.

Noting that the university’s student government will this week consider “bringing the anti-Semitic BDS movement” to the school, Tiechtel asked students to step up and oppose the measure against Israel.

He also urged Jewish students to follow the path of the Lubavitcher Rebbe—Rabbi Menachem Mendel Schneerson—by doing something Jewishly to counteract the hate and spread goodness in the world.

“When we are faced with opposition and anti-Jewish sentiment, we cannot back down. It is a time to add in Jewish pride and to live more Jewishly,” said the rabbi. “Show your Jewish pride and protect your home by adding a mezuzah to your door, putting on tefillin, lighting Shabbat candles and doing an extra mitzvah.”