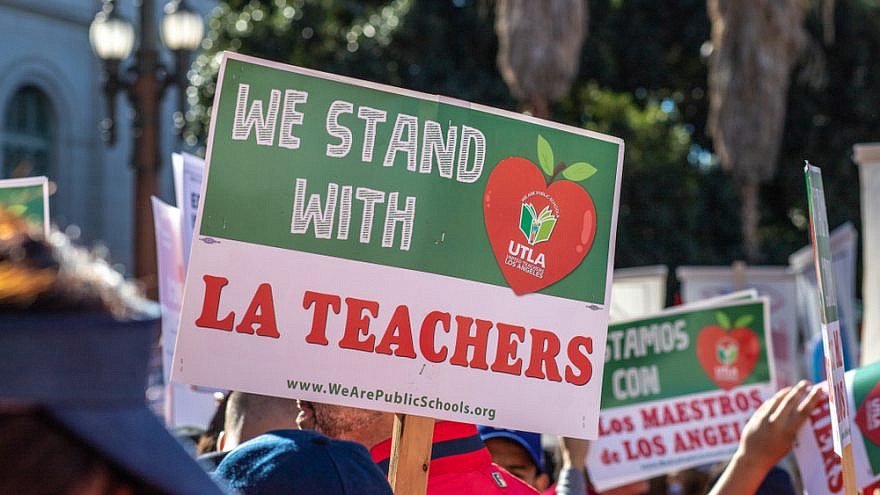 (June 9, 2021 / JNS) The leadership of the United Teachers Los Angeles (UTLA) is scheduled to vote in September on a proposed resolution that urges the U.S. government to end aid to Israel and endorses the BDS movement “against apartheid in Israel,” reported The Los Angeles Times.

“As public-school educators in the United States, we have a special responsibility to stand in solidarity with the Palestinian people because of the $3.8 billion annually that the U.S. government gives to Israel, thus directly using our tax dollars to fund apartheid and war crimes,” the resolution said.

Three UTLA chapters have already voted in favor of the anti-Israel movement and the United Educators of San Francisco (UESF) passed a similar resolution in May, becoming the first public-school teachers union to support the BDS movement. The UESF resolution accused Israel of “apartheid and war crimes,” according to The Los Angeles Times.

UTLA is the second-largest teachers union in the nation.

The union addressed concerns about the proposed resolution in a statement on its website on June 1, which said in part: “Debate and disagreement are essential to democracy and to our union, even when there are deep, conflicting emotions on both sides. As educators, it is our job to create nurturing, safe environments for all of our students. UTLA stands against racism, sexism, anti-Semitism, xenophobia, homophobia, Islamophobia and oppression in all forms.”

In a Twitter post on Sunday, former Israeli ambassador to the United States Michael Oren said the Los Angeles and San Francisco teachers unions voting to boycott Israel while condemning anti-Semitism is like “pledging to fight racism while joining the [Ku Klux] Klan.”