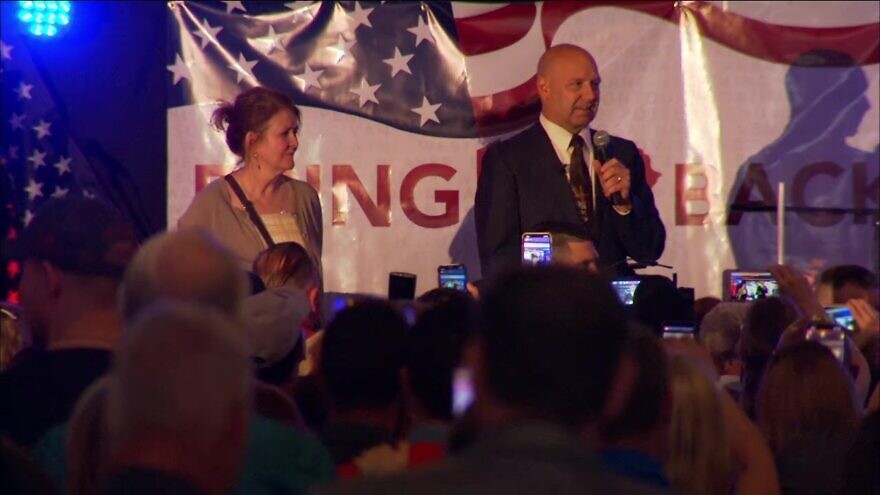 (July 29, 2022 / JNS) The GOP nominee in Pennsylvania’s gubernatorial race is distancing himself from the anti-Jewish statements of one of his prominent supporters.

In recent weeks, State Sen. Doug Mastriano has been under fire from both Democrats and Republicans after it was revealed that his campaign paid $5,000 in advertising consulting to the far-right microblogging platform Gab, which is known as a haven for anti-Semitic content. His Democratic opponent, Pennsylvania Attorney General Josh Shapiro, is Jewish.

Gab’s CEO Andrew Torba, who is an outspoken supporter of Mastriano, responded to the controversy with an anti-Semitic rant during a livestream, where he defended his donation and called for an exclusively Christian movement.

Earlier in the livestream, Torba said that he and Mastriano only speak to Christian media.

As the controversy grew and groups like the Republican Jewish Coalition called on Mastriano to distance himself from Gab and Torba, Mastriano released a statement on Twitter.

“Andrew Torba doesn’t speak for me or any campaign. I reject anti-Semitism in any form. Recent smears by the Democrats and the media are blatant attempts to distract Pennsylvanians from suffering inflicted by Democrat policies,” he wrote. “While extremist speech is an unfortunate but inevitable cost of living in a free society, extremist policies are not—and the only candidate in this election who wants to impose extreme policies on Pennsylvania—inflation, crime, lockdowns and mandates—is Josh Shapiro.”

A recent poll of registered voters in Pennsylvania conducted between July 22 to 26 by Fox News shows Mastriano trailing Shapiro by 10%.