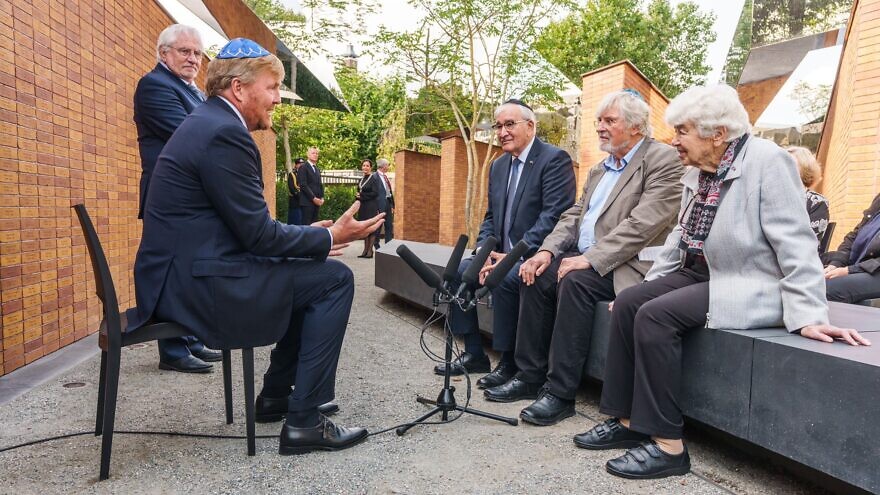 (September 20, 2021 / JNS) A new memorial in Amsterdam’s Jewish Cultural Quarter pays tribute to the more than 102,000 Dutch victims of the Holocaust, the Associated Press reported.

The National Holocaust Memorial of Names, which was unveiled on Sunday, is comprised of stainless-steel panels and a series of brick walls placed at different angles that together form four Hebrew letters, which spell out a word that means “In Memory of.” Each brick is inscribed with the name, date of birth and age at the time of death of a Dutch citizen who was murdered in Nazi concentration camps during World War II or died while being transported to the camps.

The memorial, designed by Polish-Jewish architect Daniel Libeskind, is located near a former concert hall where Nazis detained Jews before sending them to concentration camps.

Jacques Grishaver, chairman of the Dutch Auschwitz Committee, officially unveiled the memorial with King Willem-Alexander of the Netherlands in a ceremony attended by Holocaust survivors and others.

Dutch Prime Minister Mark Rutte noted that the memorial will remind citizens to “be vigilant” against anti-Semitism and should prompt people to question whether the Netherlands did enough to protect Jews during and after World War II. He talked about “the cold reception for the small group who returned from hell after the war” and called that time “a black page in the history of our country.”

The monument was commissioned by the Dutch Auschwitz Committee but funded in part by the public, with 84,000 people paying $58 each to dedicate one of the bricks.