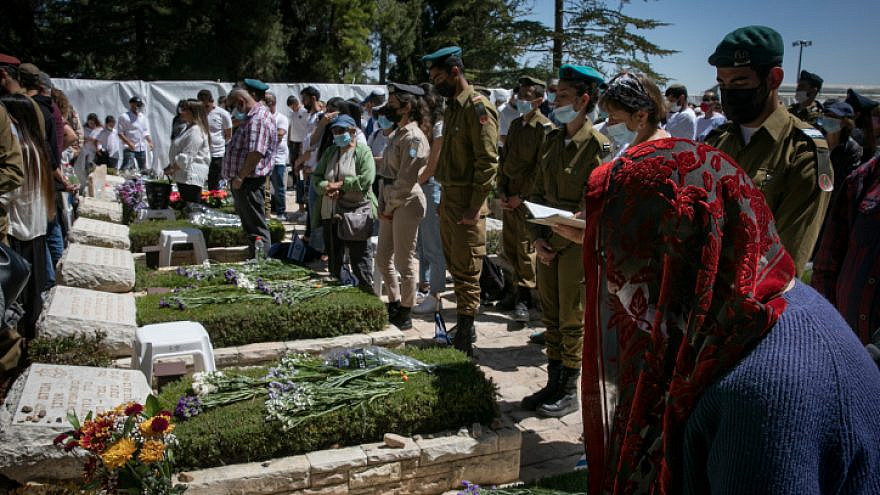 During the siren, fighter jets flew a special aerial salute over the national military cemetery at Mount Herzl in Jerusalem, beginning the official state Memorial Day ceremony to commemorate the 27,086 soldiers and civilians who have died in wars and terrorist attacks since 1860.

“We mustn’t remain indifferent to the threats of annihilation from those who wish us harm,” Prime Minister Benjamin Netanyahu said at the ceremony, amid the current tensions with Iran. “The defenders of the present tell the defenders of the past: ‘Masada will not fall again.'”

Memorial Day was ushered in at 8 p.m. on Tuesday, as a one-minute siren sounded throughout the country, bringing it to a standstill.

The siren was immediately followed by the state ceremony at the Western Wall in Jerusalem.

Wednesday’s siren was being followed by the state Memorial Day service at Mount Herzl, as well as smaller events in Israel’s 52 military cemeteries and at memorial sites across the country.

The ceremony honoring victims of terrorist attacks will be held in Jerusalem at 1 p.m.

According to the Defense Ministry, since last Memorial Day, 112 new names were added to the somber list of those who died defending the country.

Of them, 43 were soldiers, police officers and civilians, and 69 were disabled veterans who passed away due to complications of injuries sustained during their military service.

The Defense Ministry’s figures include all security forces members who died during their service over the past year, including as a result of accidents, suicide, or illness.

Memorial Day will come to a close with a ceremony slated to take place on Mount Herzl at 8 p.m. on Wednesday, ushering in Israel’s 73rd Independence Day.
Republish this article in your newspaper or website