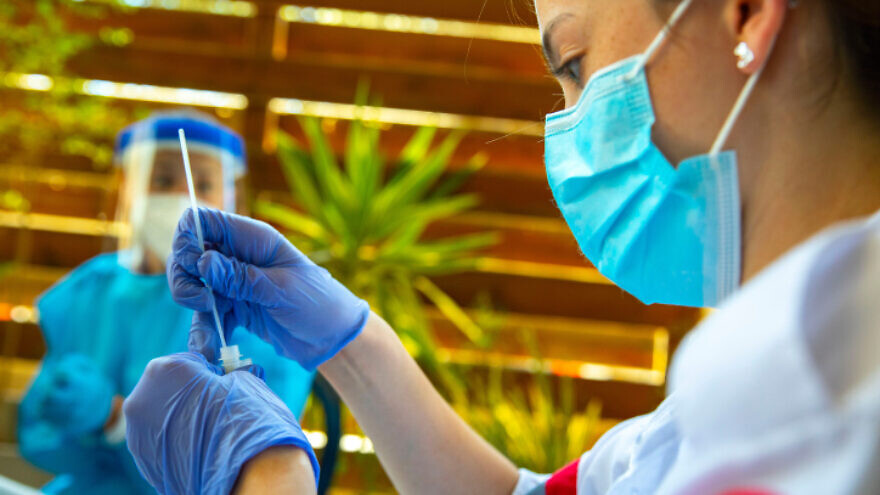 Col. Ariel Blitz, head of the Dan District in the Home Front Command, said the “massive” operation will begin on Aug. 22.

“Thousands of reserve soldiers are being drafted as we speak under the leadership of the Home Front Command. They will support the Ministries of Health, Education and local authorities,” said Blitz. “The main concept is to test kids not yet vaccinated and who can’t be vaccinated aged between 3 and 12,” he added.

According to the program, children who receive positive results, indicating past coronavirus infection, will be exempt from the need to go into isolation if exposed to classmates. The children with positive results will also be eligible for a “green passport,” enabling entry into an array of venues and activities like vaccinated and recovered adults.

“With serological tests, we will be able to know if kids were sick before, even if they didn’t feel any issue,” said Blitz. “By doing that, we can provide them with the ability to continue with school, and not leaving class if one of the kids is ill. That will give us the ability to open the education system on Sept. 1. We are doing our best, in the middle of the fourth wave, to be able to open the education system as planned.”

The serological testing program began with a pilot in ultra-Orthodox cities, including Bnei Brak, said Blitz. That testing has found that around 16 percent of children had coronavirus antibodies in their blood.

The serological testing program will begin now and last until Sept. 2, the officer said. It could continue after that, “depending on results and needs,” he added.

‘Doing things we never dreamt that we’d do’


Established in 1992 following the First Gulf War, after tens of Iraqi Scud missiles were launched by the Saddam Hussein regime at Israeli cities, the IDF Home Front Command is the product of a realization that “we needed to be better prepared for the civil arena,” said Blitz.

Blitz defined its central task as supporting local municipalities during emergencies ranging from war, earthquakes, and now, pandemics. The Home Front Command began supporting disease-control efforts in March 2020 and found itself “doing things we never dreamt that we’d do,” he said.

Additional programs that the command is currently running are supporting efforts by local authorities to care for elderly people who cannot leave their homes, and assisting hospitals.

“Today, military units are returning to hospitals. There are many jobs that can be done in hospitals where you don’t need to be a doctor,” he said.

This includes moving patients within the hospitals, freeing up nurses to remain at bedsides, transferring equipment, logistical supply transfers and helping with storage tasks. Units assisting hospitals know them well as they have trained there in those specific medical centers in the past.

“We have drafted them many times in the past 18 months. Today, we draft them again,” said Blitz, referring to hundreds of personnel being called up to assist hospitals.

The personnel will also assist in the ongoing vaccination drive, including both the booster jabs and the provision of jabs to younger vaccine-hesitant people, said Blitz. “You win a pandemic with vaccines. The other efforts are supporting efforts,” he said.

As part of that effort, the Home Front Command is recruiting medics to speak with elderly immigrant people in their native tongues, such as Russian and Amharic.

“By having that capability, we are able to support. We don’t come to replace anyone or take control. We don’t know how to be a good mayor, hospital manager or doctor. But we know how to support them and assist because we work together during routine times, and we train together, building confidence and putting ego aside.”