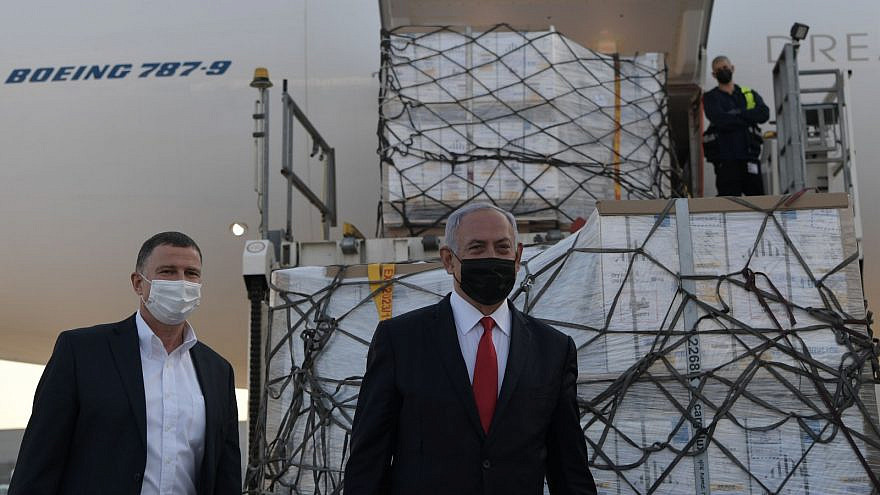 (January 11, 2021 / JNS) Israeli Prime Minister Benjamin Netanyahu and Health Minister Yuli Edelstein were on hand at Ben-Gurion International Airport on Sunday for the arrival of another shipment of Pfizer’s BioNTech COVID-19 vaccine.

The Israeli premier called the shipment’s arrival “a great day for the State of Israel,” and said that with the help of Pfizer CEO Albert Bourla, inoculation of the country’s over-16 population would be completed by March.

Netanyahu announced “Operation Back to Life” last week—an agreement between Israel and Pfizer whereby in exchange for the pharma giant’s bringing forward the arrival of its vaccines and increasing the amount provided, Israel will share with it statistical data relating to its vaccination program. The next shipment of Pfizer vaccines had been scheduled for February, leading to fears that vaccinations would have to be put on hold three weeks into Israel’s record-breaking vaccination drive.

“Today, more than 72 percent of our people over 60 have been vaccinated. … Next Sunday, an additional shipment will arrive, and we will start vaccinating the next group; people aged 50-60 and up, and thus we will proceed,” he said.

Netanyahu said that he and Edelstein had agreed to up the pace of vaccinations to 170,000 a day.

Edelstein vowed that by the end of March, five million Israelis will have been vaccinated, most with both required doses of the Pfizer vaccine.

“Yesterday, we began distributing the second dose … so far we have vaccinated 1,817,000 with the first dose,” he said.

“Get vaccinated and follow the lockdown regulations,” he added.

Israel entered its third national COVID-19 lockdown on Dec. 27, but tightened restrictions on Jan. 8 as morbidity continued to rise. The Israeli Health Ministry has confirmed the presence of both the U.K. and South African variants of the COVID-19 virus in the country.

While, according to Pfizer, initial vaccine testing against the U.K. strain has so far been effective, with promising results also emerging from the South African variant, the Israeli Military Intelligence unit tracking the pandemic has reported that preliminary studies show the South African mutation to be resistant to antibodies and capable of infecting recovered COVID-19 patients.

The report stressed that “further research is needed to determine the mutation’s resistance to the vaccine.”