(April 20, 2022 / JNS) The pending Iran nuclear deal, and any decision to delist the Islamic Revolutionary Guard Corps (IRGC) from America’s list of Foreign Terrorism Organizations (FTOs), could put the United States at risk, according to former Israeli Ambassador to the United States Ron Dermer.

Speaking on this week’s episode of “Diplomatically Incorrect,” Dermer said that Iran’s ballistic-missile program targets the United States, not Israel, and that the IRGC may be active in the United States right now.

“They’re trying to assassinate former [U.S.] officials,” said Dermer, noting how in the past Iranian operatives had tried to bomb a Washington cafe and murder the Saudi ambassador to America. There have also been attempts to attack the Israeli and Saudi embassies.

Since President Joe Biden took office, he has been set on America re-signing the 2015 Joint Comprehensive Plan of Action (JCPOA), otherwise known as the Iran nuclear deal. Then-President Donald Trump withdrew from the deal in 2018. As talks continue in Vienna around a possible return to the agreement, Dermer believes nothing will stop Biden from signing a deal. Rather, he said, it is Iranian hesitation that is at play.

“Iran is the only one that’s going to stop this from moving forward,” Dermer contended.

He again highlighted the “fatal flaws” of the current plan, including that under it the majority of so-called sunset clauses will be automatically activated within the next three to eight years, “which essentially means that Iran doesn’t need to sneak in or break into the nuclear club, it can just walk into the nuclear club, by building an industrial-size nuclear-enrichment program, with international legitimacy, and the breakout time effectively goes down to zero.”

Then, he continued, “At a time of their choosing, they can just decide to explode a nuclear device, which will be very dangerous for the region and for the whole world.”

Moreover, lifting sanctions will fuel Iran’s war machine in the region. Hundreds of billions of dollars will become available to invest in their missile programs and other terror efforts.

“In 2015, no one knew what was going to happen after the deal—but we saw exactly what happened. And I think it’s one of the reasons why the current administration is not making the bombastic claims that were made in 2015” by former President Barack Obama, explained Dermer. “There’s no question anymore. The archive that Israel stole exposed how much Iran has lied to the world.” 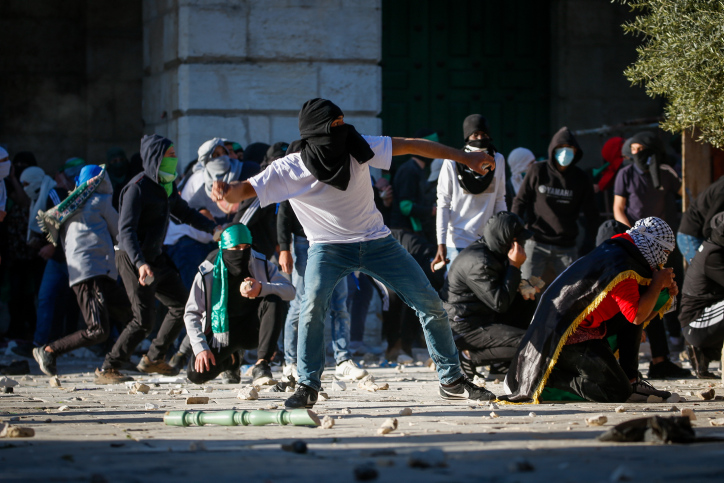 Palestinian and Arab-Israeli rioters hurl rocks at Israeli security forces during Ramadan prayers at the Al-Aqsa mosque on the Temple Mount in the Old City of Jerusalem, April 15, 2022. Photo by Jamal Awad/Flash90.

Dermer and Makovsky also discussed the recent escalation on the Temple Mount, including the incendiary comments made this week by Jordanian Prime Minister Bisher al-Khasawneh.

“I salute every Palestinian, and all the employees of the Jordanian Islamic Waqf, who proudly stand like minarets, hurling their stones in a volley of clay at the Zionist sympathizers defiling the Al-Aqsa Mosque under the protection of the Israeli occupation government,” said Khasawneh.

Dermer said that the international community’s failure to reprimand Khasawneh over the statement will only lead to further escalation.

“The problem is going to get worse,” said Dermer. “He’s got to understand that a line has been crossed here. … What the international community prefers to do is just kind of bury its head in the sand, to use the argument of Palestinian weakness—in this case, it’ll be Jordanian weakness—to never actually take a stand against it. And it’s a mistake because it will only further inflame the situation. And it will lead to a chronic situation where we never get out of it.”

He said that if Jordan’s reputation in Washington was hurt by Khasawneh’s statements then the king of Jordan would be more likely to clamp down on the incitement, because “the king’s strength actually comes from the support he receives internationally.

“You are not helping him by not pushing back,” said Dermer.