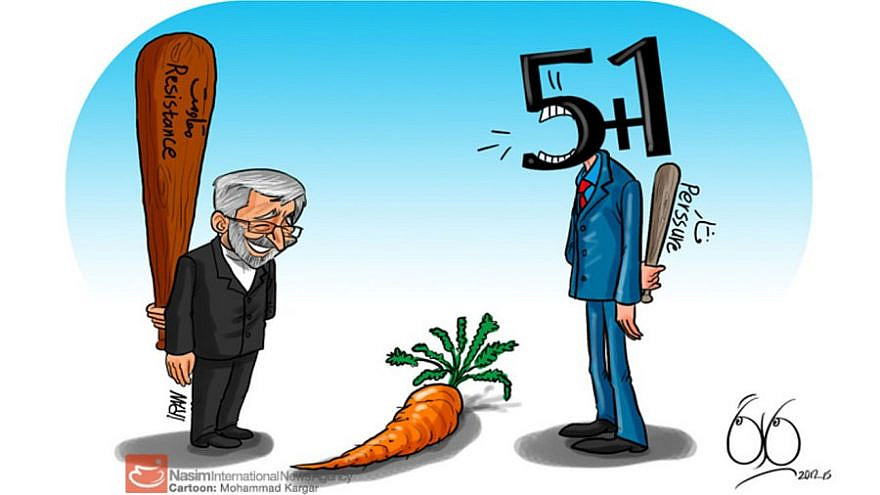 (April 7, 2021 / JNS) Ahead of the opening of indirect negotiations between Iran and the United States in Vienna through intermediaries, Iran presented a tough and uncompromising stance calling for the lifting of all sanctions if the United States wants to return to the nuclear deal. The agreement that paved the way for a return to indirect talks was made possible after the European Union initiated a virtual preparatory meeting on April 2 of representatives from Britain, China, France, Germany, Russia and Iran—the Joint Commission of the Joint Comprehensive Plan of Action (JCPOA).

The meeting was chaired by Josep Burrell, the E.U. Secretary of State for Foreign and Security Affairs. On the eve of the talks, Iranian Foreign Minister Javid Zarif urged the nuclear agreement partners to “play a constructive role” during the meeting on the terms of reinstating the United States to the agreement’s framework. Zarif spoke by phone with his British counterpart Dominic Raab on the issue and stressed the need to lift “all American sanctions.”

U.S. President Joe Biden, who promised during his election campaign to return to the nuclear deal, is struggling to find the formula that would allow such a return—even a gradual one—due to Iran’s hardline positions and severe violations of the deal. Among other things, Iran has increased its enriched uranium stockpile, increased the level of uranium enrichment at its Fordow facility to 20 percent, reduced cooperation with the International Atomic Energy Agency (IAEA) and even installed advanced centrifuges at the site, while continuing nuclear-related research and development. At the same time, according to a recent IAEA report, Iran continues its uranium enrichment efforts at the underground facility in Natanz, using advanced IR-2m centrifuges. All this is designed to increase the pressure on the United States.

On April 5, State Department spokesperson Ned Price confirmed that the American delegation to the talks in Vienna would be headed by Robert Malley and would focus on ways to restore Iran to effective compliance and oversight of its nuclear program, as well as easing sanctions on it. According to Price, “We don’t anticipate an early or immediate breakthrough, as these discussions we fully expect will be difficult. But we do believe that these discussions with our partners and, in turn, our partners with Iran, is a healthy step forward.” Price continued, “Our goal at these talks in Vienna is to set the stage for that mutual return to compliance. The original formulation is one that still holds today. It’s the limited lifting of sanctions, nuclear sanctions, in return for permanent and verifiable limits on Iran’s nuclear program.” He added that they would focus on the nuclear measures that Iran must take in order to reach the end state of compliance “and easing U.S. sanctions to achieve this compliance in accordance with the nuclear agreement.”

Meanwhile, Iranian Foreign Ministry Spokesman Saeed Khatibzadeh repeated on April 5, on the eve of the talks, the tough Iranian message that the objective of the discussions in Vienna was to remove “all the cruel American sanctions. … If we can reach an agreement on the comprehensive lifting of sanctions with the P4+1, and they can guarantee U.S. commitments, the path will be opened.”

The spokesman added that as far as Iran is concerned, “The path is clear. All U.S. sanctions must be removed at once.” Once Iran verifies the sanction removal measures, he continued, “Iran is ready to suspend its retaliatory measures.”

Khatibzadeh lowered expectations for the Vienna conference, saying that it was no different from previous meetings of the Joint Commission and called it a “periodic” meeting between Iran and the other partners in the agreement. He said that the Iranian delegation would be headed by Abbas Araghchi, deputy director of the Iranian delegation for political affairs and that it would not negotiate directly with the American side. “We will not hold direct talks with the United States until it returns to its obligations under Security Council Resolution 2231, and how the United States will conclude with the P4+1 is not our issue; our issue is the Joint Commission. … The path that the United States must take and the comprehensive sanctions it must lift are provided to the P4+1. The Iranian Foreign Ministry has already worked with various organizations to detail them.”

Khatibzadeh added that for this reason, the talks in Vienna would be of a “technical and legal nature. … All U.S. sanctions will be mentioned. … All of them should be removed, and Iran will conduct technical talks with the P4+1 to ensure that they have indeed been lifted.”

He added, “Of course, Iran did not wait for the lifting of sanctions to regain its place in the oil market and continued oil exports.”

On April 6, Ali Rabiei, spokesman for the Iranian government, spoke in a more optimistic spirit.

“Iran’s position is clear. We will not conduct any negotiations with the United States, but we will deliver the message. In exchange for the lifting of all sanctions and the implementation of Resolution 2231, Iran is ready to return to all its obligations in the shortest possible time after the other side fulfills all its commitments and it is verified,” he said.

Rabiei called the Vienna meeting “an opportunity for all parties to exchange opinions about the method and timing of missing commitments under the nuclear agreement. We are neither pessimistic nor optimistic about the outcome of the current meeting. If the desire, seriousness, and honesty of the United States are proven, it may be a good sign of the future of the agreement and its full implementation in the coming weeks.”

Rabiei added that Trump’s “maximum pressure” policy had failed and said, “we were at the starting point of reviving the agreement.”

Ahead of the talks and with the aim of increasing pressure on the United States, Iran’s Press TV quoted a source close to the Iranian delegation as saying that Malley, the U.S. special envoy for Iranian affairs, was in Vienna, but was not expected to participate in the Joint Commission talks. “Malley is expected to leave with empty hands unless he removes all American sanctions,” the source stated. At the same time, the Iranian media all carried the same message: “All the cruel sanctions must be removed.”

Until recently, the U.S. administration was able to withstand the Iranian pressure and demand in return at least a gradual return to the framework of the negotiations. Given Iran’s determination and uncompromising stance, accompanied by the continued violations of the nuclear deal, perhaps the administration’s firm stance on full Iranian compliance as a condition for lifting sanctions will crack. Against this backdrop, it seems that the chances of the United States “expanding and improving” the agreement to include the issue of missiles, Iran’s harmful regional activities and human-rights violations in its territory are very slim.

Looming in the background are Iran’s presidential elections, coming up in two months, which toughens Iran’s stance demanding the lifting of all sanctions and opposing “amendments” to the nuclear deal. This position puts the American administration under domestic pressure, especially in Congress, and sharpens the dilemmas it faces not only regarding policy vis-à-vis Iran, but also in the Middle Eastern and Asian arenas in which Iran operates, especially in Yemen (where missiles and drones continue to be fired at Saudi Arabia), Iraq, Syria and Lebanon, and with regard to the strategic economic agreements Iran signed with China.