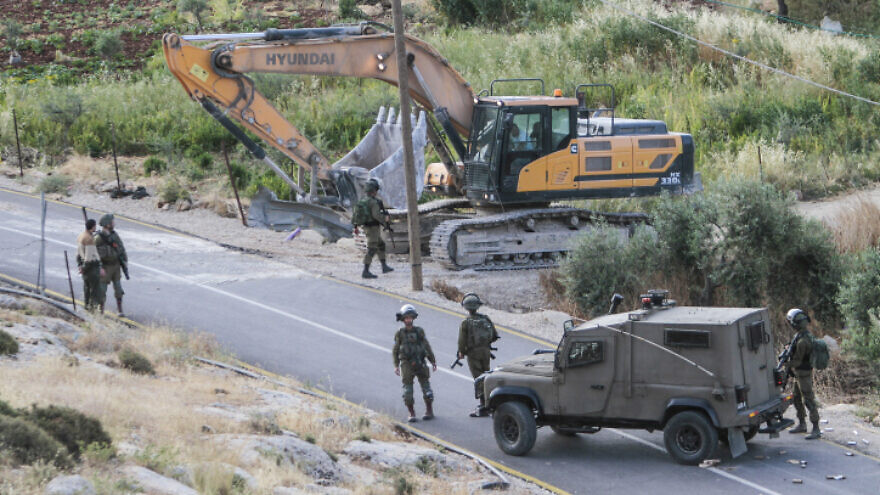 IDF soldiers stand guard as a bulldozer demolishes a Palestinian house that was built without a permit in the village of Beit Dajan, east of Nablus, May 9, 2022. Photo by Nasser Ishtayeh/Flash90.
Spread the word.
Help JNS grow!
Share now:

(December 20, 2022 / JNS) A document composed by the European Union’s mission in eastern Jerusalem and defined as secret exposes the E.U.’s intention to help Palestinians gain control over Area C of Judea and Samaria, commonly known as the West Bank, Israel’s Channel 13 revealed on Monday.

Under the Oslo Accords, Judea and Samaria is divided into three zones with Area C falling fully under Israeli control.

The six-page document calls for mapping the territory in order to prove Palestinian rights to the land and monitoring Israeli archaeological activity, as ancient Jewish ties reinforce Israeli claims.

In response to Channel 13‘s expose, the E.U. said, “As a general rule, we do not refer to documents. The policy of the E.U. is created by its 27 member states. Our policy has not changed—we are committed to a two-state solution with Jerusalem as the future capital of both states.”

The report raised an outcry among politicians and various Israeli groups.

“It is not by chance that the European Union chose to classify the document as secret since it reveals its antisemitic attitude towards Israel for all to see,” tweeted Religious Zionism Party Chairman Bezalel Smotrich.

“It’s not content with accelerating the Palestinian takeover of Area C, it is important for it to thwart Israeli archaeological activity in Judea and Samaria lest the truth be revealed: ‘We have not taken foreign land, nor foreign property of our own; but the land of our ancestors…,'” he said, quoting the Book of the Maccabees.

Regavim, an Israeli nonprofit involved in land issues, said, “The State of Israel must take decisive action against this brazen meddling and prevent the establishment of a terrorist state in the heart of the Jewish homeland.”

Shlomo Ne’eman, head of the Gush Etzion Council and the Yesha Council, said the document shows “what we have been strongly asserting for years: The European Union is working maliciously together with the Palestinian Authority against the State of Israel.

“The matter is nothing less than bizarre—the allies of the State of Israel, the European governments, are actively working to change the borders of our country. In the past, this was a reason for wars between nations,” he said.

Ne’eman called on the incoming government to make the fight against the Palestinian takeover of Area C its No. 1 priority. “Leave everything else and preserve the nation’s lands, because there is nothing more important,” he said.