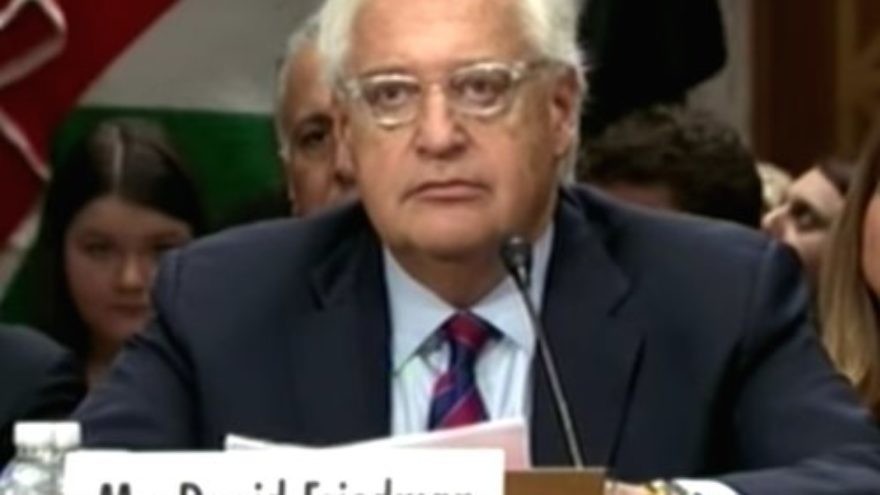 Following the committee-level approval, the full Senate is expected to vote on Friedman’s ambassadorship in the coming days.

A day before their 12-9 vote in favor of Friedman’s appointment, Senate committee members had received a pro-Friedman letter signed by 17 pro-Israel organizations, such as the Zionist Organization of America, the Iron Dome Alliance and the Endowment for Middle East Truth (EMET). The Haym Salomon Center news and public policy group, meanwhile, had obtained a list of more than 30 organizations supportive of Friedman’s candidacy, updated from the letter to include organizations such as the World Jewish Congress and the American Jewish Congress.

“David Friedman’s views represent the consensus of a clear majority of both Americans and Israelis, yet he’s been the target of the very vocal and radical anti-Israel Jewish left,” said Jeff Ballabon, a pro-Israel activist and an organizer of the letter to Senate committee members. “Letters thanking the president and urging the Senate to do the right thing, and outreach to responsible Jewish groups across the ideological and religious spectrum to go on the record supporting David, have now set the record straight that the mainstream of American Jews are solidly supportive of Mr. Friedman.”

“After extensive consideration of his lengthy public record on issues related to Israel and the U.S.-Israel relationship, as well as hearing from Mr. Friedman during his confirmation hearing and a one-on-one private meeting between Mr. Friedman and URJ (Union for Reform Judaism) President Rabbi Rick Jacobs, we oppose the nomination of David Friedman as ambassador to Israel,” the URJ said in a statement.

The progressive lobby group J Street—known for its outspoken support for a two-state solution and criticism of Israeli settlements, as opposed to Friedman’s anti-two state and pro-settlement stance—said it “vehemently opposed” Trump’s nominee, who had called J Street supporters “worse than kapos” in a May 2016 oped for Israel National News, but later apologized for such rhetoric during his Senate confirmation hearing.

Sarah Stern, EMET’s president and founder, recently described the campaign against Friedman as being “based on the false notion that ‘land for peace’ is the only possible solution to the Israeli-Palestinian conflict. Yet, successive Israeli land withdrawals have not gotten Israel and the Palestinians any closer to the goalpost of peace.”

“Unfortunately, for the last several years, American ambassadors to Israel have also exemplified this profound bias against Israel, and have not gotten us any closer to the goal of establishing peace between the Palestinians and Israelis,” she added. “It is therefore refreshing that President Donald Trump has selected an ambassador to Israel, Mr. David Friedman, who does not share the same biases that are so rampant within the State Department.”

Leading Jewish umbrella organizations representing groups across the political spectrum, such as the Conference of Presidents of Major American Jewish Organizations and the Jewish Federations of North America, had also issued favorable statements regarding Friedman’s nomination.

Countering the sentiments of the URJ, the Coalition of Jewish Values—a rabbinic-led organization that says it “articulates an authentic Jewish perspective on current events”—told the Haym Salomon Center in a statement, “Preserving life and seeking peace are values derived directly from the Jewish Bible, and we believe Friedman’s positions are more likely to achieve both of those objectives. Any true compromise must recognize that Jews living in their ancestral homeland are not a ‘threat to peace,’ and must ensure that any new Arab state does not become yet another opportunity for authoritarianism, much less support for terror.”