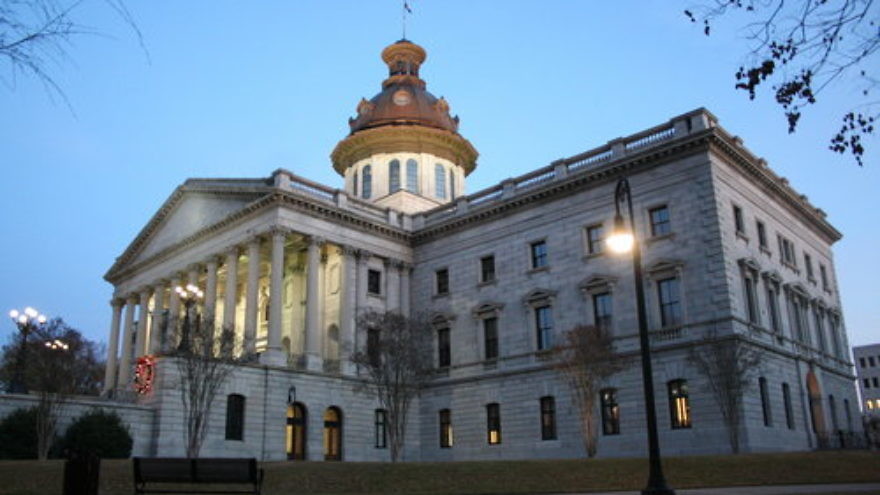 (May 11, 2017 / JNS) South Carolina House Bill 3643, which would have the southern state adopt the U.S. State Department’s definition of anti-Semitism, was on the cusp of passage Thursday but was stalled by a Democratic lawmaker on the final day of the state legislature’s session. The bill’s adoption is now delayed until at least Jan. 9, 2018, the legislature’s next session.

Sources working closely with a bipartisan group of South Carolina legislator told the Haym Salomon Center that State Sen. Brad Hutto (D-Orangeburg), the “lone obstacle” to getting the measure passed, was “targeted and influenced by anti-Israel professors and Students for Justice in Palestine.” A letter sent to Hutto, shared on Twitter, supports the sources’ claims. Hutto offered up a last-minute “objection” to the bill, a procedural maneuver that prevented the measure from being brought to a vote Thursday.

“We are deeply disappointed that Sen. Hutto chose to block H. 3643. This legislation would have clearly defined anti-Semitism and hate speech without limiting anyone’s right to free speech. The bill deserved an up-or-down vote. Though we do not believe Sen. Hutto holds anti-Semitic views, his action has helped those who do,” said David Brog, the founding executive director and a current board member of Christians United for Israel.

In a March 9 speech to the South Carolina House, Clemmons said, “[U.S.] Sen. [Tim] Scott encouraged me, along with Sen. [Lindsey] Graham, as you can see in the letter on your desk, to move this bill forward in South Carolina, to give our educators a tool for defining anti-Semitism, to take the guesswork out of it, have a uniform definition, which is where we must start to push back on anti-Semitic behavior or any type of bigotry.”

Anti-Israel advocates claim the bill suppresses free speech and their right to criticize the Jewish state.

According to the State Department’s definition, “Anti-Semitism is a certain perception of Jews, which may be expressed as hatred toward Jews. Rhetorical and physical manifestations of anti-Semitism are directed toward Jewish or non-Jewish individuals and/or their property, toward Jewish community institutions and religious facilities.”

Caroline Nagel, an associate professor of geography at the University of South Carolina, told The Post and Courier in March, “This language would shut down legitimate debate on South Carolina campuses about policies of the state of Israel and would equate criticism of Israel with anti-Jewish racism.”

According to The State, a newspaper in Columbia, S.C., “The Orangeburg Democrat (Hutto) echoed free-speech concerns voiced by college groups and pro-Palestine advocates that the State Department definition could be interpreted to punish on-campus criticism of Israel. He also said the bill infringes on academic freedom and micromanages colleges.”

Kenneth L. Marcus, president of the Louis D. Brandeis Center for Human Rights Under Law, said research continues “to show an alarming increase in anti-Semitism on our nation’s college campuses. South Carolina has exactly what it needs to attack this rapidly spreading virus and protect Jewish students from rising hate. The bill enjoys widespread bipartisan support in both chambers. Shamefully, however, one legislator has fallen for a completely false mischaracterization of the bill and is standing in the way of giving Jewish students the protections they need and deserve.”

Marcus said the bill “does not restrict speech. That is completely false. It is shameful that one legislator cannot see through the spin to protect his constituents. We hope that his colleagues will open his eyes to the truth about the bill and encourage him to do the right thing.”

Clemmons told the Haym Salomon Center, “All Brad [Hutto] did today was empower the voice of Jew-haters on South Carolina campuses, unfortunately. Our bill that defines anti-Semitism, would have given administrators an important tool—uniform definition for anti-Semitism, so they can treat discriminatory acts against Jews just as they would against any other minority. Unfortunately, the Senate has robbed South Carolina of that ability.”