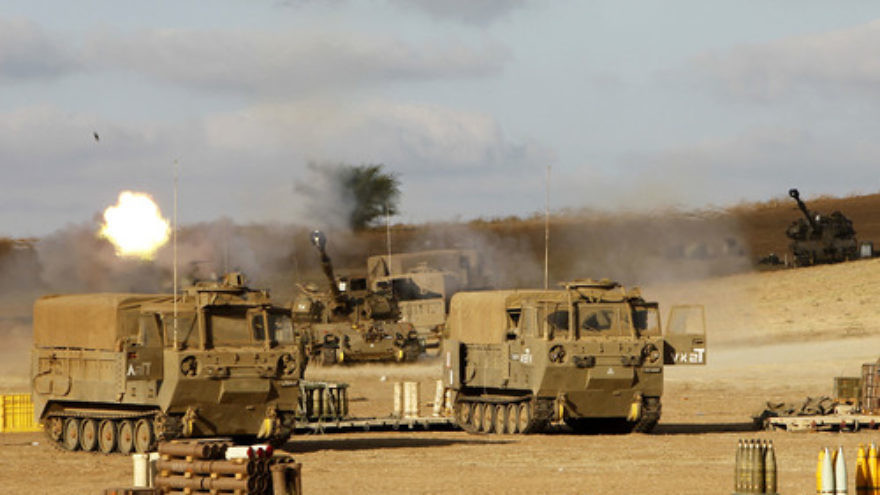 The Israel Defense Forces Artillery Corps fires shells at Gaza on July 18, 2014, after Israeli forces began a ground invasion into northern Gaza amid "Operation Protective Edge." Following the operation, Hamas continues to control Gaza and openly considers any truce with Israel as a time to re-arm for the next conflict. Credit: Miriam Alster/Flash90.
Republish this article
1681 WORDS
Spread the word.
Help JNS grow!
Share now:

(September 19, 2014 / JNS) Following Israel’s Operation Protective Edge this summer, Hamas continues to control the Gaza Strip and openly considers any truce with Israel as a time to re-arm for the next conflict. Across Israel’s northern border, Hezbollah has been fighting to preserve the regime of Syrian President Bashar al-Assad, but still poses a danger to the Jewish state. Meanwhile, the Islamic State has exploded across Iraq and Syria in a spectacle of unprecedented brutality that could one day also knock on Israel’s door.

What should Israel’s strategy be regarding this triumvirate of terror groups? JNS.org took the pulse of three Middle East and terrorism experts on the issue.

Where things stand with Hamas, Hezbollah, and Islamic State

Hezbollah and Hamas “pose a very particular threat to Israel but also a very special dilemma,” said Natan Sachs, a fellow at the Center for Middle East Policy at the Brookings Institution.

“Both groups are not just terrorist organizations, but also very large political parties, which control territory adjacent to Israel,” he told JNS.org. “They have long traditions and complex political and military situations.”

“On the one hand [these organizations reflect] the real grievances of a large public” by providing welfare services and winning elections, but “on the other hand [they continue] executing terrorist attacks against civilians,” Ganor told JNS.org.

For instance, Hamas has won Palestinian hearts by providing social services to the population, and it was elected as the governing group of the Gaza Strip in 2006. Hezbollah’s current leader, Hassan Nasrallah, was also a member of the al-Dawa al-Islamiya movement in Lebanon, which subsequently evolved into a political party under Hezbollah that has 12 seats in the Lebanese parliament. Islamic State is on the path to adopting a similar strategy, Ganor believes.

Given their reluctance to classify terror groups as such, many countries will find themselves “quickly dealing with the same dilemma with regard to the Islamic State, the  [Syrian] al-Nusra Front, and other groups,” Ganor said.

Israel’s strategy on Hamas and Hezbollah

According to Ilan Berman, vice president of the American Foreign Policy Council (AFPC), “the Israeli government is selling Operation Protective Edge as a strategic tie,” but the reality is “that Hamas has gotten a lot of benefit out of the conflict, too.”

Hamas initiated this summer’s conflict as a cry for help, because the group was bankrupt and felt abandoned by its traditional patrons, Iran and Egypt. Hamas’s unity government with Fatah was supposed to be an equal partnership, but Hamas ended up becoming a junior partner, not receiving legitimate consideration for cabinet posts. Therefore, the conflict was meant to show that Hamas is a “force to be reckoned with,” Berman told JNS.org.

When it comes to dealing with a hybrid terrorist organization like Hamas, “military action, as important as it is, does not eliminate the organization,” said IDC’s Ganor.

“It might hurt or temporarily disable the organizations’ military capability, but these organizations are already based and rooted inside the society where they live and whom they pretend to represent,” he said.

For several years, the Israeli government has avoided calls to overthrow Hamas and has preferred a policy of containment through a series of blockades, with the hope that Gazans would overthrow the terror organization. Additionally, Israel fears that Hamas could be replaced by a more radical terror group or that it would be forced to reoccupy Gaza, which it unilaterally evacuated in 2005.

“By containing Hamas, through the enforcement of a blockade, Israel hoped that the people of Gaza would overthrow Hamas,” Sachs said. But despite being financially weakened and internationally isolated, Hamas has proved resourceful, and Israel “should have no illusions that Hamas will disappear anytime soon,” said the Brookings analyst.

Ganor believes this summer’s conflict was a historic opportunity for Israel to defeat Hamas without the involvement of Hezbollah and the tacit support of Arab nations. This would have only been possible with a ground operation that led to the takeover of large territories—not necessarily the whole Gaza Strip, but large parts of it. The summer conflict, according to Ganor, presented “a collection of situations that has not existed before and I’m not sure will be [there for Israel] in the future.”

The vacuum resulting from the defeat of Hamas would not necessarily be filled with groups such as Islamic State. Sachs is in favor of bringing Mahmoud Abbas’s Palestinian Authority (PA) back to power in Gaza, as the PA has largely cooperated with Israel on policing the West Bank and thwarting terrorism there. Since Hamas is designated as a terrorist organization by the U.S., EU, Israel, and Egypt, donor countries will only work with the PA to provide funding and materials to rebuild Gaza.

“One way to do that would be not to oppose so vociferously Palestinian unity, which would allow Fatah to have more of a stronghold in Gaza,” Sachs said.

This summer’s conflict also highlighted a shortfall in the Iron Dome missile defense system. AFPC’s Berman said Israeli defense officials have told him that the rockets shot by Hamas were harder for the Iron Dome to intercept than anticipated because they were poorly constructed and tilted side to side when flying, like Iraqi scuds during the first Gulf War.

This has led to fast-tracking the production of David’s Sling, a new defense system designed to intercept larger, longer-range, and cruder rockets, as well as cruise missiles. David’s Sling is especially important with regard to Hezbollah, which has at least 100,000 rockets—10 times as many as Hamas—including thousands of long-range missiles that carry up to a ton of warheads and are hidden in deep underground bunkers within Lebanon, according to IDF estimates.

“Hezbollah is a very capable organization, and whenever its finds itself free from the Syrian civil war, it will see Israel again as its prime target,” Sachs said.

According to a recent IDF assessment, Hezbollah could capture a few northern Israeli towns such as Rosh Hanikra for several hours until they are dislodged. But for now, “the Israelis are trying to be very quiet with respect to Hezbollah because Hezbollah is fighting and dying in Syria, and when your enemy is doing something like that, you don’t want to distract him,” Berman said.

Islamic State has exploded onto the scene in the Middle East through sheer terror as well as a shrewd military and political strategy. Forming out of the remnants of al-Qaeda in Iraq, the terror group took advantage of the chaos of the Syrian civil war and political instability in Iraq to take over large swathes of territory, and began administering medieval-style Islamic justice to anyone who stood in their way.

“When they arrived at cities and villages [in Iraq], the military forces just fled and left their equipment there,” Ganor said.

Yet none of the experts consulted by JNS.org believes Israel is a primary target for Islamic State at the moment, which means the Jewish state may not need to be at the helm of the current battle against the group.

“There’s a huge difference between an Islamic State flag being waved on the Temple Mount and an actual, operational cell that exists in the Gaza Strip. In Israel, you’re seeing the former but not the latter,” Berman said.

Nevertheless, there have been indications that Israel is interested in joining the 10-nation coalition against Islamic State, which is being led by the U.S.

While Israel’s inclusion in the coalition is possible, “it’s going to be a hard sell,” Berman said. Specifically, Israel may be a liability for the U.S., which is trying to build a coalition out of Arab states that mostly do not have relations with Israel.

“Israel is not going to get involved in any airstrikes or sending troops in, and I don’t believe that it should,” Sachs said.

But Israel can act in other ways. A senior Israel Defense Forces officer recently quoted by Haaretz confirmed that Israel is providing intelligence to the U.S. on Islamic State, including satellite imagery.

If Islamic State reaches Jordan or Lebanon, “things can change very rapidly” and “you’re going to see very quickly a lot of coordination against the Islamic State,” even between Israel and Fatah [Abbas’s party], explained Berman, who added the disclaimer that he is “just not seeing that yet because the threat is still conceptual.”

Islamic State could also become a threat to other Middle East countries such as Saudi Arabia and the Gulf states, Turkey, and Iran.

“When you speak today with decision-makers and security sources, you get the feeling that Iran… is ‘the devil we know’ and ‘the enemy of my enemy is my friend,’” said Ganor, who believes that attitude is a big mistake.

“When Europe and the U.S. wake up from their dream… they will realize that it is a nightmare because ‘the enemy of our enemy is a bigger enemy of ours,’” he added.

Correction: This story initially incorrectly stated in the first paragraph that Hezbollah was fighting “against” Syrian President Bashar al-Assad. In fact, Hezbollah is on Assad’s side in the Syrian civil war.