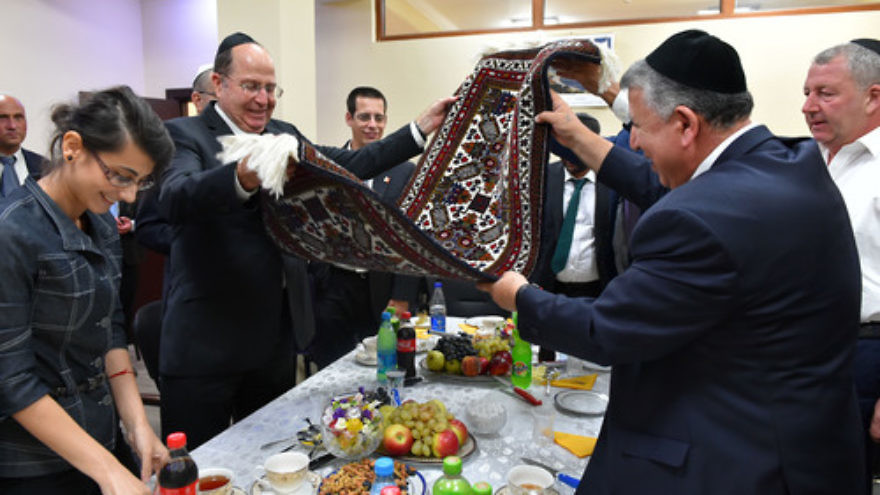 (December 22, 2014 / JNS) Since its founding in 1948, Israel has found Muslim-majority allies hard to come by. Yet an improbable romance continues to develop between the Jewish state and Azerbaijan.

Israeli Defense Minister Moshe Ya’alon took a surprise trip to Azerbaijan in September, marking the first-ever visit by the holder of his position to a Muslim-majority nation in the Southern Caucasus region. Israeli Foreign Minister Avigdor Lieberman and former president Shimon Peres have also visited Azerbaijan, and Azeri dignitaries have made the trip to Israel. Though it is most often attributed to a shared interest in combating the threat posed by Iran, experts say the blooming Israeli-Azeri friendship goes much deeper.

“Having a close link with a Shiite-majority nation helps shatter the notion of an Islamic rejectionist front against Israel,” said American Jewish Committee (AJC) Executive Director David Harris, who in 2012 received the “Dostlug” Order of Friendship, Azerbaijan’s highest honor for a foreign citizen, from Azeri President Ilham Aliyev. “For Azerbaijan, located in a tough neighborhood, Israel is a very valued source of economic and strategic assistance.”

While warm Israeli-Azeri ties have received increased media attention of late, the phenomenon is not a new one. Malcolm Hoenlein, executive vice chairman of the Conference of Presidents of Major American Jewish Organizations, recalled a sympathetic environment for Jews and Israel when the 52-member umbrella group visited Azerbaijan in 2006.

“We were taken aback by the welcome we received, by the freedom enjoyed by the Jewish community, the fact that Israeli flags fly in the synagogues, that when we met with Jewish students on campus and asked them about anti-Semitism, they said they never experienced it, nor anti-Israel expressions, except from very limited groups,” Hoenlein said.

Dr. Avinoam Idan—the senior fellow with the Central Asia-Caucasus Institute & Silk Road Studies Program at Johns Hopkins University in Baltimore as well as a University of Haifa professor—told JNS.org that Azerbaijan often comes under attack from violent Islamist groups, including some sponsored by Iran, which borders Azerbaijan in the south. The chief foreign policy concern of Israel in recent years, meanwhile, has been the advancement of the Iranian nuclear program.

“Azerbaijan also views strong ties with Israel and the Jewish world as an important part of achieving strong ties with the United States, which have waned in recent years,” said Idan, who served for seven years in the Israeli embassy in Moscow during the fall of the Soviet Union, when he was intimately involved in establishing diplomacy between Israel and the Caucasus nations.

“Azerbaijan is geopolitically a very strategic country,” said Hoenlein. “There are tens of millions of Azeris living in Iran. The [Jewish community and Israeli] relationship with central Asian countries, generally, I think is very important. They are under pressure from Russia, from Islamic fundamentalists, from Iran, from Wahhabism, and we have to do a [good] job to help bolster them.”

Yet Azeri officials prefer to downplay the role of the Iranian threat in their nation’s relationship with Israel. Mammad Talibov, counselor of political and legal affairs at the embassy of Azerbaijan in Washington, D.C., told JNS.org that “we always point out that our bilateral relations are neither linked with, nor aimed against, any third parties.”

“Simply put, our relationship with Israel is not about Iran,” he said. “It is about Azerbaijan and Israel. We have robust economic relations, especially in the area of technology, [and] defense ties, and [we] work together to promote peace and tolerance. We are also proud that the Azeri Jewish community serves as a bridge between the two nations.”

Asim Mollazade, a member of the Azeri parliament and chairman of the country’s Democratic Reforms political party, expressed the same sentiment. He told JNS.org that Iran “is not so important [of a] factor in making Azerbaijan and Israel friends and partners,” and that the “basis of our relations is [the] historic links between Jews and [the] Azeri people.”

Mollazade, however, did acknowledge that both Azerbaijan and Israel face threats in their respective turbulent regions, chief among them “international terror,” which means “cooperation on security issues is important for our partnership.”

Rafael Harpaz, Israel’s ambassador to Azerbaijan, told JNS.org that there are currently about 30,000 Jews in Azerbaijan, though the American Jewish Joint Distribution Committee estimate is about half that number. The Azeri Jewish community includes the “Mountain Jews” (who have lived there since the 5th century AD), Ashkenazi Jews, and a small number of Georgian Jews.

“I have never been in a place like this in my life. You see what happens in Western Europe, but here you can [openly] waive an Israeli flag outside,” Harpaz said in an interview translated from Hebrew.

Last year, when a new Torah scroll was dedicated at a synagogue in the Azeri capital of Baku, the ceremony was attended by Muslim, Russian Orthodox Christian, Albanian-Udi Christian, and Catholic leaders.

“Where else in the world can you see such a thing?” Harpaz asked rhetorically.

Idan said that while anti-Semitism was prevalent in the more Slavic parts of the Soviet Union, Jewish life in the southern Caucasus countries—mainly Azerbaijan and Georgia, where there were large Jewish communities—“was even during Soviet times a completely different reality.” People like Aliyev, the current president, grew up having very positive relations with Jews.

“Aliyev often cites his Jewish teachers as having a very formative influence on him,” Idan said.

“We are proud of [our] centuries-old traditions on inclusiveness,” said Talibov. “Azerbaijan and Israel are friendly countries, and Jewish citizens of Azerbaijan are proud citizens of our nation. We see this as very normal.”

In Israel, meanwhile, there is a large community of Jewish immigrants from Azerbaijan, who made aliyah from the 1970s through the early 1990s, at the time of the Soviet Union’s collapse.

Idan noted that at the government level, Azerbaijan was one of the only Muslim-majority nations that did not publicly criticize Israel during the recent Gaza war, despite pressure to do so from other Muslim countries and from some Azeris who called for an embargo on oil sales to the Jewish state. Azerbaijan supplies 40 percent of Israel’s oil through the Baku-Tbilisi-Ceyhan Pipeline.

“Israel doesn’t have experience in the field of energy [in areas like drilling, exporting, and financing]. We just recently discovered natural gas, [and] we don’t have many energy engineers,” said Harpaz, meaning Israel learns about those disciplines from Azerbaijan.

Israel, in turn, has greater experience than Azerbaijan in fields such as trade, telecommunications, cyber-technology, agriculture, medicine, and tourism.

“We are willing to share [expertise] with our friends the Azeris,” Harpaz said. “There is a lot of activity by Israeli companies [in Azerbaijan].”

In early December, during the BakuTel-2014 20th Azerbaijan International Telecommunications and Information Technologies Exhibition, President Aliyev himself visited the national pavilion of Israel. Fourteen Israeli companies participated in the exhibition.

Israeli cultural delegations, from groups like the Jerusalem Symphony Orchestra, have also visited Azerbaijan. Currently, the Azeri national airline Azal flies twice a week between Baku and Tel Aviv. Azal did not stop flights to Israel during this summer’s Gaza war, even when other airlines—including American carriers—temporarily did so.

Aliyev’s positive attitude about Israel was also evident back in 2009, when then Turkish Prime Minister (and now president) Recep Tayyip Erdogan publicly chastised Israel’s president, Peres, during a panel at the World Economic Forum in Switzerland.

“When it comes to killing, you (Israel) know well how to kill people,” Erdogan said at the time. What was not publicized, according to Idan, is the fact that immediately after the encounter between Peres and Erdogan, there was a private meeting scheduled between Peres and Aliyev. But after Erdogan’s comments, Aliyev “decided to open his meeting [with Peres] to the media and he made an effort to clearly show his support for Peres and Israel,” said Idan.

Yet Aliyev is not a controversy-free figure. Allegations of financial and electoral corruption have long been associated with his government. Most recently, the Azeri government ordered the arrest of journalist Khadija Ismayilova, who is known for reporting on corruption in Azerbaijan. Many viewed her arrest to be politically motivated.

“Broadly speaking, we are deeply troubled by restrictions on civil society activities, including on journalists in Azerbaijan, and are increasingly concerned that the government there is not living up to its international commitments and obligations,” said U.S. State Department spokeswoman Marie Harf.

Jewish leaders Hoenlein and Harris both took issue with sentiments that internal developments in Azerbaijan should affect Israel’s relationship with the country.

“Countries that have demonstrated friendship to their Jewish communities—even though their records on human rights issues and other things are not perfect, and we know that—we have to try to encourage them to change, but at the same time to recognize the progress that has been made and the importance of the relationship with them,” Hoenlein said.

“Full democracy and transparency can take decades to develop,” said Harris. “And if these were the sole litmus tests for foreign relations, then both the U.S. and Israel would have far fewer partners.”

Despite its warm relationship with Israel, Azerbaijan does not yet have an embassy in the Jewish state. Talibov called this a “technical issue,” saying his country is “working with the Israeli side on the matter.”

Idan said that the lack of an Azeri embassy in Israel may stem from Azerbaijan’s fear of backlash from Iran and other Muslim-majority nations. Yet the case of Azerbaijan proves that “having an embassy is not a condition for the advancement of relations between nations,” he said.

“[Azerbaijan] is a fairly rare example of a Muslim country on the one hand, and on the other hand a country that has such a close relationship with a country like Israel,” said Idan.