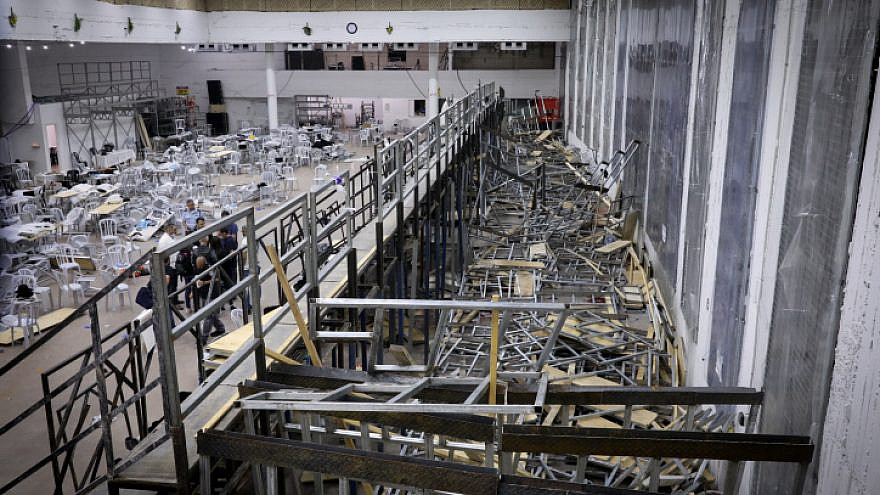 (May 18, 2021 / JNS) Two people were killed on Sunday evening during prayers at an unfinished synagogue in the town of Givat Ze’ev, near Jerusalem.

Binyamin Rubinstein, 23, and 13-year-old Meir Globerman, whose funerals were held in Jerusalem late Monday night, were among the nearly 200 members of the Karlin-Stolin Chassidic community injured when temporary bleachers set up at the site collapsed.

Widely circulated security-camera footage of the tragedy, which took place less than three weeks after the disaster at Mount Meron on Lag B’Omer, shows the moment when the bleachers caved under the weight of the hundreds of worshippers.

Israeli news crews joined the hundreds of paramedics and police at the site, as victims were treated on the scene and evacuated to the hospital.

Turjeman stressed that the site had not received the necessary permits to host large gatherings.

“The station commander informed the head of the Givat Ze’ev Local Council that this structure is forbidden for prayers and large gatherings,” he said.

Givat Ze’ev Local Council head Yossi Avrahami told Channel 12 that he had “instructed my people not to approve this event at any stage,” and had “erected roadblocks with signs indicating that the site is dangerous.”

A Karlin-Stolin spokesman said on Monday night, after the end of the Shavuot holiday, that the community would “act with transparency and responsibility, and in cooperation with the authorities investigating this severe incident.”