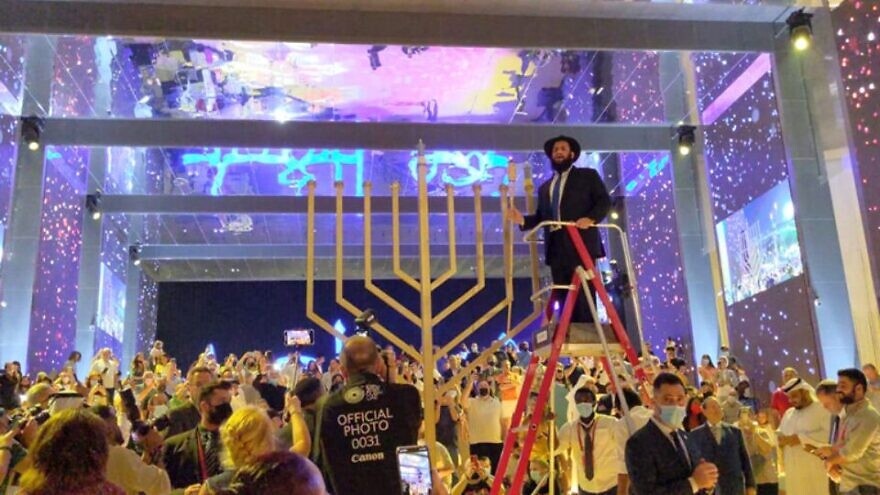 Duchman performed the ritual in the presence of local leaders, businesspeople, Jewish residents of the UAE and tourists from around the world. The event included a performance by the members of the Jewish community’s children’s choir and was attended by students of the community’s Hebrew school.

The Bahraini pavilion also had a candle-lighting ceremony, attended by former Bahraini Ambassador to the United States Houda Nonoo and members of the Gulf state’s Jewish community. Thousands of Jews, none of them native-born, now live in the UAE and other Gulf states.

The Dubai candle-lighting event, which would not have been possible prior to the signing of the Abraham Accords, took place as a result of the efforts of the Jewish National Fund in the UAE. Israeli Consul General in Dubai Ilan Sztulman and Commissioner-General of Israel’s EXPO 2020 pavilion Elazar Cohen were among those in attendance.

Dubai has an Ashkenazi synagogue known as “the Villa,” which was opened around a decade ago in the private home of a South African attorney. Jews interested in praying there learned of its location by word of mouth. Another synagogue, Sephardi, is situated in the private residence of Duchman, from Chabad, who arrived in Dubai from Morocco seven years ago.

A third, more imposing synagogue, along with a mosque and a church, will be opened as part of the Abrahamic Family Campus, to be established on Abu Dhabi’s Saadiyat Island. Alongside the three houses of worship, the campus will include a common garden in which a small museum and educational center will be built. The Abrahamic Family Campus is set to open in 2022.