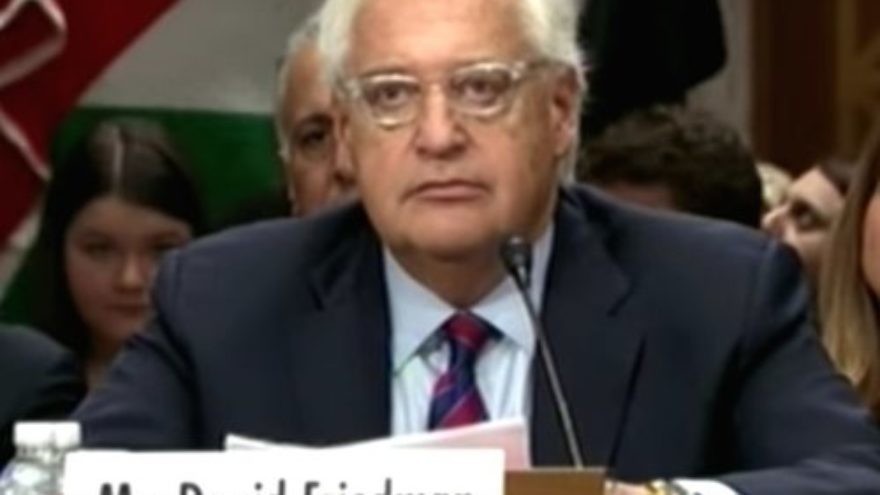 David Friedman was confirmed Thursday by the U.S. Senate as America’s ambassador to Israel. But that was only after a highly contentious debate, and unfortunately, only because there is a Republican majority in the Senate.

The same was true of Friedman’s prior approval by the Senate Foreign Relations Committee. The committee’s minority leader, Sen. Ben Cardin (D-Md.), voted against him, as did every single Democrat on the committee. Sen. Dianne Feinstein (D-Calif.), wrote March 6 that Friedman “lacks the necessary temperament to serve in such a crucial position,” and that his “divisive rhetoric and dangerous positions are contrary to long-held policy and wouldundermine our national security by inflaming tensions in the region.”

What made Friedman’s nomination so contentious? Among the reasons outlined by Sen. Feinstein is that he has supported recognizing Jerusalem as the capital of Israel and moving the American embassy from Tel Aviv to Jerusalem. He has directly supported settlement activity, because he was president of the American Friends of Bet El Yeshiva, and he has questioned the wisdom of the Oslo Accords.

In the summer of 2005, I was in Israel, in the days of the unilateral withdrawal from Gaza. I watched and listened as the nation was engaged in a gut-wrenching and internally divisive debate. I saw how Israeli soldiers had been trained not to feel, as they forcibly removed Israeli settlers from their homes. One of those soldiers confided in me, “This is not what I signed up for.”

I listened to the radio when one mother said, “Mr. Prime Minister, will you pack up my son’s room? I have not been able to go into it since he was killed in Lebanon. Will you uproot the tree in my yard that was planted in my sons’ memory?”

Jewish philanthropists funded the greenhouses so that there would be a economic infrastructure for the young, nascent Palestinian enterprise, and many rabbis argued that we should keep the synagogues, to turn them into mosques, because,“After all, we all pray to the same God.”

As soon as the last vestige of a Jewish presence was removed from Gaza, and the blue-and-white Israeli flag was lowered, the greenhouses and synagogues were all destroyed in a frenzied atmosphere of hate-infested anarchy.

Yet the government of Israel and most of the Western policy world were convinced at the time that “this will finally prove to the world how far Israel is willing to go for peace, even in the absence of a negotiating partner.”

Since then, Gaza has been used as a launching pad for thousands of Hamas rockets into Israel, necessitating several wars and much loss of life on both the Palestinian and Israeli sides. In southern Israel, when an alarm siren is sounded, Israelis have 15 seconds to find shelter. By now, the rockets have a trajectory that can reach anywhere in the state of Israel.

Israel’s morality during the two Gaza wars has been questioned in the court of international public opinion, largely because of Hamas’s sinister use of children and women as human shields, which inflates their civilian death count.

In shaping America foreign policy, most Americans would like to believe that certain ethical qualities are in the mix, such as intellectual honesty and moral integrity. These qualities, whether part of an individual’s nature or those of national policy, often necessitate some difficult introspection.

Sometimes it even involves the painful admission that one has been wrong—even if one has been wrong for an extremely long time. It is human nature that the longer the time, the deeper the resistance to change.

Our foreign policy “experts” have clung to certain misguided theories for generations now, such as “land for peace.” What we have seen through decades of empirical, and often heartbreaking experience is that this formula simply hasn’t worked. If the objective is “peace,” one must honestly ask oneself if any of the politically gut-wrenching and internally divisive land withdrawals from the Sinai, Gaza, southern Lebanon and parts of Judea and Samaria have actually brought us any closer to that objective of peace.

Rather than challenge the premises of this formulation, those in the State Department’s echo chamber simply dug their feet in further and rationalize its failure. Each time, there is another excuse. “Israel hasn’t given enough land,” or “Gaza was without a negotiating partner.”

All of the State Department apparatchiks who stubbornly clung to this mantra were completely in favor of each of these withdrawals. Then, when those land withdrawals did not bring us closer to the designated objective, the diplomats came up with convenient, after-the-fact rationalizations.

Any scientist with an ounce of intellectual integrity would say we have reached the null hypothesis, and that it is time to re-examine the premises of the equation in the Israeli-Palestinian conflict. David Friedman, a fresh voice, is a step in the right direction.

Sarah N. Stern is founder and president of the Endowment for Middle East Truth, which describes itself as an unabashedly pro-American and pro-Israel think tank and policy institute in Washington, D.C.