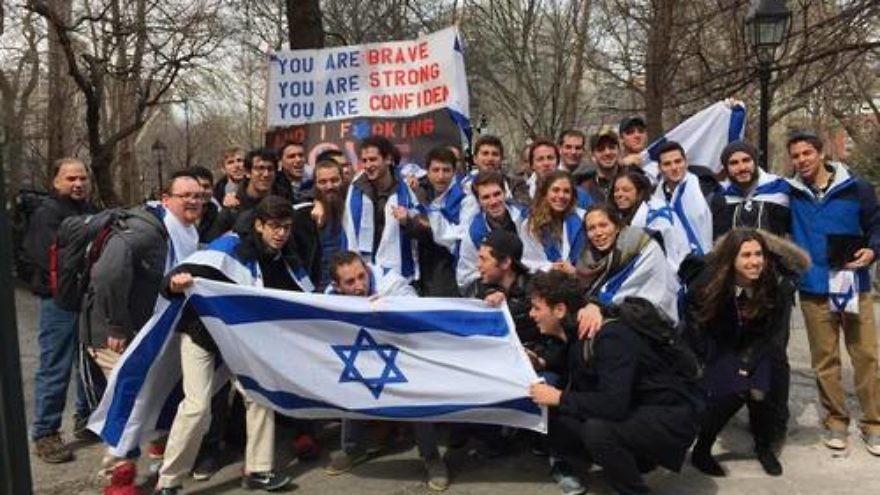 In late March, Mendy Boteach (son of media personality Rabbi Shmuley Boteach) and about 20 of his fellow New York University students positioned themselves near the “Israeli Apartheid Wall” in Washington Square Park with a 10-foot sign quoting Lady Gaga lyrics, reading, “You are brave, you are strong, you are confident, and I f***ing love you Israel.” Credit: Courtesy Rabbi Shmuley Boteach.
Republish this article
1272 WORDS
Spread the word.
Help JNS grow!
Share now:

(April 13, 2015 / JNS) Leading up to the 67th birthday of the State of Israel, more commonly referred as Yom Ha’atzmaut (Israel Independence Day), it may be difficult to stay upbeat given the rising anti-Zionism and anti-Semitism around the world. On American college campuses, the situation has been especially grave—but the picture may not be as gloomy as it seems.

A report released in February by the Israel on Campus Coalition (ICC) revealed that pro-Israel activity on U.S. campuses has actually increased in the wake of the war between Israel and Hamas last summer and the uptick in terrorism against Jews in Israel last fall.

While by no means all-encompassing, the following is a snapshot of some of the college campuses on which pro-Israel activists have taken unique steps or have made major strides in their quest to support the Jewish state.

In late March, students at New York University found a creative way to oppose campus events relating to the annual anti-Israel showcase known as “Israeli Apartheid Week.” Mendy Boteach, the son of media personality Rabbi Shmuley Boteach, and about 20 of his fellow students positioned themselves near the “Israeli Apartheid Wall” in Washington Square Park with a 10-foot sign quoting Lady Gaga lyrics.

“You are brave, you are strong, you are confident, and I f*cking love you Israel,” the sign said.

“I congratulate Mendy and all his friends for standing up for Israel in its great hour of need. And while I might have expressed it slightly different to Lady Gaga, let me concur: ‘I ABSOLUTELY love you, Israel,’” Shmuley Boteach said.

Also in March, a group of students at the University of New Orleans launched a campaign to both combat the Boycott, Divestment and Sanctions (BDS) movement against Israel and to call on the U.S. government to stop funding the Palestinian Authority (PA).

Pro-Israel student activist Chloe Valdary, who organized the initiative, told the Louisiana-based publication Hayride that the petition is “actually pro-Palestinian” because “we (the U.S.) send aid to the PA, and instead of using it to build infrastructure and a good community for their people, they pocket the money and actually persecute their own people.”

The amendment was led by senior Chelsea Andrews, a pro-Israel student activist with CUFI on Campus, the school’s division of the Christian Zionist organization Christians United for Israel.

“At Liberty University we stand with Israel, because as Christians, as Americans, and as individuals focused on freedom and human rights, there is no alternative,” Andrews said after the amendment passed.

Although California schools like Stanford University have developed a reputation for being hubs of BDS activity, more than 150 current and former faculty members and researchers at Stanford recently signed one of two petitions opposing the Stanford Student Senate’s passing of a BDS resolution in February.

“The goal of our campus’ recent anti-Israel campaign wasn’t to open up discussion on these complex matters but to dictate simple, outright excoriation. In this respect divestment was less its goal than a tactic, a deceptively benign way to bring to fruition an anti-Israel resolution,” the statement said.

At the University of Nevada, Las Vegas in March, members of the Jewish fraternity Alpha Epsilon Pi (AEPi), together with other Jewish groups, succeeded in getting the school’s student senate to adopt a policy statement against anti-Semitism.

The student senate adopted the statement in the wake of a speech given by AEPi President Nathaniel Saxe about the rise of anti-Semitism at universities around the country. The statement’s five conclusions included: a recognition of the right of Israel to exist as a nation, a recognition of the right of Israel to defend itself against threats to its existence, a belief that a Palestinian state and Israel should exist in peace and resource equality with one another, a condemnation of the actions of violent terrorist organizations, and a proclamation to actively boycott religious persecution and discrimination at every level.

In February, the Student Government Association of the University of Georgia passed a resolution calling for increased university investment in Israel.

The campus’s chapter of Students Supporting Israel initiated the resolution, leading the school’s student senate to endorse “the Expansion of Study Abroad Opportunities in Israel.”

Israel is “one of the most stable countries in the Middle East, and the country with the highest ratings in freedom, human rights, and democracy in the region” and a “global leader in science and technology research and is home to a world-renowned business environment with the most startups per capita in the world,” the senate resolution stated.

Students at Laurentian University in Ontario, Canada, have found a number of creative approaches to promote their love for Israel. In December 2013, the Jewish Students Association put on an event titled “The Amazing Hanukkah Donut Giveaway.” Student volunteers gave away sufganiyot (jelly donuts) to nearly 1,000 students who passed by, offering a mix of Hanukkah and hasbara (public diplomacy for Israel).

In March 2015, the Jewish Students Association teamed up with the LGBTQ alliance Pride for the “Half Off: Circumcision and Sex Toys, the Ultimate Games Night” during Pride Week, an entire week focused on LGBTQ issues. The event also served to counteract Israeli Apartheid Week, a time when many LGBTQ groups align with the anti-Israel movement.

In February, an Israel divestment resolution that had passed at the University of California, Davis (UC Davis) was overturned by a student court on the grounds that the measure was not sufficiently related to student welfare.

The Court of Associated Students, in a 5-0 vote with one abstention, found the passage of the divestment resolution by school’s student senate to be in violation of the UC Davis student government constitution.

According to the student court, the resolution was “primarily a political document” that “did not deal with student welfare to the extent that allowed the ASUCD (Associated Students of the University of California, Davis) Senate jurisdiction to pass.”

In a 7-0 vote, ASWWU resolved that it would not consider BDS resolutions based on national origin because “tensions between students related to foreign conflicts should be managed in a healthy and collaborative manner rather than be exacerbated.”

In February 2014, during Israeli Apartheid Week, the University of Minnesota’s chapter of Students Supporting Israel, which is the founding chapter of the group, got a resolution to pass in the school’s student government that calls for academic collaboration with Israeli universities and study abroad programs in Israel.

The resolution stated “that the Minnesota Student Association supports expanding study abroad in the Middle East, specifically Israel, with a concentration in business, science, engineering and agriculture.”