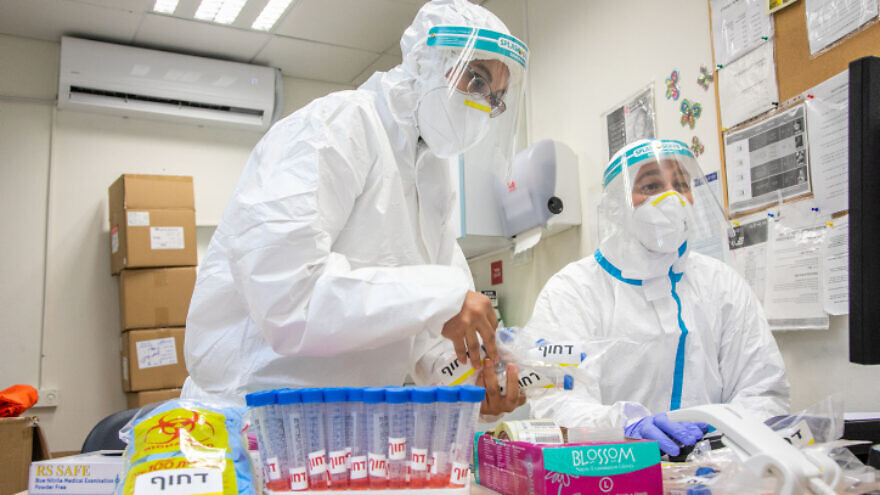 According to Health Ministry data, as of Tuesday afternoon, the COVID-19 death toll  stood at 554, with 349 Israelis listed in serious condition, among them 97 on ventilators. Another 139 patients were listed in moderate condition. In total, the number of coronavirus patients hospitalized in Israel stood at 761.

There were 24,764 active or symptomatic cases nationwide.

On Monday, Esther Agmon, chairwoman of the Israel Association of Biochemists, Microbiologists and Laboratory Workers, told the Knesset Coronavirus Committee that despite the government’s having promised funds for an additional 200 lab workers to help process COVID-19 tests, only 40 had been hired.

Agmon pointed out that the low salaries, which she said have not been raised since 1995, made it difficult to recruit new workers. Additionally, while laboratory workers used to hold bachelor’s degrees, now many have doctoral or post-doctoral degrees, yet are expected to work for the same pay.

Agmon said that since 2019, 20 percent of the staff at Israel’s medical laboratories had left, meaning that the country was hit by the coronavirus epidemic with a shortage of trained personnel.

“The Health Ministry raised the hourly wages of workers dealing with coronavirus by NIS 25 shekels [$7.33], on the condition that they work 235 hours a month, instead of 175. That agreement should apply to all laboratory staff,” Agmon told the cmmittee.

Committee chairwoman Knesset member Yifat Shasha-Biton said that the lab positions “should be staffed as soon as possible.”

Meanwhile, an employee at a large hospital in central Israel who tested positive for coronavirus and was ordered to quarantine himself violated protocol and flew abroad, Channel 12 News reported on Monday.

The patient took a Turkish Airlines flight from Ben-Gurion International Airport to Istanbul. From Istanbul, he flew to Ukraine. The patient reportedly had active COVID-19 symptoms and never informed anyone that he intended to leave Israel.

The Israeli embassy in Ukraine, as well as law enforcement in Israel and Ukraine, has been informed about the incident, as has the airline.

The patient could face prison time if convicted for intentionally spreading disease.

Meanwhile, the coordinator of Israel’s national effort to stem the spread of coronavirus, Professor Ronni Gamzu, released a video on Monday urging the public to be tested if they experienced any coronavirus symptoms. Gamzu said that tests were vital to stopping the spread of the virus, and that testing could reduce the amount of time patients had to spend in quarantine.

Also on Monday, Gamzu faced off with Prime Minister Benjamin Netanyahu at a meeting of the government’s “corona cabinet” over whether or not weekend shutdowns should remain in place.

Gamzu said that in his opinion, there were no grounds for continuing the shutdowns, but Netanyahu argued that the most important thing to do was reduce the spread of the virus.

Netanyahu said that the government needed an orderly plan that would provide a solution to the pressing matter of weekend activity. His office said that the prime minister had instructed ministry professionals to prepare a plan to stop the spread of coronavirus and present it to the Cabinet within 48 hours.

At Monday’s meeting, the ministers did not reach any decision about what steps the government should take next and agreed to reconvene on Wednesday.

Shimon Yaish and Maytal Yasur Beit-Or contributed to this report.