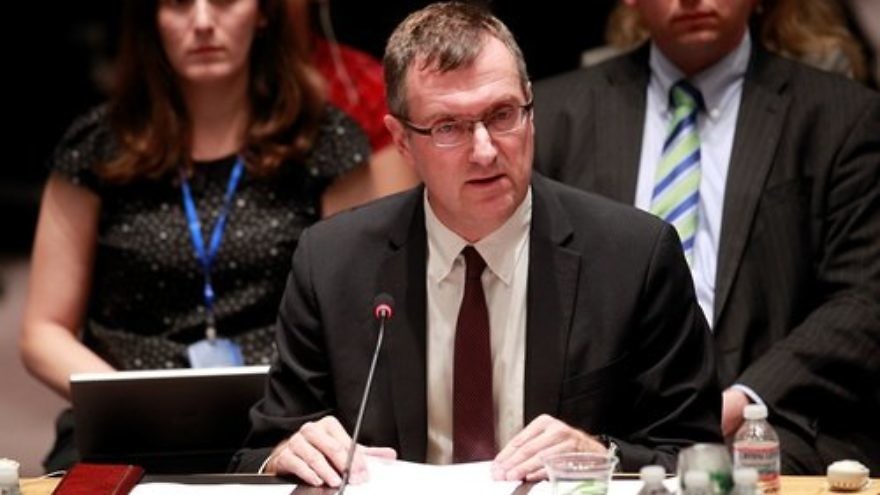 My father, Haim Hendrick Roet, a Holocaust survivor from the Netherlands, addressed the United Nations General Assembly in January, during its annual Holocaust memorial ceremony with this poignant cri de coeur:

“Looking back 70 years,” he said, “it is heartbreaking that as a world, we did not learn enough from the Holocaust.”

The spectacle of an Iranian leader spewing centuries-old canards about Jewish control over foreign governments, financial institutions and the media is hardly new. Anti-Semitism is, after all, the most durable and pliable of all conspiracy theories known to humankind.

What’s deeply disappointing and dangerous, however, is the utter passivity and lack of condemnation that followed this statement. A few years ago, dozens of U.N. delegations took a principled stand against blatant Iranian anti-Semitism and walked out in protest when former Iranian president Mahmoud Ahmadinejad used the same forum to raise similar hateful accusations.

So, where’s the outrage now?

While many in the U.N. laud the Iran nuclear agreement, lift sanction on the world’s leading state sponsor of terrorism, reward the Mullahs with billions of dollars and lucrative trade deals, and welcome the new Iranian president as a so-called “reformer,” official Iranian anti-Semitic statements and Holocaust denial continues unabated and unchallenged.

Meanwhile, the scourge of anti-Semitism, which not long ago many of us considered to be a thing of the past, has metastasized into a global social disease.

In too many places, Jews are again afraid to express their Judaism and be identified outside their homes and communities.  Whether it’s in Brussels, where a man with a Kalashnikov opened fire and murdered four people at the Jewish Museum of Belgium, over the internet, where unimaginable hate is spread through cyberspace at nanosecond speed, on university campuses or even in the halls of the U.N., we must take a stand against what one U.N. secretary-general called “the oldest living hatred.”

Anti-Semitism does not need a reason, only an excuse.

We must adopt a zero-tolerance policy to any sign of anti-Semitism or to any effort to excuse or rationalize it. New haters have been using technology and social media to disseminate their contemptible ideology. To confront them, the international community should agree on a clear definition of anti-Semitism so we can use advanced technology to stop online hate, while, at the same time, carefully preserve the important freedoms of speech and expression that we, as democracies, hold dear.

A few weeks before the Iranian president’s vile statements, the U.N. held an historic High-level Forum on Global anti-Semitism. Bringing the issue front and center at the U.N. is, regrettably, still fraught with roadblocks. Indeed, the year’s High-level Forum was a fruit of the joint efforts of the U.N. missions of Canada, the European Union, Israel and the United States, not the U.N. itself.

Unfortunately, there are those in the U.N. who fear that speaking out and working together to confront anti-Semitism is “too political” or risks antagonizing a certain group of countries, so they stay on the sidelines.

A recent study found that one quarter of the world’s population harbors anti-Semitic beliefs. If the U.N. is a mirror of the world, reflecting all that is good and bad, the rising plague of anti-Semitism requires a U.N. that leads the efforts to eradicate the resurgence of the world’s oldest hatred without excuses and fear.

It’s imperative for the U.N. to fight anti-Semitism with the same urgency it places on combating the other ills of the world.

For Secretary-General Ban Ki-moon rightly reminds us, “A United Nations that wants to be true to its founding aims and ideals has a duty to speak out against anti-Semitism.”