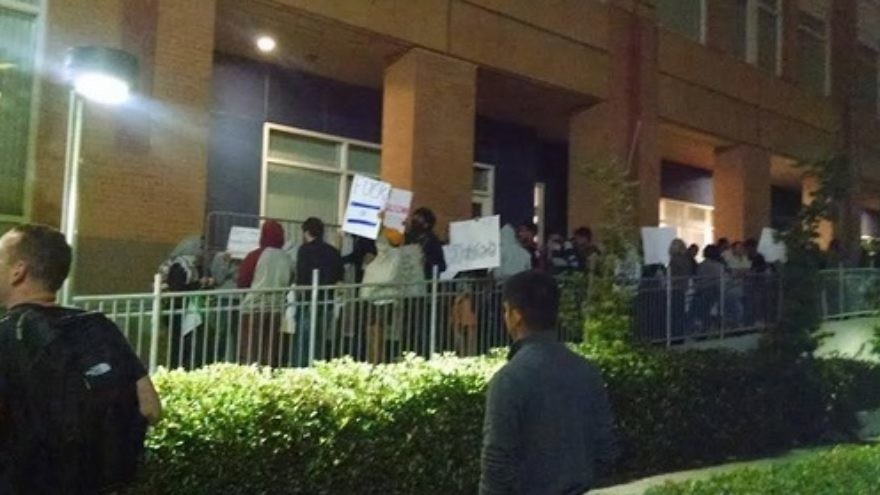 (May 23, 2016 / JNS) The night of May 18 was supposed to be an evening of learning and conversation for Eliana Kopley. The University of California, Irvine (UC Irvine) sophomore, who had just attended a lecture about the Holocaust and was walking a short distance to another campus building that was hosting a film screening about Israeli soldiers, found herself confronted by an angry mob.

“I was terrified. There is no other word to describe how I felt,” Kopley told the Haym Salomon Center.”

Kopley had intended to join 10 classmates and guests of the private event hosted by Students Supporting Israel. When she arrived, approximately 50 anti-Israel activists convened by Students for Justice in Palestine (SJP) were pounding on the doors and windows, and shouting violent chants targeting Israel, Jews, and the police.

With the angry mob physically barricading the entrance, the 20-year-old Kopley, who stands less than five feet tall, was forced to leave the scene amid taunts of “intifada, intifada—long live the intifada! F**k Israel and f**k the police.”

But Kopley was not alone. A group of female students accompanied her as she escaped to safety in a nearby building.

“When I turned back, at that moment, I looked at one of the girls and wanted to hide and cry,” Kopley said.

While the UC Irvine sophomore was hiding in darkness, the scene inside the movie screening was equally frightening.

Veteran Israel Defense Forces (IDF) soldier Eran Izak moved to the United States three years ago. The recently married construction worker was on hand May 18 to answer questions from the audience about his life in the IDF and the film “Beneath the Helmet.” What he experienced was something he never thought he’d see in America.

“As the film was playing we began hearing a lot of shouting outside,” said Izak. “It was immediately clear what was happening. The woman in charge of the event was literally holding the door closed with her hands as the mob tried to break into the classroom. As the shouting grew louder, it became apparent that we would not be allowed to leave, so we called campus security and the police.”

Meanwhile, the film was still playing even though nobody was paying attention by that point, as a sense of fear gripped the room.

“They were banging on the glass and the door and we could hear screaming outside,” Izak said. “The students had a look of panic on their faces—they were terrified. Finally the police arrived, pushed the protesters back a little, and escorted us to our cars.”

Izak added, “Before we left the classroom the police told us not to talk back to the protesters. I wanted to talk back and sing a song in Hebrew as an answer to their screaming about the intifada. But the police said, ‘Don’t say anything, don’t look at them and go straight to your car.’”

While he was grateful for the police protection, Izak was angry at the situation. He was mostly mad about how the students were intimidated—and he wondered where the First Amendment rights are for Jewish and pro-Israel students. Where is their right to peacefully assemble and their freedom of speech? The military veteran felt that the wrong people were escorted away from the scene.

“They can protest whatever they want, I understand that,” he said. “But don’t we have the same rights? Don’t the Jewish students have freedom of speech? I can’t believe this is happening in 2016 in America!”

Izak took direct aim at the protesters, noting that what happened May 18 “was not a peaceful protest.” He described the situation as an “ambush” by people not interested in any political change or peaceful resolution, claiming that “anyone with common sense knows this was nothing other than anti-Semitism from the people who spread lies about the IDF killing little kids or Jewish people drinking Palestinian blood.”

UC Irvine alum Sharon Shaoulian agreed with Izak’s perspective on the protesters’ motivation. The former president of Anteaters for Israel (the predecessor of Students Supporting Israel on the UC Irvine campus), Shaoulian had hoped to attend the screening and drop off supplies that she still had from her time with the pro-Israel student group, which ended with her graduation last December.

“When I arrived, they were screaming at the top of their lungs ‘intifada, intifada,’ banging on the windows, and I could see women—Jewish students who were desperately trying to keep the door closed from inside,” Shaoulian said.

Shaoulian sees the cries supporting the “intifada” as incitement to violence against Israelis. The usual chant by anti-Israel protesters, “From the river to the sea, Palestine will be free,” is commonly regarded as a call for ethnic cleansing. She also echoed Izak’s concerns about the First Amendment rights of Jewish and pro-Israel students.

“SJP and MSU (the Muslim Student Association) have a documented history of violence on this campus, specifically violence against Jewish students, myself a victim numerous times, [and my] friends victimized, and their history of sabotaging Jewish events and intimidating Jewish students,” Shaoulian said. “Although I am grateful the police were there to do something, the wrong students were escorted out.”

Shaoulian places much of the blame on Dr. Thomas Parham, UC Irvine’s vice chancellor for student affairs and past president of the National Association of Black Psychologists.

“He speaks out against any speech that can be borderline offensive to African-Americans, Hispanics, immigrants, women, and any other group. But every single year when Jewish students sit down with him, he gives the impression that what the protesters are doing is not anti-Semitic or hate speech, that they have a right to be there, and that he has an obligation and a desire to protect them,” explained Shaoulian. “Parham tells us every single year, ‘Look at their crowd, look how diverse they are ethnically, racially. What does that tell you? Who do you think is in the wrong here?’”

Shaoulian continued, “He says to us, ‘Look at their crowd, at their numbers, and their diversity. They are not all Muslim students. The protesters are black students, Hispanic students, Asian students—what does that tell you, Sharon?’ He said it this year, he said it last year and the year before last….It’s very clear where he stands on this issue and why he never makes any statement supporting Jewish students.”

In response to Shaoulian’s allegations, Parham said in a statement provided to the Haym Salomon Center, “My Student Affairs team and I constructively engage all students on campus—as individuals and as groups—and provide advice, consultation, and support on a range of issues. We are vocal in our reminders about civility whenever speech assaults someone’s humanity, ethnicity, gender, age, religious affiliation, physical ability or disability, or sexual orientation. Indeed, our chancellor issued a statement critical of the protest less than 24 hours after the Wednesday, May 18, incident.”

“I have never told students that support for Israel is wrong, and I strongly support the recent decision of the Regents of the University of California condemning anti-Semitism and anti-Semitic forms of anti-Zionism as types of discrimination,” added Parham. “Regarding [the May 18] protest, an investigation is in progress. Any disciplinary actions will be determined once the investigation is complete.”

—Shani Shahmoon contributed to this article.