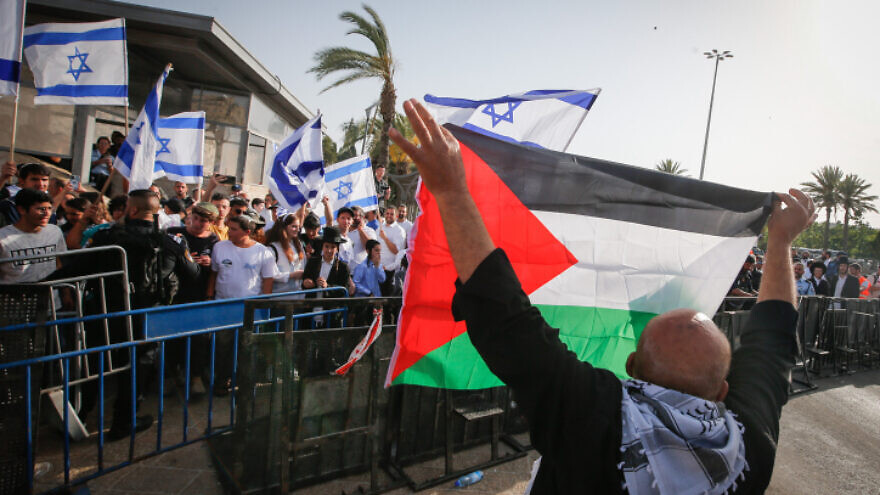 (May 30, 2022 / JNS) The president of Ben-Gurion University of the Negev told a Knesset committee on Sunday that if they wish to ban the display of Palestinian Authority flags on campus, then they should pass a law to outlaw the practice.

Appearing before the Knesset Education, Culture and Sports Committee, professor Daniel Chamovitz said that the government could not expect universities to ban pro-Palestinian rallies. The flying of P.A. flags, while troubling, he said, was not illegal.

“The Palestinian flag threatens many Jews. I understand and feel this pain—but that doesn’t mean there’s violence on campus,” said Chamovitz.

Last Monday, hundreds of Bedouin students flew P.A. flags during a demonstration on campus to mark “Nakba Day,” the Palestinian day of mourning over Israel’s establishment in 1948.

The demonstration sparked widespread criticism, including from Beersheva Mayor Reuven Danilovich, who called on Chamovitz to take action against students who participated, according to Ynet. Israeli Finance Minister Avigdor Lieberman called for the university’s funding to be cut over the incident, according to the report.

Likud Knesset member Eli Cohen submitted a bill to the Ministerial Committee for Legislation seeking to outlaw public displays of the flags of enemy states, as well as the P.A. flag, in state-funded institutions, including universities, according to Israel Hayom.

In an unusual move, the committee decided to present the bill for a free vote in the Knesset plenum on Wednesday, June 1, meaning all Knesset members will be allowed to vote with their consciences rather than adhere to their parties’ dictates, according to the report.

Chamovitz told the Knesset Committee on Sunday that this year, the university had been presented with requests from two student groups, on the left and the right, to hold demonstrations on campus.

“As a lesson from last year, and in order to prevent violence and injuries, we established a dialogue and reached understandings with the two groups, and the demonstrations ended an hour later without any displays of violence,” he said.

The issue of P.A. flags had not been discussed during this dialogue with the student groups, said Chamovitz.

“Once [the flags] were raised, we understood that this was lawful and that no action could be taken to remove them. We acted according to law and following an opinion from the Justice Ministry. If you think that the law recognizing the Palestinian flag should be changed—please do so. It’s not in our hands, although I and many others were troubled by this,” he added.

According to the committee’s legal adviser, Nira Lamay Rachlevsky, the mere act of flying a P.A. flag could not constitute an offense in and of itself, “since this is an authority with which the State of Israel has a diplomatic agreement.”

However, she said, when there was “real concern” that the flag indicated “identification or sympathy” with a terrorist organization, or when there was a high likelihood that flying it would lead to a “severe disruption” of public order, police must act.

“To the best of our knowledge, case law does not address specifically the case of raising the flag while chanting ‘With blood and fire we will redeem Palestine,'” she said.