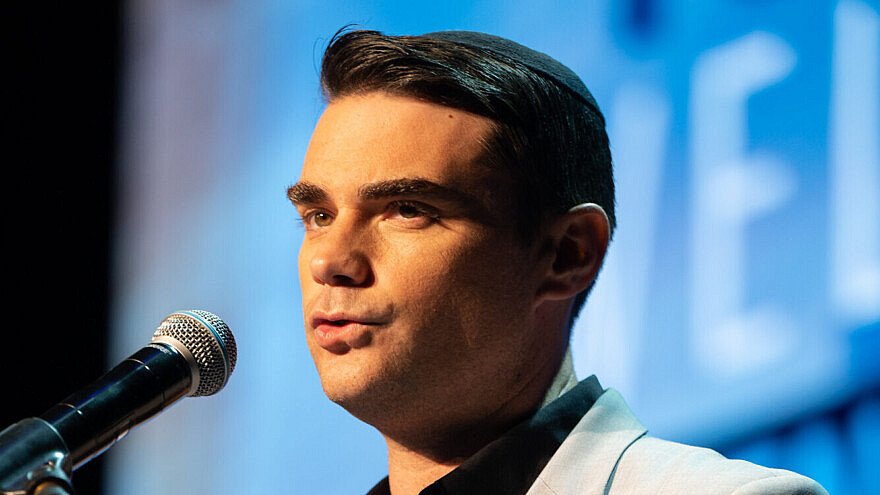 (July 21, 2022 / JNS) At his first-ever address in Israel on Wednesday evening, Ben Shapiro, the editor emeritus of The Daily Wire, made the case that Israel and the United States have a lot to learn from each other.

“Our countries have something profound and vital in common; they are both gifts from G-d, blessed by him, founded in liberty, consecrated to the idea that he is present in history and that he guides history towards his ends,” Shapiro told the 2,500 people who attended the first International Conservative Conference in Tel Aviv.

Having established this fundamental connection, Shapiro then turned to the differences between the countries and focused on the lessons they must learn from each other. In this respect, he contrasted the U.S.’s open marketplace with the relative restrictions on trade in the Jewish state, where he said taxes were higher and the unions were stronger.

“There is a reason, unfortunately, that a lot of people flee Israel to do business in the United States,” he said. “This needs to stop.”

When comparing the two nations’ bureaucracies and regulatory environments, Shapiro compared the differences between building a home or business in Florida, where he lives, and Israel.

“It might take a grand total of six to nine months to actually build a home in the state of Florida. To build in Israel, it takes years upon years. On average, according to the World Bank research of 2017, it took 15 procedures and 209 days just to deal with a construction permit in the State of Israel,” he said. “There is red tape, and then there is more red tape, and then there is still more red tape.”

Shapiro’s third point took aim at Israel’s unions, which he claims “must be broken.”

“Nearly a quarter of Israel’s workforce is unionized,” he said. While acknowledging that figure is down from the year 2000, when approximately 45% of the workforce was unionized, Shapiro noted that “work stoppages are commonplace, and the number of disputes and strikes and their cost are way above the OECD [Organization for Economic Cooperation and Development] average.”

Shapiro then lambasted the Israeli legal framework, taking particular issue with the Israeli Supreme Court, which he believes has extended its authority too far into the political system.

“The biggest problem is that an unelected bureaucracy seems to run an inordinate amount of policy in the State of Israel. That’s because while the United States has an independent judiciary selected by the executive branch and confirmed by the legislature, Israel has a self-selected judicial branch that acts as a merger of the executive and the legislative branches,” he said. “Thanks to the ‘Constitutional Revolution’ of 1992, the Israeli Supreme Court can now rule out of bounds perfectly legal acts of Knesset, leaving unelected, unaccountable oligarchs in charge of national policies in the name of a non-existent constitution.

“America’s governmental system is better than Israel’s and it’s not particularly close,” added Shapiro before insisting that the way Israeli Supreme Court justices are appointed should be similar to the process in the United States.

Nevertheless, Shapiro said his home country has a lot to learn from Israelis about nationhood.

“America has one major thing it can learn from Israel: that a nation-state must have, at its heart, a nation,” he said. “And what that really means is that America has to learn from Israel the necessity of common history, common culture and common destiny.

“America has spread freedom to more people than any nation in the history of the world,” he continued, “and spread prosperity to all corners of the globe. America has liberated hundreds of millions and fed billions. That is because America is the greatest country in world history. America has a special history and a special purpose.

“But here’s the thing,” Shapiro said, “America is forgetting that history and that purpose. In fact, that history and purpose are being purposefully undermined by people who despise what America stands for and who wish to substitute utopias of their own for [the] covenantal destiny America represents.”

Shapiro also pointed out that conservatives in the United States and Israel have many of the same adversaries. “It’s not a coincidence that those who oppose American exceptionalism also oppose Israel,” he said.

Following Shapiro’s speech, Israeli journalist Amit Segal asked him why he had not immigrated to Israel.

At a sold-out event in Tel Aviv, @benshapiro explains why he has not made Aliyah: pic.twitter.com/LJP8rx8bAR

The Q&A portion of the event began with one attendee asking: “How do you solve the Israeli-Palestinian conflict?”

Shapiro was also asked if he would run for president of the United States, to which he responded that he is content with his life and career and is not currently contemplating embarking on a grueling American presidential campaign that “sounds like hell.”