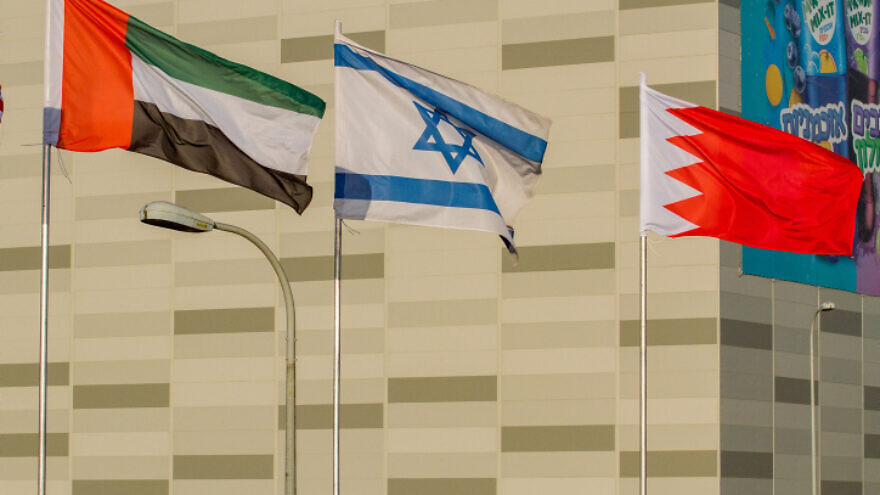 The flags of the United States, the United Arab Emirates, Israel and Bahrain seen on the side of a road in the city of Netanya on Sept. 14, 2020. Photo by Flash90.
Republish this article
824 WORDS
Spread the word.
Help JNS grow!
Share now:

(February 4, 2021 / JNS) The forthcoming decision by the Biden administration on whether or not to proceed with major weapons sales to Gulf states, signed by the previous Trump administration in the context of the Abraham Accords, form an important test of Washington’s commitment to the regional anti-Iranian alliance, an Israeli expert on U.S. policy in the Middle East has said.

Eytan Gilboa, professor of political science at Bar-Ilan University and a senior research associate at the Begin-Sadat Center for Strategic Studies, told JNS that the weapons deals should be examined through “a wider context of the radical elements in the Democratic Party, domestic economic and political factors, and a new American policy in the Middle East that primarily touches on negotiations with Iran.”

Gilboa stressed that three separate weapons deals need to be taken into account.

“There should be continuity between administrations on such sales,” said Gilboa. “It is not unusual for an incoming administration to review significant aspects of foreign-policy strategy, and weapons sales are, of course, a part of this.”

On the other hand, it is clear that this particular announcement is sending a message, argued Gilboa, since the Biden administration had ample time to conduct the review in question and has done so already. As a result, the announcement of a review should be seen as a signal of the administration’s reservations, according to Gilboa.

Reasons for this, including the Democratic Party’s emphasis on human rights, and pressure from the party’s progressive element, which have been heavily critical of the Gulf states’ environmental policies and human rights record, especially in their war in Yemen

“Those who call themselves progressives in the party consider the Gulf states as the most reactionary in the world. This is true especially for Saudi Arabia and the sheikhdoms in the Gulf,” said Gilboa. “After the murder of [Saudi dissident Jamal] Khashoggi, these elements applied pressure on Biden to cancel the deals. They want the deals frozen.”

He drew a distinction between the various deals, saying that the transaction with Sunni powerhouse Saudi Arabia is an especially sensitive issue in Washington due to “its alleged bombings of civilians in the civil war in Yemen. This is another dimension that is related to the progressive branch of the Democratic administration,” he said.

Yet such pressure is counteracted by strong domestic political and economic considerations. Lockheed Martin, the maker of the F-35, maintains a large production facility in Fort Worth, Texas, where the planes are assembled, and where large numbers of personnel are employed.

“That means that the 36 Congress representatives from Texas—13 of whom are Democrats—are not going to accept a cancellation of the UAE deal,” said Gilboa, “as this would undermine their own political base.”

‘This is not a foreign-aid issue’

From a regional strategic perspective, an American cancellation would constitute a serious blow to Washington’s commitment to the Sunni-Israeli alliance against Iran, and harm the U.S.’s own posture in the region, he cautioned.

“Obviously, Iran is a very significant part of the Abraham Accords. So canceling these deals would be tantamount to the Americans robbing themselves of a strong card against Iran,” said Gilboa.

The Department of State, responsible for coordinating American strategic interests, will lead the review.

Looking ahead, Gilboa assessed that it’s unlikely that the United States will block the F-35 deliveries to the UAE, although the number of jets could be reduced to a degree.

However, the deal with Saudi Arabia could face disruption, he noted, while the Morocco deal is also likely to go ahead.

“There are all types of forces at play. Everyone has an agenda and an interest. Eventually, I think it is going to be Biden who will make a final decision,” said Gilboa.

The administration can override Congress in the event that it objects to the deals, he added. “Congress has a loud voice on spending, but not on profits. This is not a foreign-aid issue. The Pentagon, too, is unlikely to block it.”

In the less likely scenario of America blocking the deals, this would constitute an early warning that Washington is on course to making a “terrible agreement” with Iran, cautioned Gilboa, saying “the administration’s ability to negotiate with Iran is already under doubt. It is showing eagerness, which shows inferiority. If there is no military option on the table, this, too, will harm negotiations.”

“Hence, the decision on the weapons deals forms a test, both for the U.S.’s conduct in the face of Iran, and for the solidification and expansion of the Israeli-Sunni strategic alliance,” he said. “If they block the F-35 deal, it would mean that they do not care about this strategic alliance.”