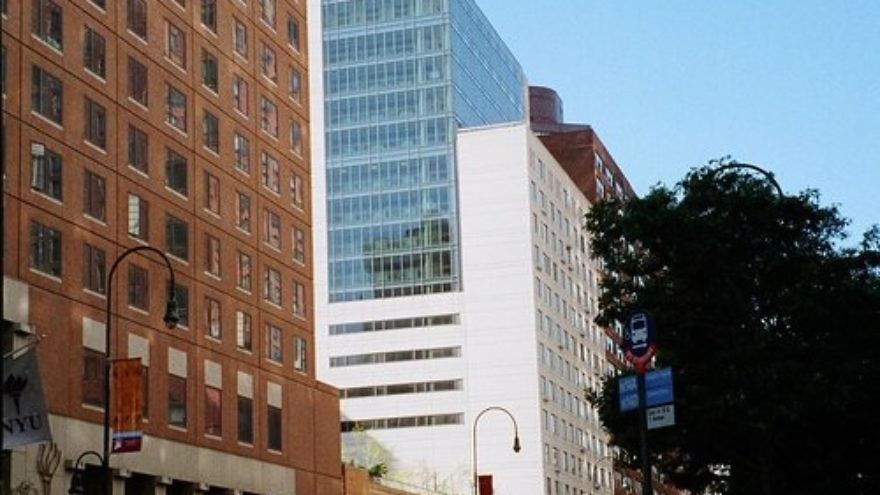 At left is Palladium Hall, a New York University dorm where many Jewish students live, and one of two NYU dorms that saw the posting of anti-Israel mock eviction notices in April. Credit: Eden, Janine and Jim via Wikimedia Commons.
Republish this article
1399 WORDS
Spread the word.
Help JNS grow!
Share now:

The latest anti-Israel trend to gain momentum on college campuses has been the distribution of mock eviction notices in dormitories by members of Students for Justice in Palestine (SJP). Whether or not the notices have specifically targeted Jewish students, experts say the tactic highlights the convergence of anti-Zionism and anti-Semitism on campus, creating a hostile environment for Jewish students.

Over the last two years, the mock eviction notices have appeared on at least a dozen campuses around the U.S., garnering the most attention at major East Coast schools including New York University (NYU), Northeastern University, and Harvard University.

The notices at NYU, slid under dorm room doors in April, falsely stated, “Palestinian homes are destroyed as part of the state of Israel’s ongoing attempts to ethnically cleanse the region of its Arab inhabitants and maintain an exclusively ‘Jewish’ character of the state.”

According to Tammi Rossman-Benjamin—a lecturer at the University of California, Santa Cruz and co-founder of the AMCHA Initiative, an organization addressing campus anti-Semitism across the U.S.—the notices are not a criticism intended to “improve Israel as a modern state” or “legitimate criticism about settlements, the Likud government, or any particular aspect of Israeli policy,” as defenders of the mock evictions may claim. Rather, she said the notices are a fundamental “delegitimization of the very notion of the existence of the Jewish state.”

“The intent of a [mock eviction] campaign, which is to demonize Israel and delegitimize the Jewish people’s indigenous right to self-determination in their homeland, is an action deeply rooted in hate and qualifies for the U.S. State Department’s definition for anti-Semitism,” Cohen told JNS.org.

But the more pressing issue, Cohen said, is how SJP “flagrantly violated the universities’ rules with unapproved flyering, and the intimidation of pro-Israel students and invasion of private space that went along with their disruptive actions.”

Harvey Silverglate, a civil liberties attorney in Boston and co-founder of the Foundation for Individual Rights in Education, told the Boston Globe in March that the eviction notices at Northeastern University “were obviously not meant to be taken as real eviction notices; they were political statements,” and that the regulations requiring permission for political speech “could, and should, readily be declared invalid under Massachusetts state law.”

But although the notices did state that they were not real, at Northeastern University the flyers were designed to look like legitimate eviction notices that “listed information about a ‘Municipal Court’ ordering the eviction, a case number, a warrant number, and an issue date; it also cited a building code within the explanation of the eviction,” Max Klapholz, a third-year student and co-president of the Huskies for Israel group, told JNS.org.

Northeastern administrators initially decided to ban SJP for at least one year for “a series of violations, which included vandalizing university property, disrupting another group’s event, failure to write a civility statement, and distributing flyers without permission,” according to the university, which eventually reinstated the group.

At the various schools, SJP distributed the notices to the dorms of Jewish and non-Jewish alike. At NYU, the anti-Israel group defended itself against the accusation of anti-Semitism by saying in a statement, “Racism is not limited to the practices of the Israeli government, and opposing policies and racist rhetoric, including anti-Semitism, is vital… This action addresses only one of the many horrific aspects of the occupation that Palestinians face daily.”

But AMCHA’s Rossman-Benjamin said the issue is less about whether the notices were intended to specifically target Jews, and more about how they impacted Jewish students.

First, the notices are being distributed at dorms and invading student privacy, she said. Second, said Rossman-Benjamin, is that “you can have a [mock] eviction notice at a Catholic university that has no Jewish students,” which, while still anti-Semitic, is “not influencing any Jewish students on campus and not creating a hostile environment for them.”

Students “felt unsafe on their campus” because of the notices, and in their aftermath worried “about just expressing their Jewishness on their campus,” she added.

AMCHA makes the case that at federally funded universities, Title VI of the 1964 Civil Rights Act—which prohibits discrimination on the grounds of race, color or national origin by federally funded programs—can apply on college campuses if a group is being singled out with harassment, intimidation, or by otherwise negatively impacting students’ rights to a normal academic experience.

This kind of harassment is evident, Brett Cohen said, not only in the mock eviction cases but also in other SJP anti-Israel protests and incidents on campuses, such as the recent University of California, Los Angeles student government elections, in which SJP asked candidates to sign a pledge that they would not take educational trips to Israel.

Laura Adkins, a pro-Israel NYU student activist wrote an op-ed about the mock eviction notices on her campus for the Times of Israel, told JNS.org that while opinions remain divided on whether Jewish students were specifically targeted by the notices, she believes they were in fact targeted, especially because the flyers used the term “Judaization.”

“Additionally, one of the two dorms, the Palladium, is well-known to be a dorm that lots of Jewish students choose, in no small part due to the presence of a Shabbat elevator (which automatically stops on each floor so that Shabbat-observant students don’t need to press a button),” she said.

Though the university contested this by saying the elevator exists because of a stairway that exits to the street and cannot be accessed through the lobby behind the security desk, the wall next to the elevator has a plaque written by NYU’s Rabbi Yehuda Sarna.

Rayna Rose Exelbird, the StandWithUs Emerson fellow at Florida Atlantic University and the current social media manager for Howls for Israel on her campus, told JNS.org that when SJP members distributed mock evictions at her campus in 2012, she felt targeted given her experience as an Israel advocate.

Although non-Jewish students also found the notices posted on their doors, “it definitely wasn’t a coincidence that my door was included in their activities,” she said, adding that she could not find any other notices posted on doors on her floor.

The Claremont McKenna College cafeteria was the site of a 2013 incident in which an Israeli professor tried to get SJP activists to move a protest away from the entrance, so that students would not be blocked from entering and forced to participate in a protest against their own interests. The professor got into altercation with an SJP student, calling him a “little cockroach,” which led to an accusation of racism against Arab students. The professor, however, denied the accusation and said he was provoked.

In the wake of that incident, mock eviction notices appeared at the Claremont Colleges. The Office of Students Affairs at one of the consortium’s schools, Pitzer College, “did respond swiftly and called for the fake eviction notices to be taken down, highlighting the violation in policy,” said Elliott Hamilton, a rising senior at Pitzer, co-president of Claremont Students for Israel, and a founding member of the Alpha Epsilon Pi fraternity chapter at the Claremont Colleges.

But while the administration “did a good job of getting the flyers taken down, they did not openly condemn the students of SJP for violating college policy,” Hamilton told JNS.org.

While Hamilton does not believe SJP specifically targeted Jewish students at the Claremont Colleges, he said that “did not stop Jewish students from feeling targeted, hated, and vilified.”

Kenneth L. Marcus, president & general counsel of the Louis D. Brandeis Center for Human Rights Under Law and former staff director of the U.S. Commission on Civil Rights, told JNS.org that university leaders “must ban these eviction notices if they enforce their policies on flyers against any other group.” Those leaders, he said, should also “take these eviction notices as a teachable moment to explain that hostility to Israel often crosses the line into anti-Semitism.”