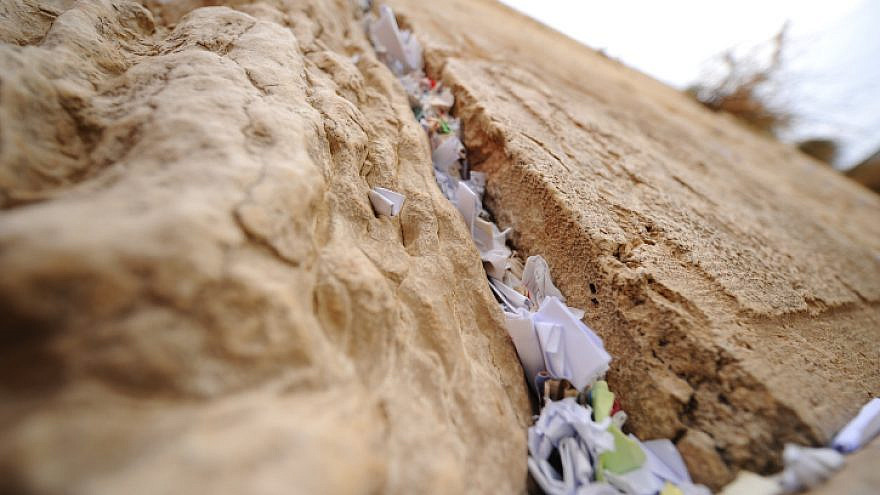 Handwritten notes placed between the ancient stones of the Western Wall in the Old City of Jerusalem, Nov. 14, 2018. Photo by Mendy Hechtman/Flash90.
Spread the word.
Help JNS grow!
Share now:

(March 17, 2021 / Israel Hayom) Workers at the Western Wall (Kotel) in Jerusalem on Tuesday conducted the site’s customary biannual clear-out of all the notes stuck between the stones over the course of the previous six months.

The notes are traditionally collected before Passover, which this year begins after Shabbat on the evening of March 27, and on Rosh Hashanah. Mindful of public-health regulations, workers wore gloves, masks and used disposable wooden sticks to remove the notes. These will be buried on the Mount of Olives, along with holy materials that are deemed too worn-out for use.

Rabbi of the Western Wall Shmuel Rabinowitz oversaw the ceremonial clear-out and recited a prayer for the burial of the notes.

According to the Western Wall Heritage Foundation, the COVID-19 pandemic has led to a spike in the number of notes e-mailed to the Kotel by Jews all over the world. Since Passover 2020, more than 71,000 such notes have been e-mailed to the foundation, many times more than prior to the coronavirus crisis.

The countries from which most of the notes hailed were the United States, Brazil, France, Canada, Germany, Spain, Poland, Argentina and Mexico, as well as the Lapland region of Finland.

The Western Wall Heritage Foundation also said that it is preparing for Passover prayers, including the traditional Priestly Blessing, which normally draws tens of thousands of worshippers. Last year, only 10 kohanim (Jewish high priests) were allowed at the Western Wall.

This year, the prayers will be held in accordance with Health Ministry directives, which, as of March 17, allow for public prayer in capsules. They will also be livestreamed for the sake of those unable to participate.