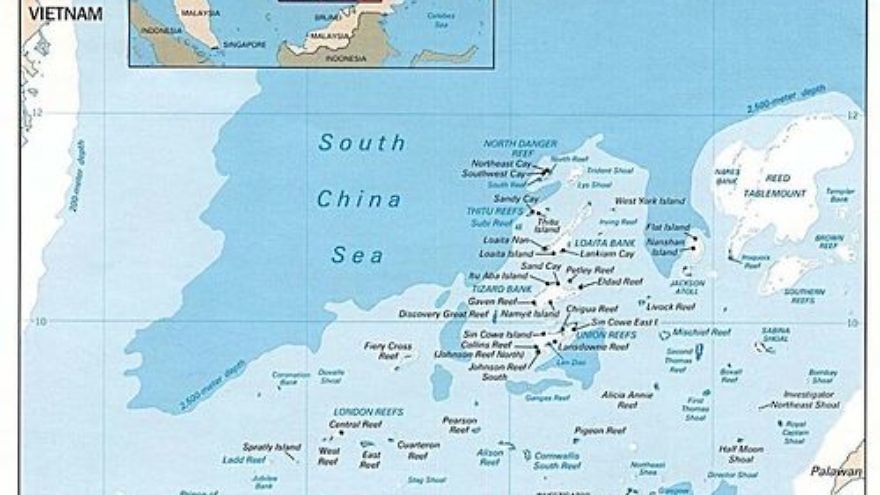 Could satellite photos of a tiny island in the South China Sea affect the debate over creating a Palestinian state?

The photos, released earlier this week by the Center for Strategic and International Studies (CSIS), show that China is building military aircraft hangars on the disputed Spratly Islands. That violates a promise China’s president, Xi Jinping, made to President Barack Obama less than a year ago, that “China does not intend to pursue militarization” of the islands.

Moreover, a United Nations tribunal ruled last month that China’s claim to the Spratly Islands and other nearby territories is “unlawful.” Yet the international community has taken no action against either the illegal Chinese occupation or China’s militarization steps.

Israeli policymakers might want to keep an eye on these developments. Israel’s leaders have said any future Palestinian state would have to be completely demilitarized. But can Israel rely on the international community to enforce the demilitarization rules if the Palestinians violate them?

Perhaps the most infamous experiment in demilitarization involved the Rhineland, an area of western Germany along the border with France, Belgium and Holland. The 1925 Locarno Pact, signed in the aftermath of World War I, required that the Rhineland be permanently demilitarized. But when Hitler sent his troops to occupy the Rhineland in March 1936, the Locarno signatories–Britain, France and Italy–stood idly by.

Pacifist sentiment was strong in England; treaty or no treaty, the Brits were in no mood to confront the Nazis. Lord Lothian, the veteran British diplomat, rationalized the militarization of the Rhineland as “no more than the Germans walking into their own backyard.” The French, who now found themselves within shooting distance of the Wehrmacht, were not quite so sanguine about the latest developments. But with France mired in economic troubles and national elections just months away, French Prime Minister Albert Sarraut was unwilling to risk a costly conflict with Hitler.

The United States was not a party to the Locarno agreement, but what President Franklin Roosevelt said mattered in the world arena. In this case, he didn’t say much. Determined to maintain friendly relations with Germany, FDR refrained from explicitly condemning Hitler’s Rhineland action. He would not even send U.S. observers to a League of Nations discussion of German aggression. Shortly after the Rhineland crisis erupted, Roosevelt headed off for a two-week fishing trip in the Bahamas, which coincidentally helped him evade questions about the controversy.

Israelis don’t need to go back to the 1930s for examples of how the world might respond if a Palestinian state began importing tanks or missiles. They have had some bitter experience in this area in recent decades.

The late Israeli diplomat and politician Abba Eban describes in his autobiography how the Nixon administration pressured Israel to accept a ceasefire in the 1970 War of Attrition, promising that Egypt would not be allowed to move its missiles close to the Suez Canal. “Within a few days of the conclusion of the cease-fire agreement,” Eban writes, “our head of military intelligence…was reporting…the Egyptians had begun to move their missiles forward as soon as the ink was dry on the agreement.” Nixon’s response “was evasive,” Eban charitably recalled. The U.S. administration “professed not to know that the violations were taking place.” No action was taken against the Egyptians.

An even more current example presents itself. The United Nations Interim Force in Lebanon (UNIFIL), which consists of 10,506 soldiers (and 848 civilian advisers) is pledged to ensure that southern Lebanon is kept “free of any armed personnel, assets and weapons other than those of the Government of Lebanon and of UNIFIL deployed in this area.” That commitment from the international community is supposed to protect Israel’s northern border. Yet Hezbollah has stationed more than 100,000 missiles in that area, according to Israeli military estimates. The missiles are aimed at Israel. And UNIFIL refrains from intervening.

All of which leaves some Israelis wondering how international promises would fare if a demilitarized Palestinian state decided to remilitarize. When push comes to shove, would world leaders decide, as FDR did, to go fishing?

Dr. Rafael Medoff is author or editor of 16 books about Jewish history, including The Historical Dictionary of Zionism (with Chaim I. Waxman).