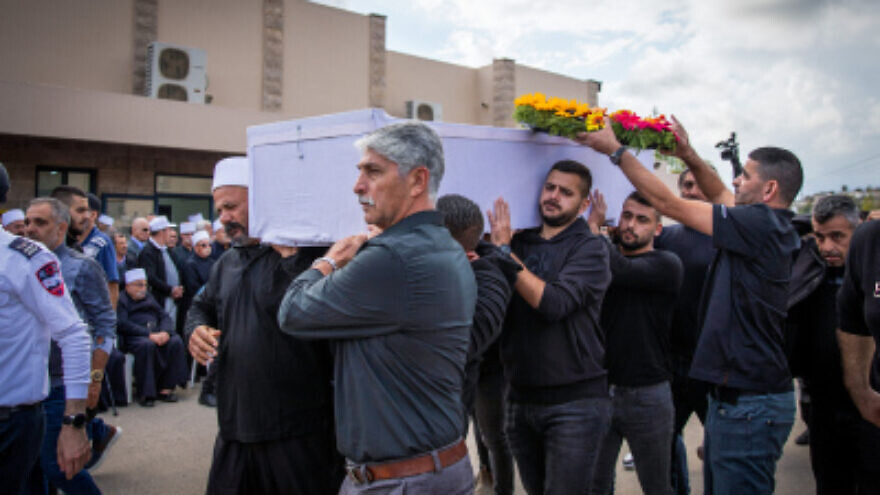 Mourners participate in the funeral procession of Tiran Fero, an Israeli teenager whose body was snatched from a hospital in Jenin by Palestinian terrorists and returned to Israel on Nov. 24, in Daliyat al-Karmel, near Haifa, Nov. 24, 2022. Photo by Shir Torem/Flash90.
Spread the word.
Help JNS grow!
Share now:

(December 5, 2022 / JNS) Israeli Druze used tribal warfare tactics to achieve the return of the body of a youth from Palestinian body snatchers in Samaria last month, a divergence from the blueprint long followed by the Israeli government to free captive soldiers and the remains of slain Israelis.

“I was near Jenin sending messages to Palestinian contacts in the city that if anything happens and the body is not returned, it could become a massive problem for Palestinians in our area,” Druze former minister of communication and Likud lawmaker Ayoub Kara told JNS.

Kara argued that the threats against the Palestinians were crucial to the speedy release of the body.

In November, Palestinians seized Tiran Fero’s body from a Jenin hospital. Fero, 18, from Daliyat el-Karmel near Haifa, was mortally injured in a traffic accident while in the Jenin to repair his vehicle. After some 30 hours, his body was returned following efforts by Israeli security forces and in coordination with Palestinian Authority, according to the Israeli military.

“The Druze youth protesting in the streets and obstructing roads delivered a message to the Palestinians that we, too, could kill Palestinians in our cities. Palestinians believe Jews are naive, but Druze are citizens of the state and are not naive,” he said.

In an incident reported last month, three Druze soldiers from the Israel Defense Forces’ Armored Corps were arrested on suspicion of hurling improvised explosive devices at a Palestinian home in a village near Bethlehem.

In a statement, the IDF Spokesperson’s Unit said at the time that “a number of IDF soldiers were apprehended.”

Indeed, many observers attribute the release of Fero’s body less to efforts by the government to negotiate a solution than to the hard-nosed Druze tactics.

Family and tribal solidarity are critical values in Arab society, along with the quick resort to violence to protect the group’s honor, analysts told JNS. Families, clans and tribes protect their members from attack by other groups in a form of collective responsibility, where an attack on one member of a group is considered an attack on all of them.

In this way, the attack by Arab Palestinians on the Druze youth caused the mobilization of the Druze population to protect the kidnapped youth’s body. Tribal tradition dictates that the victim’s group is allowed to take revenge on any member of the killer’s tribal group, which manifested itself as reports of violence or threatened violence by Druze against Palestinian Arabs.

Kara said that this situation “brought the leaders of the Druze nation together for the first time in a long time, and we tried hard to find a solution.

“I pressed Gulf and Arab states, and some leaders met with the Palestinian Authority while others pressed Israel’s government to find a solution,” he continued.

There were diplomatic efforts and the government tried various avenues, but in the end, “only the Druze nation could do it since we have a relationship with all the relevant players and knew how to push them,” said Kara.

The Palestinian Authority did not like the publicity as it “made them look terrible,” he added. So, the Druze pushed all sides to find a solution. “Finally, a combination of the pressures got the result,” said Kara.

Asked whether this provides an example of how Israel should act in hostage situations or when Palestinian terrorists are holding onto the bodies of Israelis, Kara replied that it is critical to respond immediately with the threat of overwhelming force.

“If the response is quick and decisive, then the Israeli soldier or civilian has a much better chance of being released before they [the terrorists] have time to escape and hide,” he argued.

Kara summarized, “The problem is that most Israeli leaders…do not live in the Middle East reality, which is very problematic for anyone who is not Muslim.”

Harold Rhode, a longtime former adviser on Islamic affairs in the U.S. Department of Defense, said that Kara is correct in that “the immediate response is absolutely essential.”

Rhode added, “The Druze grow up among Muslims and know how to deal with them. We can learn a lot from them.”