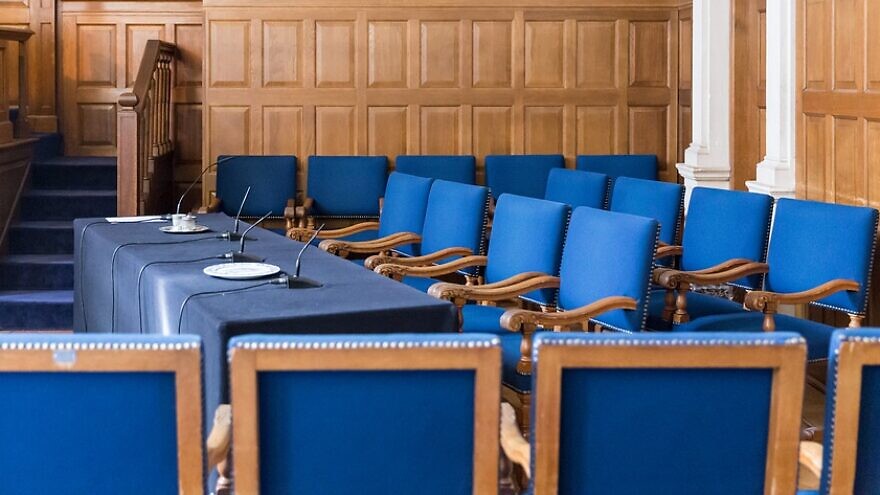 (April 27, 2022 / JNS) A group of 18 constitutional- and business-law professors from across the political spectrum joined together to sign onto a friend of the court brief filed last week with the U.S. Court of Appeals for the 5th Circuit, which is reviewing an appeal to the challenge to Texas’s anti-BDS law.

The effort is being led by Eugene Kontorovich, a professor of law and the director of the Center for Middle East and International Law (CMEIL) at the Antonin Scalia Law School at George Mason University, who is widely regarded as the “intellectual architect” of anti-BDS laws. Other prominent signatories are attorney Alan Dershowitz, a longtime Harvard Law School professor, and New York University School of Law professor Richard Epstein. Of counsel for the amicus brief was CMEIL fellow, attorney Jerome Marcus, who served as an attorney for former President Donald Trump.

The brief argues that anti-BDS laws like the one being challenged in Texas, as well as the 35 other states with similar laws, recognize that “refusing to do business with people because of their connections to the Jewish state, rather than their individual conduct, can be a form of anti-Semitism,” according to a news release.

When BDS actions are undertaken by state contractors, it robs the state’s “residents from the benefit of having what might be the most cost-effective and innovative products and services employed by those who work on their behalf,” the release stated, adding that none of the laws ban boycotts by individual businesses, but only prevent them from being subsidized with taxpayer dollars through government contracts.

The court is currently reviewing an appeal by Texas Attorney General Ken Paxton after a section of the state’s anti-BDS laws was ruled unconstitutional by a federal district court judge in January, placing a preliminary injunction on the entire law.

In the amicus brief, the law professors argued that since the right of companies and individuals affiliated with those companies to support BDS was not prohibited—only prevented from doing business with governments with anti-BDS laws—First Amendment, free-speech rights are not violated by the law. The brief cited numerous examples where federal and state laws prevent private businesses from discriminating based on race, gender, national origin, sexual identity, sexual preference and familial status.

“If a company wants to discriminate against people or businesses simply because they have some connection to Israel, that company is completely free to do that. However, that company isn’t going to enjoy the benefit of doing business with the state, or the state doesn’t need to do business with a company that engages in this kind of discrimination,” Kontorovich told JNS. “Because boycott and discrimination are just different ways of saying the same thing, and you can engage in all sorts of discrimination legally, but you don’t have the right to have it subsidized by the taxpayer.”

Economic sanctions against companies from countries such as Russia and Iran would also be called into question if the district court’s ruling stands.

“And remember, too, that the BDS movements don’t oppose Muslims who live in Israel. They distinguish between Jews and Muslims,” he added. “And so I fully support the efforts so long as it doesn’t interfere with advocacy.”

The anti-BDS law was challenged in court by the Houston-based A&R Engineering and Testing Co., which, when its contract with the city of Houston was up for renewal, was asked to certify that it does not and will not boycott Israel.

The owner of the company, Rasmy Hassouna, testified that he is not anti-Semitic, though he is a proponent of the BDS movement.

The Council on American-Islamic Relations (CAIR) and the American Civil Liberties Union (ACLU) are backing Hassouna against Texas’s law, arguing that it violates his First Amendment rights.

Kontorovich called this criticism of the law completely baseless, saying that such laws have been ruled constitutional under unanimous Supreme Court precedent and as indicated by the ideological diversity of the professors who signed onto the amicus brief.

“This is not only clearly constitutional, but most importantly, if the anti-BDS law were to be held unconstitutional, it would call into question anti-discrimination law of any kind, foreign-sanctions law and just a wide variety of measures,” said Kontorovich.

“It’s a sign of the extent to which the demonization of Israel has become central in progressive circles that progressive organizations are willing to risk undermining the legal basis behind anti-discrimination laws just to make a case to discriminate against people because of their relationship to Israel,” he said.

Other organizations, such as the Louis D. Brandeis Center for Human Rights Under Law and Hadassah, the Women’s Zionist Organization of America, also filed a joint amicus brief in support of the anti-BDS law.