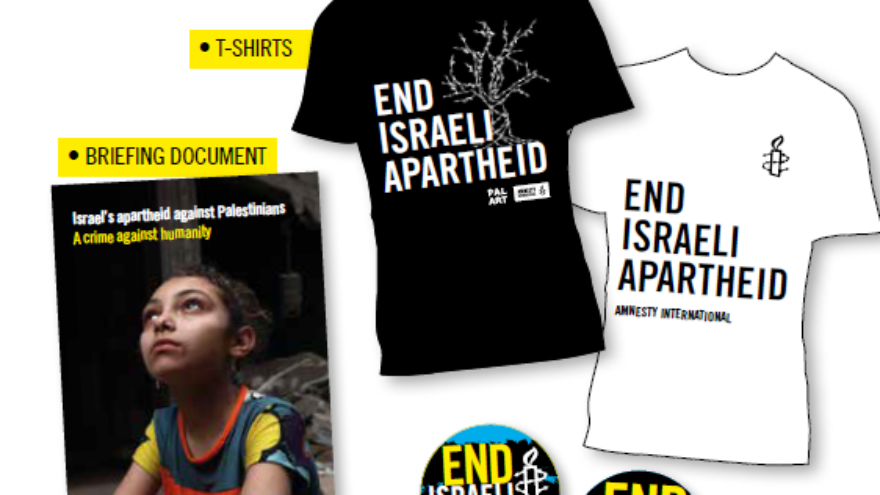 (July 12, 2022 / JNS) The Simon Wiesenthal Center has blasted the NGO Amnesty International UK for releasing a new collection of anti-Israel merchandise to be sold on its website.

Kristyan Benedict, Amnesty International UK’s campaign manager for Israel/Palestine and Syria, made the announcement about the new products Monday on Twitter. The merchandise includes T-shirts, placards, a briefing document and stickers, all of which feature the slogan “End Israeli Apartheid,” with “more coming soon,” according to Benedict.

The briefing document says, “Israel’s apartheid against Palestinians” is “a crime against humanity.”

He added, “Amnesty accuses Israel as guilty of crimes against humanity for the crime of existing. In fact, it is Amnesty whose behavior borders on the criminal by knowingly and willfully playing a central role in the international campaign to cast the Jewish state as an illegitimate state.”

The Israel Advocacy Movement called Amnesty International “shameless” on Twitter for releasing such products and further criticized them for “profiting from anti-Zionism.” StopAntisemitism.org said the NGO is “truly pathetic” for “resorting to selling merch[andise] falsely libeling the world’s only Jewish nation.”

Benedict told The Jerusalem Post on Monday that Amnesty International expects the merchandise to be “popular.”

He said that “the first set of T-shirts will be available in the coming days with more in development in partnership with Palestinian artists.”