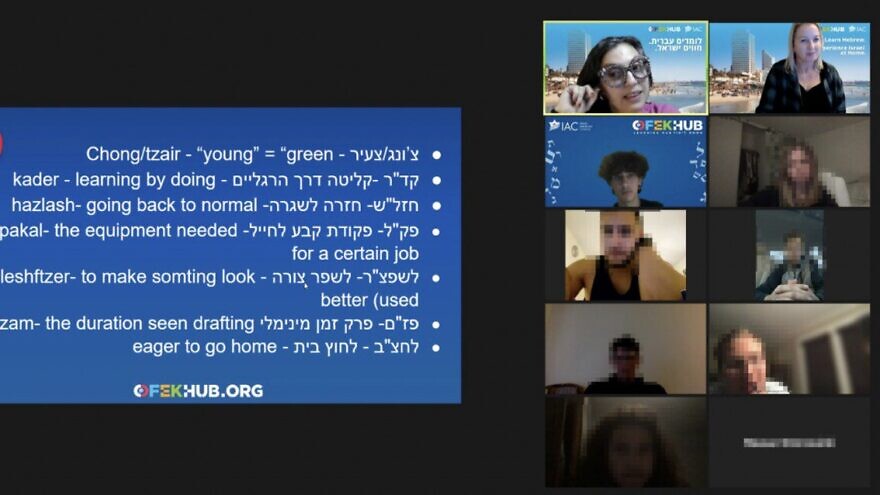 (December 23, 2022 / JNS) Since the COVID-19 pandemic, the Israeli-American Council (IAC) has been growing an innovative online learning program, the OFEK Hub, to teach Hebrew language, Israeli culture, Jewish history and Holocaust education to interested students of all ages around the globe. Now the program is expanding to prepare Jewish Americans who are joining the Israel Defense Forces (IDF) to understand the unique slang spoken by soldiers.

Some of the terms being taught to young American recruits include “chong/tzair;” meaning “young” or “green;” “kader,” referring to learning by doing; “hazlash,” equating to “going back to normal;” “pakal,” referencing the equipment needed for a specific task; and “leshftzer,” meaning to make something look better.

OFEK also teaches more general slang used throughout Israel, like “sababa,” one of the most commonly used words in Hebrew which means, “cool, great.” Sometimes it’s also pronounced “sababi” or “sababush,” since as OFEK explains, “Israelis like to add ‘ush’ to the end of everything.” Another useful term is “stam,” which translates as, “Just kidding, nothing, no specific reason, just ’cuz, whatever.” OFEK instructs that stam is a good word to use “anytime you forget what you’re trying to say.”

The equivalent of “dude” in Israel is “achi,” and teachers recommend using it as a greeting for people whose name one does not know. To dismiss something as ridiculous, say “shtuyot bamitz,” which literally translates as “nonsense in juice.”

One of the most confusing Hebrew phrases is “chavlaz,” which is an acronym for “chaval al hazman.” The literal translation makes no sense: “Shame on the time.” OFEK explains that it is “actually a positive phrase, meaning anything that was completely worthwhile, totally awesome.”

Sharona Israeli-Roth, vice president of online education for IAC, told JNS that OFEK’s goal is “making sure that everyone anywhere will be able to afford and experience Hebrew education, Jewish education in their household.” She noted that since IAC is a nonprofit, it can offer Hebrew language education for a third of the price of most traditional Hebrew programs. She noted that participating students come from not only across the U.S., but also Europe, Australia and even Japan.

Israeli-Roth emphasized that the OFEK program offers much more than just learning Hebrew, but also a gateway to a whole network of like-minded learners. She said, “We have more than 60 teachers at OFEK. We have many hosts that are hosting our classes. We are not just teaching…we are also creating a community. That is even more important. When you take a course at OFEK you are becoming part of the IAC community, and we have 20 chapters in the U.S., so you are able to connect with the local chapters and do a lot of incredible events and join a lot of different opportunities.”

Schaffer described how the program for IDF recruits goes beyond teaching the slang to providing an entire overview of Israeli culture.

“It was not only the slang, it was culture, it was Israeliness, it was how to order food in Israel, Israeli songs that we talked about and much much more,” she said. “[There’s] the difference in the culture. There’s a culture shock when you come to Israel. Israelis speak directly. So we put an emphasis on what to expect so they have a softer landing and not like a total shock…We give them the bad, good and ugly.”

“We’re really able to reach a variety of groups, from people who are Israeli American, American Jews, people that just love Israel and want to learn about Israel and Hebrew,” Israeli-Roth said. “We have students from 6 years old, and our oldest student just celebrated his hundredth birthday.”

“Our students, our kids in the U.S., are not getting the knowledge that they should get about the Holocaust, antisemitism or their Jewishness, or the Israeli culture many times,” she said. “And we are here to give that and to make it accessible. We’re really proud of the program. I’m telling you that as an educator, I have never dreamt in my life that we could build and create something like this. This is more than a dream.”