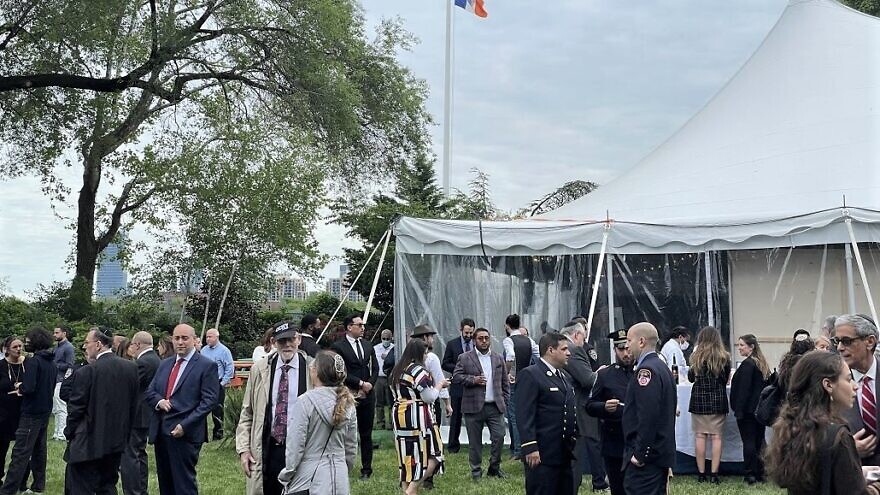 (May 31, 2022 / JNS) “I was ready for just about anything when I came to an Eric Adams party, but a Chassidic guy singing Billy Joel was not one of them.”

The May 24 gathering at the mayor’s Gracie Mansion residence drew a mix of politicians, religious leaders, New York Jewish movers and shakers, and seemingly every New York police officer with Jewish ties.

The festivities were largely centered on the relationship between Adams and New York Jewry—a relationship going back to Adams’s time on the police force, through his Brooklyn borough presidency and on to his run as mayor, during which he courted and relied heavily upon endorsements and votes from the Jewish community. He has previously hosted Jewish Heritage celebrations as borough president and during his time as a state senator representing the neighborhood of Crown Heights, home of the Chabad-Lubavitch movement.

Many of the evening’s speakers, which included New York Police Commissioner Keechant Sewell, a number of City Council members, Rep. Carolyn Maloney (D-N.Y.) and Israeli Consul General in New York Asaf Zamir, made note of the troubling rise of anti-Semitic violence and rhetoric in the city while placing faith in the hands of Adams that he will find a way to fix the growing problem.

“People say that Eric Adams is a friend of the Jewish community. He is your family. He will never let you down. He will always have your back. He will keep you safe. If anyone is going to stamp out anti-Semitism, it is this man right here and his public-safety mission,” said James Gennaro, City Councilmember for the 24th District, which includes Queens. “I am with him 100%.”

“Here’s always been there for us, and we are going to be here for him,” said City Council and Jewish Caucus member Ari Kagan, a Belarussian immigrant representing the 47th District in areas of Brooklyn.

Zamir, still relatively new in his position and who just last week took a tour of Crown Heights, extolled the New York Jewish community, telling those gathered that they have provided him with a learning experience and a pleasant surprise.

Zamir also acknowledged the city’s struggle with Jew-hatred while sounding a hopeful note.

“Even though it’s not the easiest of times and even though anti-Semitic incidents in this city have quadrupled in the last year, everyone here knows we’ve been through worse and we’ve always won, and we’ll win this together. But we can’t do it alone, and gladly, we have a lot of help and primarily from the city, from the mayor’s office,” he said. “And on top of that, from a mayor who I am happy to say and proud to say is an amazing friend to the Jewish community, an amazing friend to Israel.” 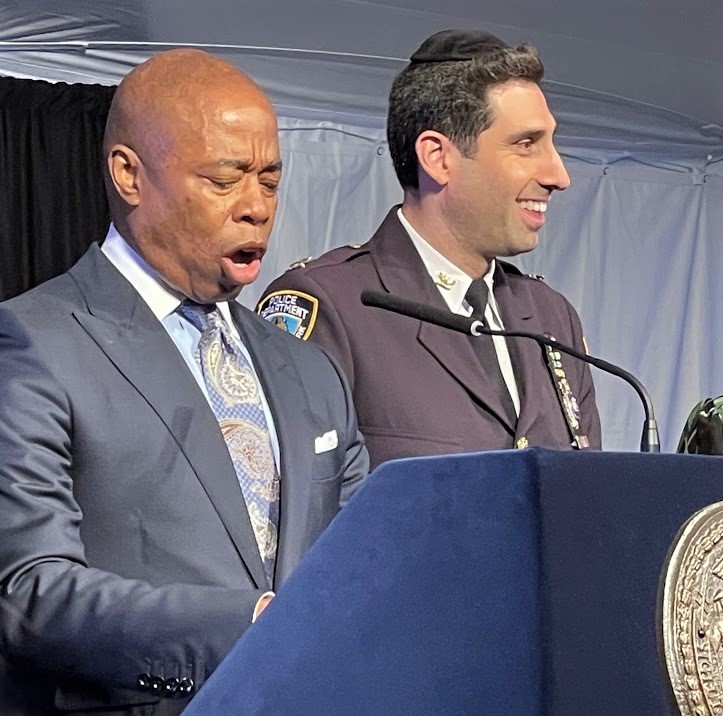 ‘Stamp out hate in every form across this city’

The event also featured a performance from celebrated Chassidic singer Shulem Lemmer, a Brooklyn native who belted out Frank Sinatra’s “(Theme From) New York, New York,” along with a traditional Hebrew song, finishing with a schmaltzy version of Billy Joel’s “Piano Man.”

It was a tough act for Restler, who represents the Satmars and other members of Williamsburg’s Jewish community on the City Council, to follow.

“We have experienced a horrible uptick of violence across the five boroughs, but it has been concentrated against the Orthodox community,” said Restler, a Jewish Caucus member. “We need to stamp out hate in every form across this city. We can build goodwill, tolerance and understanding across the diversity of our communities. We can fight back against this uptick of hate and violence.”

Inna Vernikov, a Jewish Ukrainian immigrant representing parts of Brooklyn on the City Council and the Jewish Caucus, noted she is one of just five Republicans on the City Council, though partisan politics was not getting in the way of Adams’ resolve to help reduce anti-Semitic incidents in the city.

“While we have a rise in anti-Semitism, I am incredibly grateful to have a mayor who stands with the Jewish people, who stands with Israel, who is here to support our community,” she said. “I know I can rely on him for help with anything I need.” 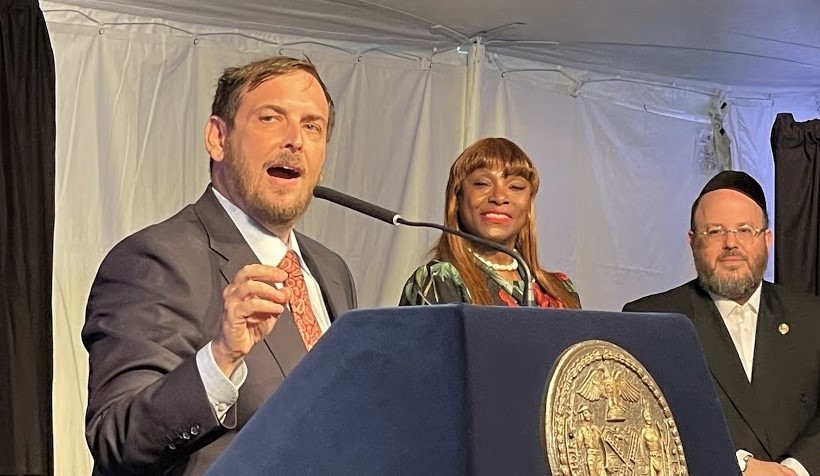 From left: Israeli Consul General to New York Asaf Zamir addresses the crowd gathered for of Jewish American Heritage Month at Gracie Mansion next to Ingrid Lewis-Martin, chief adviser to Mayor Eric Adams, and senior adviser to the mayor Joel Eisdorfer on May 24, 2022. Photo by Mike Wagenheim.
Republish this article in your newspaper or website