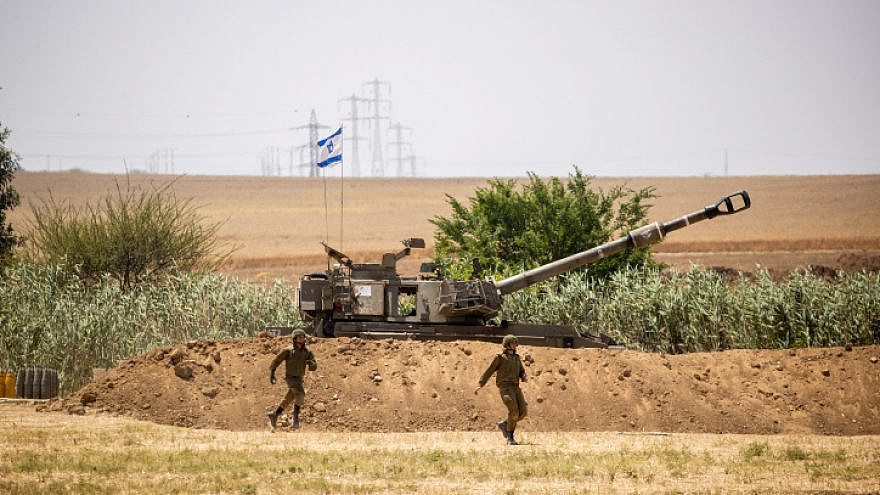 (May 20, 2021 / JNS) As multiple media reports of a ceasefire taking effect on Friday surfaced on Thursday, Hamas and Palestinian Islamic Jihad continued to fire on southern Israeli cities, towns and villages throughout the day, while the Israeli Air Force struck targets it detected in real time.

As of 7 p.m. Israeli time on Thursday, Gaza’s terror factions had fired 4,340 rockets towards the Jewish state since May 10, stated the Israel Defense Forces, with 640 of those failed launches that fell inside the Gaza Strip itself.

The IDF struck more than 1,000 military targets throughout the coastal enclave since the barrage of rockets started last Monday.

Hours after a Hamas anti-tank cell fired on and struck an Israeli bus near the Gaza border, lightly injuring a soldier with shrapnel, the IDF said that its air and ground forces struck an anti-tank missile post in Beit Lahiya in northern Gaza.

“The post that was struck appears to have been the one that had fired at an Israeli bus this morning,” stated the IDF.

In addition, a short while ago, an IDF aircraft thwarted a potential attack by armed Hamas anti-tank missile operatives while they were driving in the northern Gaza Strip.

The IAF targeted 30 rocket-launching posts in Gaza located above and below ground, several of which “were armed and aimed at Israeli communities,” according to the military. The IDF also conducted a number of strikes on terrorist operatives who were in the process of launching rockets at Israel.

In recent days, the IDF hit around 430 Hamas and Palestinian Islamic Jihad rocket-launchers, and more than 20 rocket-launching operatives, said IDF figures, resulting in a degradation of the capabilities of the terror organizations.

‘Hamas has been hit in a significant manner’

Israeli Prime Minister Benjamin Netanyahu called a meeting of the security-diplomatic cabinet to discuss a unilateral truce, according to Channel 22.

The cabinet reportedly examined a recommendation to accept an Egyptian truce proposal based on the assessment that the military achievements of the IDF’s operations are major, and that Israeli deterrence had been restored.

Earlier on Thursday, heavy rocket barrages set off alarms in the Gaza border communities of Ashkelon, Ashdod and as far as Beersheva to the east. Two rockets scored a direct hit on a factory there, causing light to medium injuries to a 32-year-old man, who was evacuated to a local hospital.

The head of Hamas’s overseas bureau, Khaled Mashal, said in a statement that “it is true that we fired the rockets, but the Zionist enemy began the aggression against the Al-Aqsa mosque,” Channel 22 reported. “[The Hamas military wing commander] Muhammad Def warned the Zionists not to play with fire at Al-Aqsa and Sheikh Jarah, but they did not listen to him.”

In his statement, Mashal claimed that Hamas was able to send “the message” to Israel that Jerusalem and the Al-Aqsa Mosque “are red lines,” and that “the campaign moved to the West Bank, to the inside [of Israel] and to Gaza with its missiles … until we succeed in totally getting rid of the occupier.”

On Wednesday, an IDF source said that “90 percent” of the rocket production know-how of Hamas and Palestinian Islamic Jihad came from Iran.

Former IDF Chief of Staff, Lt. Gen. (Ret.) Gadi Eizenkot said on Thursday that “Hamas has been hit in a very significant manner in the campaign until now. Damage of this scale leads to escalation.”

Speaking at a conference held by the Institute for National Security Studies, Eizenkot said Israel must adopt a strategy that views Hamas as “a bitter enemy that must be defeated,” according to Ynet.

Gaza residents should receive humanitarian assistance in the form of food, medical equipment, water, electricity and sewage infrastructure, but broader reconstruction and the possibility of a seaport should “happen only after the issue of the missing soldiers and captive civilians is resolved,” he said.

Afterwards, said Eizenkot, Israel must address the “central gap” in the monitoring of Gaza to prevent the smuggling of weapons, mainly through tunnels from Egypt, based on the assumption that the Israeli borders and the sea borders are sealed.

The former chief of staff called for a mechanism “for the disarmament of heavy weapons in exchange for reconstruction,” and said that Egypt and the Gulf states, together with the United States, could play an important role in this effort.