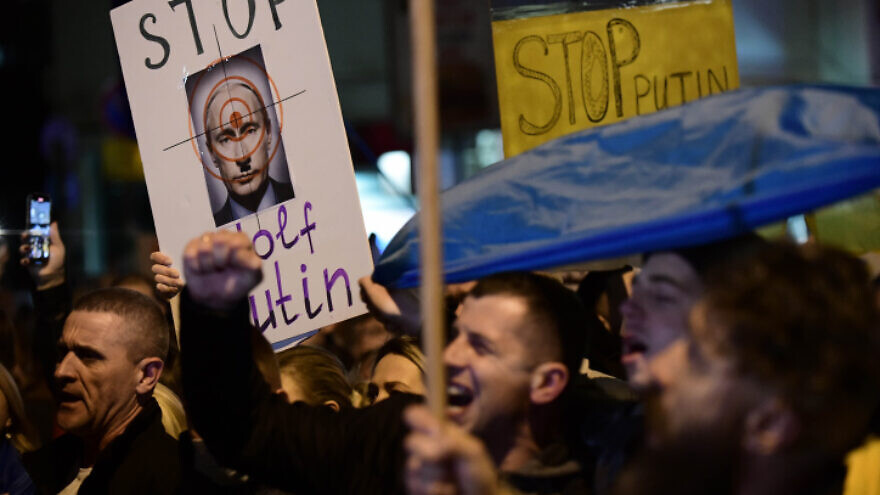 A protest against the Russian invasion of Ukraine, outside the Russian Embassy in Tel Aviv, March 5, 2022. Photo by Tomer Neuberg/Flash90.
Spread the word.
Help JNS grow!
Share now:

(March 6, 2022 / JNS) Hundreds of demonstrators gathered outside the Russian Embassy in Tel Aviv on Saturday evening to demand an end to the Russian invasion of Ukraine.

The protesters held a moment of silence for the Ukrainian civilians and soldiers who have died in the fighting, and denigrated Russian President Vladimir Putin in Hebrew, Ukrainian, Russian and English. They also called on Israeli Prime Minister Naftali Bennett to “wake up” and demanded that Israel open its doors to refugees.

Givatayim resident Alex said: “We call for the end of the invasion and aggression against Ukraine. My grandfather lives in central Kyiv and is scared of going outside. I fear for his life because the city he lives in is being bombarded by the Russian air force. We cannot come to terms with such a crime.”

Nikita, who lives in Bat Yam, said, “My family lives in Kherson under Russian occupation. They have no means of communication because the Russians damaged the cellular network. We are very worried about them and want this terrible war to end.”

Igor Zogorodsky, whose relatives are stuck in a town near Kyiv without the ability to leave, was skeptical that Putin’s meeting with Bennett in Moscow on Saturday would bear fruit.

“Under absolutely no circumstances do we believe Putin the murderer. If it is up to him, we will see an even worse tragedy. Our families must be saved right now so that they don’t die for nothing,” he said.

Meanwhile, Israeli flag manufacturing company Marom FGP has seen a significant spike in the demand for Ukrainian flags. Employees at the company’s factory in Kfar Saba have been working overtime to meet the new demand, which has already exceeded 1,000 orders.

“Every sector of the population is making these purchases, from Ukrainian natives and their families to Israeli born citizens with no direct connection to the Ukrainian people; to small businesses, offices, building committees, and factories in all industries,” said Avi Marom Milberger, chairman of the board of directors and founder of Marom FGP.

“The orders are coming from all over Israel, from Eilat to Nahariya, to Judea and Samaria, and from all sectors,” he added.

Hili Yacobi-Handelsman contributed to this report.