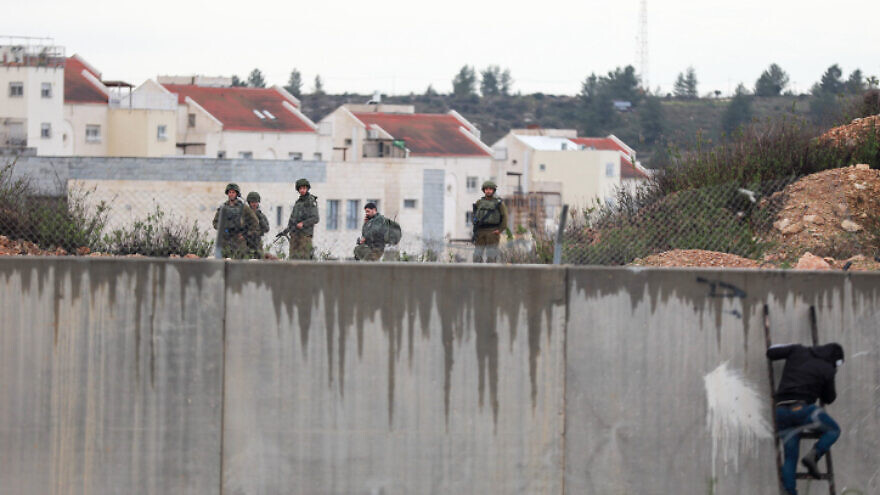 Palestinians clash with Israeli security forces near the security barrier during a protest in the village of Bilin in the West Bank on Feb. 7, 2020. Photo by Flash90.
Spread the word.
Help JNS grow!
Share now:

(April 14, 2022 / JNS) The Israel Defense Forces released new details on Wednesday on the steps it and the Ministry of Defense are taking to reinforce the Judea and Samaria security barrier.

“This includes the repairing of breaches in the fence, digging trenches to stop illegal vehicle crossings and additional defensive measures. Additionally, engineering units are strengthening the defensive measures in the area,” the IDF stated.

In addition, following a situational assessment, “a decision was made to reinforce the Central Command’s engineering units with three heavy machinery units and Combat Engineering Corps reservists from the Central Command,” it said. “Additional engineering tools from the Combat Engineering Corps will be deployed to the buffer zone near the security barrier, alongside the continuation of counterterrorism efforts and apprehensions of terrorist suspects.”

Kochavi said in a statement that “our mission is to secure the security barrier in order to prevent illegal infiltrations. We will continue to act everywhere, with any means necessary and for as long as it takes to counter-terrorism. Over the past few days, we have significantly reinforced the area with soldiers and engineering means in order to improve the defensive infrastructure of the security barrier.”

Israel’s Security Cabinet approved on Sunday a 360 million shekel ($112 million) plan to extend the security barrier by 40 kilometers and to close some of the gaps in the fence, according to a statement from the Prime Minister’s Office.

In recent weeks, two Palestinian terrorists from the Jenin area infiltrated Israel via gaps in the fence in separate attacks.

On April 7, three Israeli civilians were murdered in a shooting attack on a Tel Aviv bar.

On March 29, three Israelis and two Ukrainian nationals were murdered when a Palestinian terrorist went on a shooting rampage in Bnei Brak.

Both terrorists illegally entered Israel through gaps in the barrier.