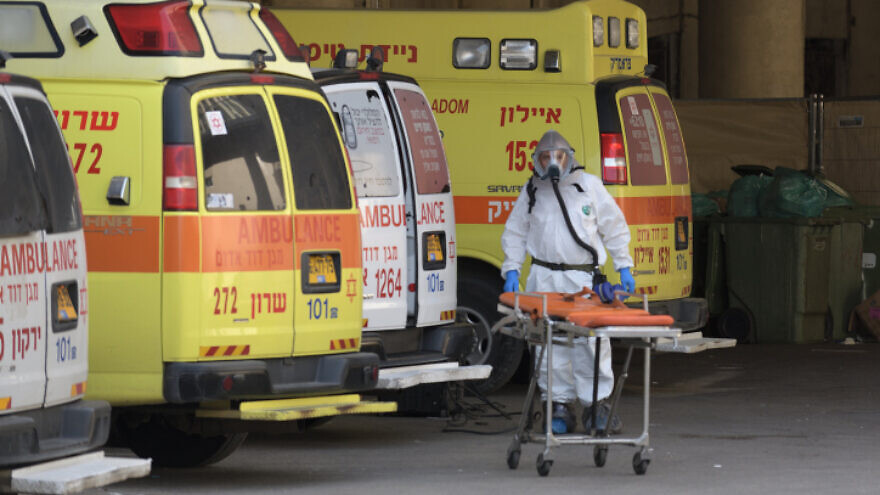 (March 26, 2020 / JNS) The Israel Defense Forces was ordered mid-week to take over care for senior and vulnerable members of civilian society. Israeli Prime Minister Benjamin Netanyahu instructed Defense Minister Naftali Bennett to formulate a national plan for how the military will get food, medical equipment and other basic needs to vulnerable members of society.

Following the directive, defense officials, including the commander of the IDF Home Front, the deputy IDF Chief of Staff, and a senior aid responsible for civil defense, created the first part of the plan, which will involve the IDF working with local authorities to map out the elderly population.

The map will include data on their various needs, communications means with them and the logistical nodes needed to start moving commodities to the civilians. The plan will be presented to Bennett for approval in the coming days.

“The coronavirus harms the elderly population much worse than it does young people,” Bennet stated. “Therefore, at the core of the national program will be the directive of protecting the elderly and the high-risk population.”

The pandemic did not halt a joint Israeli Air Force-U.S. Air Force F-35 air drill in Israeli skies. Aircraft from both countries drilled real-world conditions, though all briefing and debriefing occurred via video conference, the military said.

‘Our aim is to always be one step ahead of corona’

Meanwhile, the Defense Ministry’s Directorate of Research and Development announced on Wednesday that a new application has been developed that will take sample voices from carriers and patients, and use an algorithm to identify the specific vocal “fingerprint” of those infected by the virus, apparently by close measurement of their breath patterns.

“This information will be useful in both early diagnosis and in the monitoring of patients to detect the deterioration or improvement in their health,” said the Defense Ministry. A ministry team is conducting a trial together with Israeli startup Vocalis Health, which is developing an artificial-intelligence-based  platform that tracks and monitors health issues through voice sampling in order to detect virus symptoms related to the patient’s respiratory system.

“The advantage of this monitoring system is that it can be conducted from afar in order to prevent the spread of the disease and overburdening of the national health-care system,” the Defense Ministry said in a statement. Preliminary results of the study are expected within four to six weeks. 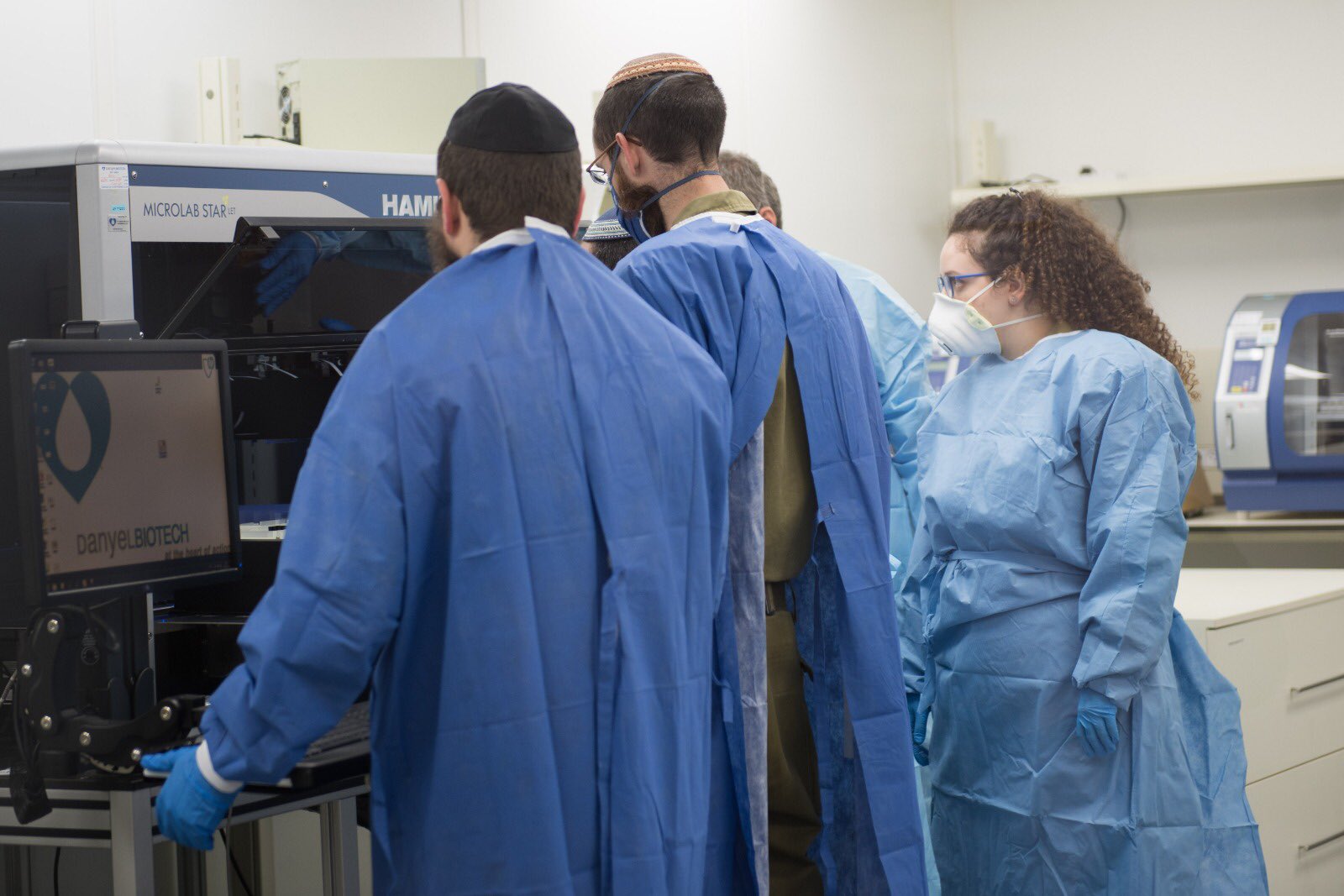 A special medical laboratory dedicated to processing COVID-19 test results of military personnel has been established by the IDF Medical Corps with the ability to analyse hundreds of test results each day. Credit: IDF Spokesperson’s Unit.

Earlier this week, the Ministry announced that Brig. Gen. (res.) Dr. Dani Gold, head of the Research and Development Defense Directorate, and who also ran the program to develop the revolutionary Iron Dome air-defense system a decade ago, will lead a multi-disciplinary national emergency team to battle the spread of the SARS-CoV-2 virus.

The team will focus on several areas of development, including rapid diagnosis and early detection of virus carriers; prevention of virus transmission and subsequent infection of large portions of the population; medical monitoring; and the prevention of infection within hospitals. It will also examine more effective ways of the sanitizing and cleaning of surfaces and spaces, and new ways of manufacturing protective equipment for medical staff.

“The team is using advanced technology, both civilian and military, to develop the aforementioned capabilities. This includes the use of big data, artificial intelligence, command and control systems, various sensors and mobile technology,” said the Defense Ministry.

“Today, we are establishing an ‘elite unite’ that will identify and develop advanced technology to fight the spread of the coronavirus,” Bennett said on Tuesday. “Our aim is to always be one step ahead of corona in order to ‘flatten the curve.’ We are operating in several areas, and we will do so continuously. The national emergency team will have all the assistance and resources necessary, at its disposal, so that we can find a solution for the difficult pandemic that we are experiencing. Together, we will overcome this crisis.”

Solutions the team has begun to test also include the use of mobile technology to map the routes of carriers, especially within hospitals and medical institutions, in order to  isolate carriers and prevent the infection of medical staff and others.

“The brightest minds in the country—from all the various sectors—are committed and working around the clock in order to identify and develop the technological solutions that will contribute to the national effort to cope with the corona pandemic. We hope to share good news with the State of Israel as soon as possible,” said Gold.

‘Our first priority remains to defend our border’

The military is also assisting the Health Ministry in transporting tests results to labs and to staff the drive-in test facilities opened in central Israel for civilians.

Soldiers are providing day-care services for children of civilian medical staff as well.

In the future, the IDF may be asked to support a lockdown or regional quarantine, confirmed Conricus. “The IDF would be in an auxiliary position. The Israeli Police would be the lead organization in this and IDF would provide manpower in close coordination,” he explained.

Should a full national lockdown be ordered, the IDF would assign eight infantry battalions to help enforce it—one for each police district. “Troops are training and preparing for that,” said Conricus.

“We are preparing for a similar task in assisting the [potential lockdown] enforcement in Judea and Samaria. Central Command is preparing for that,” he added.

Internally, the IDF has approximately 5,600 service members in quarantine. It has 25 service members who are confirmed infected, two of whom have recovered, and 23 are still infected. None are in serious condition.

“We have more than 240 lone soldiers who are in [isolation in] another recover facility in Givat Olga, near Hadera,” said Conricus.

“Our first priority remains to defend our border and conduct our routine missions. The second thing is the continued enlistment to different combat units, which we are doing this week,” he added. The Givati, Golani and Kfir infantry brigades are all receiving new recruits.

“We have made adjustments on the number of soldiers on each bus and other details. But processes are ongoing and not overly affected by the coronavirus situation,” said Conricus.

In addition, a military lab under the IDF Medical Corps will soon be conducting coronavirus tests for military personnel, alleviating the pressure on civilian labs. Conricus said “we are targeting a few hundred tests to be conducted each day.”