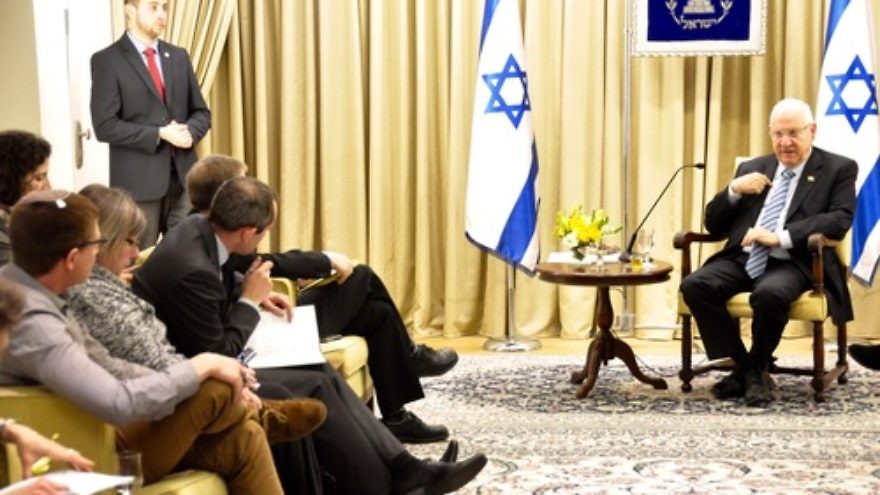 (April 22, 2015 / JNS) You could call it Israel’s version of former U.S. president Franklin D. Roosevelt’s “fireside chat.” President Reuven Rivlin, 75, sat down with English-speaking reporters in advance of his first Israel Independence Day as head of state, and laid out both his vision and his concerns for Israel’s future.

Rivlin, a seasoned Likud party politician and scion of a prominent family that traces its roots in Jerusalem back eight generations, took office last July, and the chat with reporters revealed what has been on the new president’s mind over these past months as well as the themes that will mark his term in office.

The tone of the Rivlin presidency is markedly different than that of Shimon Peres, his predecessor. Peres was seen as a senior statesman of the world, counting presidents and celebrities amongst his admirers, while Rivlin displays a more down-to-earth, man-on-the-street demeanor.

Rivlin articulates what many regular Israelis may feel—but how many other world leaders question the future existence of their state?

“For me, until now, it’s not obvious that we are in a position that Israel is a fact and will last forever,” Rivlin states, while noting that he is routinely moved to tears by the raising of the Israeli flag and the singing of the national anthem.

As president, Rivlin does not mince his words, and even as he emphasizes his pride in Israel as a democracy in which all Israeli citizens have the same rights and responsibilities, he adds that the Jewish people “has the right to define itself as a nation, not only as a religion… and it’s difficult to explain that to Arab citizens. They are asking whether they are part of Israel and they have a conflict with their loyalty, whether it’s to the state or to their people, and we are in a sort of tragedy.”

Several times during the free-ranging discussion that took place at the president’s official residence, Rivlin referred to the situation of Israel’s Arab minority as “a tragedy.”

Since taking office during a period of heightened tension following last summer’s war in Gaza, Rivlin has gone out of his way to condemn violence against Israeli Arabs and to promote co-existence initiatives.

“We have to learn how to live with our citizens, the Arab Israelis. They’re Israeli citizens, not ‘the other,’” Rivlin explains. “They’re represented in the Knesset and I’m proud of that.”

He adds, “Unfortunately, if you go into a Jewish kindergarten today and ask what is evil, they’ll say Arabs, and in an Arab kindergarten they’ll say Jews and Israeli soldiers—that’s horrible. We are in the majority, so the responsibility is on our shoulders.”

With regard to the rise of Islamist fundamentalism in the Middle East, Rivlin states, “We have no war with Islam. No one in Israel believes that. There are fundamentalists in every religion.”

Rivlin has surprised many Israelis and outside observers by his frequent emphasis on democratic values. “I believe there should be a Jewish state because the Jewish people have no other state,” he says. “At the same time, I cannot live in a Jewish state that is not democratic.”

“Democracy is a Jewish value,” says Rivlin. “There is no conflict between Jewish ideas and democratic ideas. Zionism means we have to solve the problem of how to live together in a Jewish and a democratic state.”

Rivlin told reporters that he plans to visit both Arab towns and haredi Jewish communities to spread the message that every citizen has equal responsibilities, and to convince those sectors of the population to take part in national service.

On the thorny topic of Israel-Diaspora relations, Rivlin alluded to the critical remarks he made about Reform Jews in a 1989 visit to the U.S., and explained that while not observing every ritual today, he was raised in and still prays in Orthodox synagogues. Rivlin believes the definition of a Jew is the halachic (Jewish legal) definition—“but everyone who believes he’s part of the Jewish people, I respect his beliefs,” he says.

Reflecting the outlook of many Israelis toward Jewish tradition, Rivlin says, “If I lived in Boston or New York, maybe I would prefer that my wife would sit next to me [in synagogue] if I was brought up that way, but I was brought up traditionally. When I saw the intermarriage in America, it surprised me because I know that in Israel 80 percent of Jewish people are not Orthodox and keep less mitzvot, but everyone would like to be born as a Jew, to become bar mitzvah as a Jew, and married and buried as a Jew.”

For Rivlin, the matter of conversions is clear-cut. “The Knesset voted and thus, by Israeli law, conversion is a matter not only of halacha. Those laws were adopted because of political power being played in Israel,” he says.

“You can change it if you would have the political power,” Rivlin continues. “If, for example, 2 million Reform Jews would come to Israel, the law would be changed. If, for example, they would have 30 members of Knesset, I’m sure they could change the law.”

As Israel’s 67th birthday is celebrated, the president says that the country “has managed to build something much more than just a safe haven. The Jewish people are part of the free world and bring prosperity to the world.”