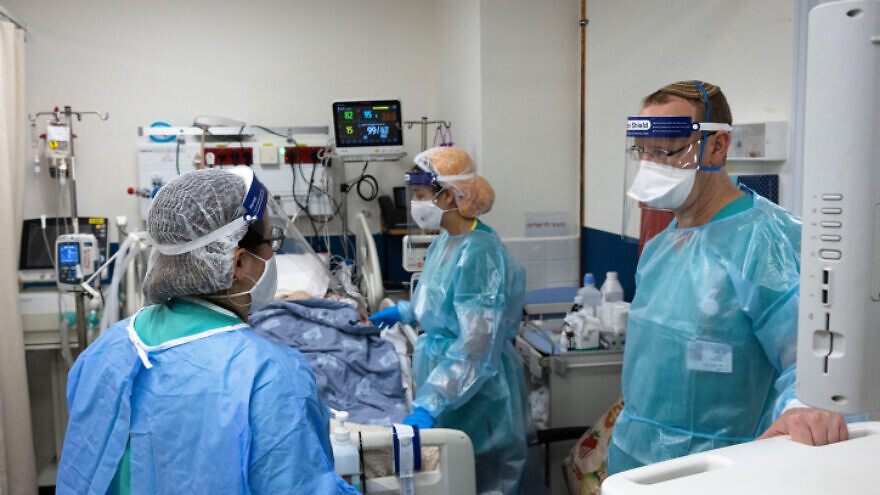 (February 9, 2022 / JNS) If COVID-19 is supposed to be a disease of the unvaccinated, then why are so many vaccinated people in such severe condition in Israel, one of the world’s barometers of how the numbers of those affected add up, as well as a predictor of how the Pfizer vaccine has performed?

The hallmark of the Delta wave was hospital wards filled with people who refused the jab. But now, with Omicron, Israeli medical experts said that COVID has become a disease of not only the unvaccinated but also the fully vaccinated elderly with underlying and chronic medical conditions.

“The vaccinated get infected, and the disease could be like the flu or it could kill you; you just don’t know,” said Sheba Medical Center’s Yael Haviv-Yadid.

Last week, Tel Aviv Sourasky Medical Center’s Dr. Jacob Giris made headlines when he told Israel’s Channel 13 that 80% of severe cases at his hospital are those who have been fully vaccinated—meaning two shots and a booster—a number that has dropped to 70%, he told JNS on Monday.

The headline made its way through the social networks, filling the feeds of conspiracy theorists and anti-vaxxers, who used the statement to prove that the vaccines are not only weak in the face of Omicron but are also not preventing those who took them to develop serious cases of the disease.

Giris explained that most patients coming to his hospital, however, are checking in for other conditions and then tested positive for the virus. COVID-19 is often not the cause of their death with mortality rates from Omicron low anyway.

“The picture is impressive,” Giris said of the 70% statistic, “but when we go to the details of the characteristics of these patients, we see that all of these patients in severe condition are severely affected by other diseases that would cause the same level of illness if they didn’t have corona.”

He said these are patients that in any other year would be seen in the hospital’s internal medicine wards with influenza or other viruses or infections.

“Corona is a trigger, but it is not the cause of their severe condition,” stressed Giris. 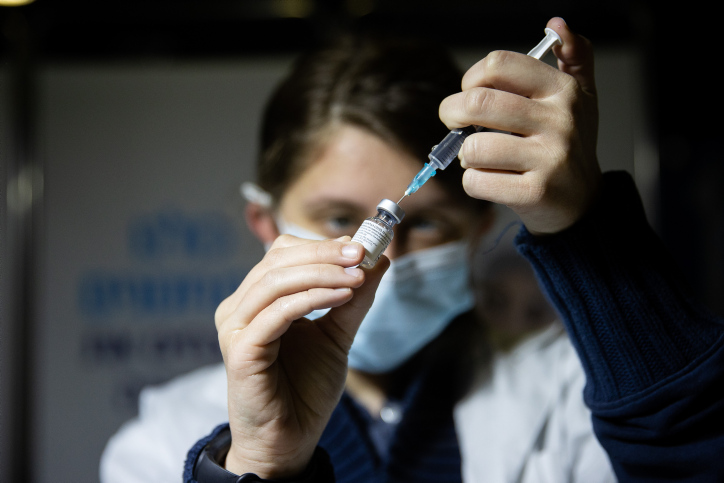 A medical worker prepares a COVID-19 vaccine injection at a vaccination center in Jerusalem, Feb. 4, 2021. Photo by Yonatan Sindel/Flash90.

‘The health-care system would collapse’

The Omicron variant is by some reports even 50 times more infectious than its Delta predecessor. But the virus also causes mostly mild disease in the upper respiratory tract—a sore throat, muscle aches, fatigue and maybe fever for three or four days.

The mortality rate is also more similar to flu than the Wuhan strain of the disease, which killed as many as three out of every 100 people who contracted the virus in some countries during the first wave, said Giris. Today, only around one in 1,000 people in Israel are likely to develop severe disease or die from coronavirus.

“Imagine that we had corona, like during the Delta wave, but 2 million or 3 million infected people—the health-care system would collapse,” said Giris.

At the same time, because the virus is so contagious, even people who have made efforts to protect themselves by vaccinating are contracting it.

A Sheba study published towards the start of the Omicron wave found that two shots of the Pfizer vaccine taken more than six months prior were not protective against Omicron and that a fresh vaccine or a third shot was less than 40% effective against the variant.

Since January, 1,875,619 have been confirmed positive for coronavirus, and health experts believe the actual number of cases is as much as three times higher.

Israel has around 1,100 serious COVID patients to date, meaning only 0.022% of an assumed 5 million cases are in serious condition.

In contrast, “Delta was very tough,” said Giris, and “80% of our patients were unvaccinated.”

This time, he said, the virus is attacking the vulnerable—those who have pre-existing medical conditions. He explained that his COVID patients have severe diabetes, uncontrolled hypertension, congestive heart failure, and cerebral and neurological diseases. And when the Health Ministry reports patients as severe—criteria based on the percentage of oxygen in an individual’s blood as defined by the World Health Organization—they are severely ill but not necessarily with the virus.

‘Jerusalem is higher than in other places in the country’

Dr. Dror Mevorach, director of Hadassah’s Research Center for Rheumatology and Internal Medicine B, told JNS that one of the reasons that so many patients with pre-existing medical conditions are getting severely ill from Omicron is because their immune system is already compromised, and they did not respond well to the vaccine in the first place.

Giris’ point about people with chronic diseases was corroborated by doctors at some of Israel’s other top hospitals—Sheba, Hadassah Medical Center, Galilee Medical Center and Shaare Zedek Medical Center—though in some of these hospitals, the percentage of unvaccinated severe patients is equivalent to or far surpasses the vaccinated.

Hadassah is treating between 140 and 150 patients in its two hospitals on Mount Scopus and in Ein Kerem; Mevorach said about 85 are in severe or critical condition, including 20 who are intubated. Most of them are either vaccinated with significant diseases or unvaccinated.

Dr. Emil Aga, an epidemiologist at Galilee Medical Center said that 50% of serious patients are vaccinated, though most of them received their third shot more than four months prior and all of them have underlying medical conditions.

And at Shaare Zedek, where 180 COVID patients are being treated, including 80 in severe condition, most of the serious and ventilated cases are unvaccinated, said Dr. Ariel Rokach, director of the hospital’s Respiratory Support Unit.

“The number of COVID patients in Jerusalem is higher than in other places in the country,” Rokach told JNS. “I don’t want to say that the population of Jerusalem is not cooperative, but we know that the percentage of vaccinated people among the Arab groups and the ultra-Orthodox is lower than among the general population. This may be why we have more patients than in other places.”

Rokach added that those who are vaccinated and in serious condition at his hospital are all people with severe underlying or chronic illnesses.

Israel should expect more cases of vaccinated people getting severe COVID-19 than unvaccinated, even as the Omicron attacks the most high-risk, simply because there are more people who are vaccinated than not.

Israel has a population of 9,408,100, of which around 781,000 are children under the age of 5. More than 6 million Israelis are vaccinated, which means that unvaccinated adults compose less than one-fourth of the population, noted Mevorach, “but there are much more [unvaccinated] represented in the severe and critical patients.”

As of Feb. 7, there were 635 patients in serious condition who were either unvaccinated or received two shots more than six months ago—53% of the critical patients at the time of calculation.

They did say that they are seeing only a handful of individuals who had a fourth shot of the vaccine, if any at all, though they stressed that this added dose is only recommended for people at risk of severe disease. Haviv-Yadid said there have been no patients with four doses who have entered the intensive-care unit at Sheba.

“Patients that were vaccinated four times can still be infected by the virus, but it has a good effect against severe disease and death, and this is the most important thing,” Rokach said. “I believe hundreds of people could have died if they were not vaccinated with the fourth vaccine. I assume instead of 1,200 severe patients, we might have 2,000, which is a number that the hospital could not manage to treat.”

With more than 900 people dead in the wake of Omicron, health officials believe that this wave is starting to wane and hope that with so many individuals infected, the world will have a long-awaited reprieve. Still, they noted that just as Delta turned into Omicron, there is no guarantee what the next variant might bring.