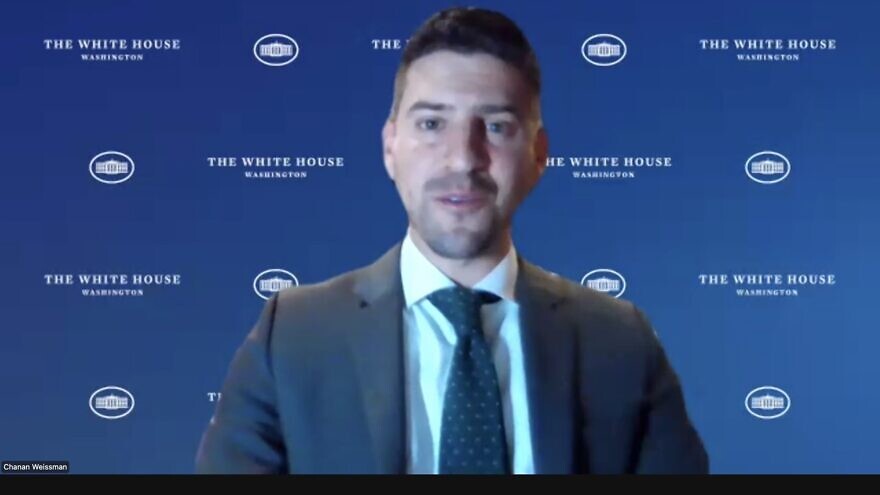 (April 11, 2022 / JNS) Hours before a terrorist attack in Tel Aviv on April 7, Biden administration officials told members of the American Jewish community from across the country that they were hoping for calm in the region as the three religions celebrate major holidays.

White House liaison to the Jewish community Chanan Weissman hosted a pre-Passover briefing with as many as 1,000 members of the American Jewish community over Zoom, where he invited administration officials to speak about the two major areas of concern for the community.

Joining the briefing on behalf of the U.S. State Department, Yael Lempert, acting assistant secretary of the State Department’s Bureau of Near Eastern Affairs, spoke about U.S. Secretary of State Antony Blinken’s recent visit to the Middle East and North Africa, where he spent time in Israel and attended the ministerial meeting with leaders from Israel and its Arab allies in the Negev Desert.

Lempert first began by offering condolences on behalf of the administration for the “senseless terrorist attacks” on Hadera, Beersheva and Bnei Brak over the past two weeks, which killed 11 civilians. Three more people were killed in the Dizengoff Street attack in downtown Tel Aviv, making a total of 14 dead in a matter of weeks.

She told those who joined the briefing that U.S. President Joe Biden spoke to Israeli Prime Minister Naftali Bennett after the attacks and offered assistance.

“The administration is deeply concerned about the increase in violence and the potential for more, and deeply vested in preventing that,” she said, adding that one of Blinken’s top priorities during the visit was to urge calm between Israelis and Palestinians.

“In April, there’s a confluence of Ramadan, Passover and Easter, which sadly has been a volatile mix historically in Jerusalem, in particular, and we are monitoring the situation closely,” said Lempert. “We’re working with Israel, the Palestinians and Jordan in an effort to de-escalate tensions, avoid violence and allow for people of all faiths to celebrate peacefully this month.”

Overall, said Lempert, the administration continues to work to prevent actions that raise tensions and make a two-state solution unachievable, such as incitement to violence, payments to individuals (and their families) convicted of terrorism, settlement expansion, settler violence and home demolitions.

The administration, she said, welcomed recent developments to provide 20,000 work permits for Palestinians, increased water sales and thousands of residency permits in the West Bank.

Lempert added that the Negev Summit was truly “history in the making.”

“The Abraham Accords and the normalization agreements, and now the Negev ministerial, have created the opportunity for nothing short of transformation, and they demonstrate what is possible when countries put aside their differences and build bridges,” she said. “As Secretary Blinken noted, this gathering really would have been impossible to imagine just a few years ago.”

Despite criticism the administration has recently been receiving from lawmakers from both parties over its efforts to negotiate re-entry into the Joint Comprehensive Plan of Action (JCPOA) with Iran, Lempert said that the negotiators are working through complex issues and that the onus is now on Iran, though she added that the administration has prepared a scenario if a deal is not agreed to.

“I understand that perhaps some on this call may have serious doubts about returning to the deal, and I respect that, but President Biden and the Secretary of State are convinced it is the best way to restore strict limits on Iran’s nuclear program and restore the IAEA’s most stringent inspection regime ever negotiated,” she explained. “I know the criticism, but our critics haven’t come up with an alternative. Even the toughest sanctions combined with the ravages of COVID-19 didn’t cause Iran to slow down its nuclear advances or regional activities. Quite to the contrary.” 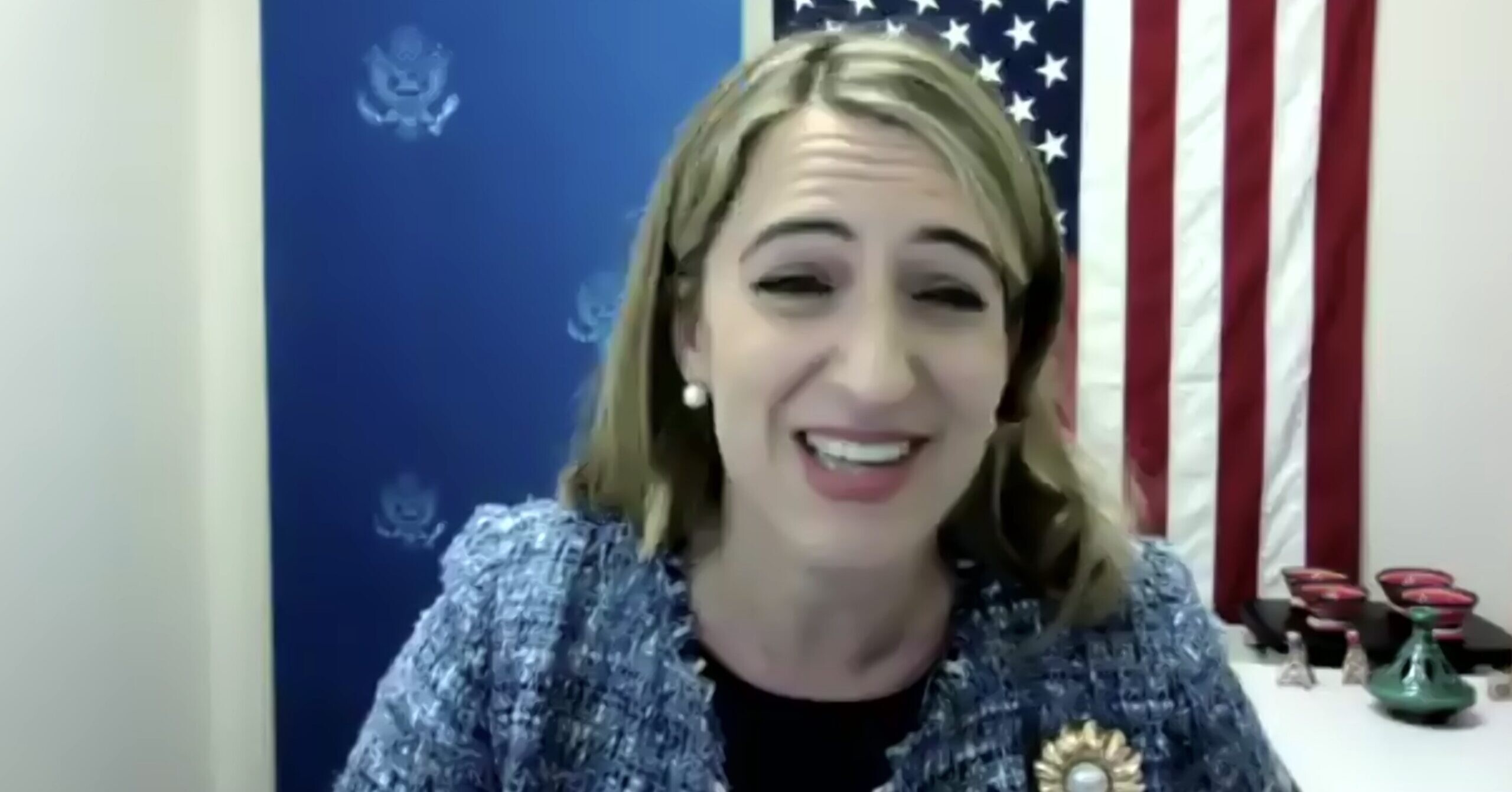 ‘Actions taken to try to fulfill those needs’

The second half of the briefing focused on the conflict in Ukraine. Weissman noted that few-foreign policy issues have galvanized the American Jewish community as much as the Russian invasion of Ukraine.

To speak for the administration about Ukraine, Weissman introduced Matt Miller, special advisor for communications at the White House National Security Council.

He began by speaking about Biden’s recent trip to Poland and Belgium, and the speech he delivered in Warsaw.

Miller said Biden tried to emphasize that the war is not just about Ukraine, but whether a nation’s citizens are able to live in a world where one country can change the boundaries of its neighbors by force, coupled with the struggle between democracies and autocracies.

“We’ve really have tried to have a three-part response to number one, support Ukraine; number two, impose costs on Russia; and number three, rally our allies and partners in NATO and throughout the democratic world,” he said.

Miller said that the administration has been heartened by the unity of countries around the world, but even more so by the bipartisan nature of support for Ukraine in the United States among lawmakers, corporations and individuals.

He also spoke about the aid the United States is providing Ukraine, both military and humanitarian.

Miller was asked about why fighter jets from Poland were not able to be given to Ukraine and why a no-fly zone has not been enacted.

Miller replied that the government’s position was not against Poland providing the MIG-29s to Ukraine and that it was the sovereign decision of Poland to do it. But the proposal was to transfer the airplanes from their custody into the custody of the United States at a U.S.-NATO base in Germany and then fly them to Ukraine.

He said the United States was opposed to the proposal because having jets flown from a U.S. military base into contested Ukrainian air space could potentially escalate the conflict.

The administration also made the assessment that they could keep the skies over Ukraine contested by providing other types of weapons like surface-to-air missile systems.

“And one of the things that’s sometimes hard about this process, there are so many systems that we move in that we are not able to talk about either because number one, the third-party country doesn’t want to make it public, or number two, for operational security reasons, we don’t want to tell the Russians what we’ve moved in,” said Miller. “And so, there can be a perception sometimes that we haven’t gotten these weapons to Ukraine, when, in fact, we have. We just can’t talk about it because we don’t want to give Russians the targets to go and try to hit.”

As far as a no-fly zone, Miller said that what that means is American combat aircraft taking off from NATO airspace and engaging in direct combat with Russian aircraft over Ukraine. Some people, he said, think that it’s a step that is less than “boots on the ground,” when in reality, it has the same escalatory risk and will almost certainly lead to direct conflict between American and Russian forces.